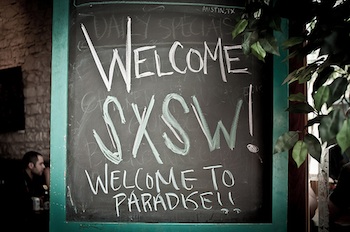 SXSW is easily the most chaotic yet inspiring experience in the music industry. Photo by Luca Sartoni via Flickr

SXSW is easily the most chaotic experience in the music industry. For the 14,000 people that attend the music conference it provides opportunities to immerse themselves in the ecosystem that powers much of the global business. It is one of the best times to tee up deals and relationships that could power significant developments for the rest of the year. As it grows each year, it becomes a more and more complex beast that can overwhelm even the most experienced attendee. If you missed it, haven’t ever been, or just couldn’t cover all the ground this year, here are the things I am still thinking about a few days after the conference ended.

Although I was mighty impressed with a number of technologies and initiatives, I did not feel there were any seismic revelations or leaps forward — and I see this as a good thing. After years and years of people jumping onto the next big thing in hopes it would “save the industry,” we are finally seeing the maturation of essential product and service verticals. Best-of-breed platforms across all categories are solidifying, with growing (and reasonably stable) companies providing analytics, on-demand and streaming content, direct-to-fan marketing and sales tools, smart phone technologies, and integrating social sharing into almost every type of engagement. Instead of looking to add more and more low-value features, players are focusing on industry horizontals and partnerships to leverage existing technology to expand their feature set.

The new wave of [mobile] apps are finding ways to use music as a social link to engage friends both online and off."

The trend in music apps has traditionally been to surround existing content with a way to interact with it. The new wave of apps are finding ways to use music as a social link to engage friends both online and off. The music itself is starting to take a backseat to the experience that it can foster.

An interesting example of this is Roqbot, an app that allows people to choose the songs playing in public venues, vote on the queue, and connect with other users of the service. Roqbot won the music category of SXSW Accelerator, a program sponsored by Microsoft that seeks to discover and acknowledge technology advancements across many categories. Roqbot has licensed a 5 million song library, but use of the service does require the participation of the venue. It may not be a game changer but it certainly opens up an entirely new way to experience music socially.

People from streaming and on-demand services were out in full force at SXSW, participating in panels, sponsoring events, and pushing their agendas. Fortunately, much of the conversation was about user adoption concerns and how to hit critical mass. It is still a crowded marketplace, and differentiation isn’t easy, but features around social and music discovery are proving valuable.

A report released during SXSW predicts these services will reach over 161 million subscribers by 2016, citing a steep increase in smartphone usage and a decreasing focus on the notion of ownership. This is by far the most optimistic prediction I’ve seen, and it doesn’t address a number of hurdles, which are outlined here. But the report’s prediction of 5.9 million subscribers by the end of 2011 seems attainable.

I am sure players including Rdio, Spotify, Slacker, and Rhapsody hope to see these predictions come true.

A few things never change about SXSW. The first, and what I believe to be the cardinal rule, is to book your hotel room as early as possible. Staying downtown is essential — you need a place for private rejuvenation throughout the day, and catching a ride home at 3 a.m. is an arduous task. With more than 35,000 total attendees in 2011 (and rising every year), a good place to rest your head is getting harder and harder to find.

Second, RSVP for anything you think you might want to attend. It can be a massive task, so consider using an assistant or a service such as Amazon’s Mechanical Turk.

Lastly, it really still is all about the music. Technology and buzz mean nothing if the experience doesn’t move you. Who moved me? Odd Future, Yuck, OFF! and Duran Duran in the smallest venue I have ever seen them in.

Only 51 more weeks till we do it all again…

> Oversharing, Overstimulated and Setting Boundaries at SXSW by Jessica Clark

> Fresh from SXSWi: 6 Ways to Integrate Hacking in Newsrooms by Nathaniel James