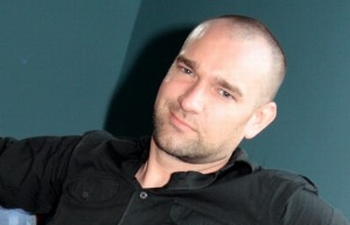 David Shankbone is arguably the most influential new media photojournalist in the world.

He has taken over 1,000 portraits of prominent people across a variety of fields for articles on Wikipedia.org and its foreign language equivalents. Because the pictures are copyleft — or free for reproduction, alteration, and distribution — they are used by numerous non-profits, schools, authors, television programs and well known publications, such as the New York Times and the Miami Herald.

The jig is up: Everybody knows that it's impossible [for a journalist] to be totally neutral." - David Shankbone

He has also interviewed leaders ranging from Al Sharpton to Israeli President Shimon Peres and given presentations in the United States and abroad about Wikipedia, new media and Internet culture.

But, as a recent Columbia Journalism Review article about this famous Wikipedian revealed, Shankbone isn’t even his real name and journalism isn’t his profession. It’s David Miller and his day job is doing legal work on Wall Street.

In spite of all that, Shankbone has had a big influence on the development of web culture. In a discussion conducted via email, I asked Shankbone about his controversial contributions to Wikipedia, the way the web and WikiLeaks are changing journalism, and what he thinks legacy media organizations need to do to survive in the digital age.

Your portraits of famous people range from Taylor Swift to Gore Vidal, and they have been used by news sites ranging from Vanity Fair to Forbes. Do you identify yourself as a photojournalist, artist, or what?

Shankbone: Probably more of an artist. Information is realist art and I create information. The challenge to be empirical was more exciting for me than infusing my work with my own perspective.

A few years ago your photo documenting the making of an adult film was banned by the Australian government. Do you think the Internet pushes society’s limits of what is acceptable, or does it reflect what is already there?

Shankbone: Knowledge pushes those boundaries. Few aspects of society are hidden any more and Wikipedia’s approach to unadulterated information plays a hand.

Another one of your photos, “Palestinian Boy with Toy Gun in Nazareth” (below, left) you placed on the Wikipedia article Children and Minors in the Israeli-Palestinian Conflict. This caused controversy because some critics believed you were trying to push a political view, since you had taken it on a press junket that was funded by the Israeli government. What prompted you to choose that photo?

Shankbone: I saw the photograph and thought about the debate over whether children playing with toy weapons increases violence. A few years earlier in Israel, a child with a toy gun was shot by a soldier — something that also happens in the United States with the police. There was also a study in Israel about the psychological effects the conflict had on children. So, given all of that, I thought the photograph of a child in Israel with a toy gun worked.

It was only a few people who took the worst possible interpretation, which is that I was portraying this child as a terrorist. At the same time I placed Palestinian Kids in Nazareth, a photo of his friends hugging, on the Friendship article, and that photo is now found on the Palestinian people article.

How do you feel about the role digital media is playing in the Middle East protests?

Shankbone: Satellite and Internet make it impossible to control what people know. I am as nervous as anyone about how it will all look a year from now, but the desire of a nation to be freer and find its own voice is something to be cheered, even when it’s not clear that it’s in America’s best interest.

What impact have the Internet and bloggers had on journalism?

Shankbone: Corporatism hurt American journalism and the Internet exposed that it was no longer functioning as the Fourth Estate. New York Times executive editor Bill Keller admitted that the government vetted the Wikileaks cables before [his paper] published them. What a far cry from the Pentagon Papers. It’s a problem. We need the media. But everyone across the political spectrum is angry because too often journalists fail at what they purport to do.

Shankbone: WikiLeaks means the public will expose lies, horror, and hypocrisy if the media won’t. The best analysis is on blogs and the best journalism is public or foreign. American reporters crave ‘access’ — and their editors demand it, no matter how much it corrupts.

I recently had a drink with a writer from Gawker and I said, ‘You guys must be invited to so many incredible parties.’ He replied, ‘Believe it or not, we aren’t because people are worried that we will write something unflattering.’ A real journalist should be able to say the same. Instead, I photograph them on red carpets.

Sadly for the foreseeable future, hacks will reign at the Washington Post, the Los Angeles Times will be a degraded mess, the New York Times will fumble along, and cable news will be little better than talk radio.

What changes would you like to see legacy media organizations make in the digital age?

Shankbone: They think to be neutral is to be uncontroversial and to not assert the truth. They think balance means two opposing views and that somewhere in the middle is moderation. Such ridiculous notions have come to define the attempt to present reality to their audiences. The jig is up: Everybody knows that it’s impossible to be totally neutral.

Don’t shout from the rooftops that you have a perspective, just stop insisting that you don’t and try your damnedest not to let it bias your facts. Mimic the example of the profitable Economist magazine, the most respected publication in the world. Fox News would be great if it was a place where the interesting nuance of conservative thought was hashed out before its viewers.

Be daring. Try new things. Newspapers should involve local citizen reporters in their articles, with talent the only barrier to consideration. Discover the good local bloggers and photographers and develop relationships with them. Dispatch them. Pay them a nominal fee. Have regular reporters work with locals and give them one of those “additional reporting by…” credits. That would help foster a cohesive bond with the communities that they serve.

All images by David Shankbone, via Wikipedia.

Sandra Ordonez calls herself a web astronaut who has been helping organizations navigate the Internet since 1997. In the last two years, she has collected over 200 interviews on the future of journalism, and was one of the first Communication Managers for Wikipedia. She specializes in community management, collaboration, and artisan branding. Her official site, Collaborative Nation, is a home for tecno-activists. She also heads up the Facebook page, Bicultural and Multicultural People Rule.” She graduated from American University with a double degree in International Relations and Public Relations.