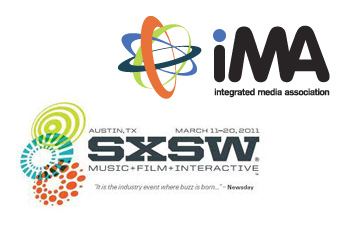 For the first time, the Integrated Media Association conference joined SXSWi, offering a public media track in the interactive festival.

Public media makers found a whole new crew to hang with at this year’s Integrated Media Association (IMA) Conference on March 10 and 11.

Fueling excitement was a new collaboration: The IMA preceded and then flowed into the interactive track of the SXSW festival on the 12th. Attendees at a Knight Foundation-supported array of SXSWi panels on news innovation and content strategy joined the mix.

Despite looming cuts and recent controversies, participants seemed eager both to learn about a raft of recent public media experiments and collaborations, and to meet their online friends and followers in the flesh. This annual public media conference, IMA, has recently been revitalized with new leadership and strategy, and felt much hipper and more cohesive than the last iteration of the conference in 2009.

But don’t just take my word for it. Here’s a glimpse at the conversations through the eyes of attendees — noted in bold — and my own running Twitter coverage at @beyondbroadcast. You can follow a larger discussion of both conferences by going to the #imaconf and #sxsw hashtags on Twitter.

Geez — pack for IMA or glue myself to the screen to track blowback on Schiller’s resignation? #pubmedia, I can’t keep up!

@rbole (Robert Bole, CPB): Getting in the shute: first #imaconf re: #pubmedia analytics, then #SXSW on open APIs and finally #mediafuturenow on digital journalism

@nextgenradio (Doug Mitchell) : @beyondbroadcast Plenty to talk about amongst the faithful at SXSWi. Leaving today for Austin.

Kinsey Wilson (of NPR) at IMA conf: “I am here to tell you that NPR will keep moving forward.”

Learn more about these Top Model projects and the Kindred collaboration platform at publicmediacorps.org.

Latoya [Peterson] from #pubcorps says that “at this moment, #pubmedia needs drastic action if it’s going to survive.”

Beyond the Stream: Mobile Apps that Matter

Wilson: Interesting question re. geolocation app: “How can we get people lost?” Give people rich locative experience

Seth Lind of This American Life: Exciting to be able to feature individual stories on iPad app, offer live content

Lind: “Thinking about mobile has pushed us to think about users way more actively, and it’s just been great.”

@kookster: Mobile is not as forgiving; you have to think about every pixel and what the user is seeing.

@kookster: variability of both networks and devices makes mobile development trickier than web by an order of magnitude.

@kookster: “people feel entitled to have amazing things in their pockets,” & will tell you loudly if you fail to deliver

Lind: Users find push notifications offensive, especially when they are asking for donations

On the platform: Chris Hastings (@chrishast) and Bob Lyons from WGBH re. “Re-thinking Public TV” | http://www.worldcompass.org

Lyons: World is a national digital TV channel that is serving as a platform for independent and international #pubmedia makers

#worldchan is arranged thematically, organizing a variety of content on the channel and online. Sample theme: Skin You’re In #pubmedia

WorldCompass site just got redesigned for the 3rd time in 6 months; will rebrand again/ iterating on the fly #pubmedia #worldchan

#worldchan is demonstrating multiplatform branding and cross-silo collaboration in #pubmedia; example: live video from The Takeaway on site

Lyons: the “visual vocabulary” of seeing the reporter unshaven and on the beat at 6:00 in the morning was exciting

@chrishast “In some ways we’re creating a pipeline for independent makers that doesn’t exist, in addition to PBS” #worldchan #pubmedia

@chrishast “It’s not just about creating a platform for discourse, it’s about solution-based discourse…not the rant” #pubmedia

@MediaFunders: Is it enough 4 public media 2 ask content makers to preformed mold? How can public truly enter the space?

Back at #SXSW — at a panel on new models in #pubmedia, with Orlando Bagwell, Sue Schardt, Jacquie Jones and Greg Pak. How to innovate?

Jones: every year that she’s been at NBPC, there’s been “a watershed event that galvanized an African-American public”

Jones: realized there was no dedicated producer corps within #pubmedia creating content relevant to minority communities — how to address?

Jones: next step was to create the #pubcorps in order to build linkages and skills among young producers and community/#pubmedia orgs

Jones: “There’s still a lot of opportunity to engage new voices and have a real impact in #pubmedia…even though we’re in dicey times”

Bagwell: Is there a possibility for young ideas to lead the future of #pubmedia? Jones: Yes, but it’s really challenging, different process

Jones: “We learned that we have a lot more to learn”

Bagwell: a recurring issue in #pubmedia now is “how do you find the public where they are”

@Schardt: “How in #pubmedia can we harness this invention and energy” of indy producers? MQ2 project: demo project exploring this

@Schardt: #pubmedia #sxsw You have to balance structure with creativity. Learn more about MQ2 here: http://bit.ly/Spreading_the_Zing

@Schardt: We don’t throw out the existing infrastructure, but we have to reflect humanity in a relevant, meaningful way

@Schardt: It’s a tremendous challege to produce authentic #pubmedia at this moment when many institutions are risk-averse

@Schardt: Every one of the MQ2 projects took themselves outside of the structure to deep into communities. #pubmedia led us there

@jayrosen_nyu: the “fantasy of replacement” is a phantom of journalists’ fears re. waning business model.

@jayrosen_nyu: what do journalists have against basements, anyway? pajamas? flies in the face of intrepid journalist stereotypes

@jayrosen_nyu: if it were self-evident that commercial model is better, drawing contrasts w/bloggers would be uneccessary, yes?

@jayrosen_nyu: bloggers turn critique around to claim that big media should be responsible so they can slack off. but press is us

@jayrosen_nyu: “discarded parts [of old news habits] live on in the subconscious…and have come roaring back with blogging”

@jayrosen_nyu: i.e.—Bloggers are the return of the repressed

@jayrosen_nyu: voice is what you take out of modern professional journalism—if you succeed you might one day earn a column

@jayrosen_nyu: “Bloggers disrupt the moral hierarchy” by jumping straight to voice without the discipline of flat reporting

@jayrosen_nyu: It’s time for some psychiatry with journalists—to “get them to tell a better story” about themselves & the world

@jayrosen_nyu: In psychology, you don’t get over the things that have wounded you; instead you can open up space for motion

@jayrosen_nyu: “freedom of the press is a public possession,” the right for citizens to print their opinions

@jayrosen_nyu: “so-called objectivity is a very expensive system to maintain” b/c anything that pierces it threatens outlet

@jayrosen_nyu: The only place we actuallly define journalists is via shield laws and velvet ropes

How PBS and NPR Can Support Local Journalism

Last #pubmedia panel of the day: On what PBS/NPR are doing in the local news space. @janjlab talking about variety in news ecosystem

@janjlab: lots of news innovation happening in silos; not networked in a way that can amplify news/info

Amy Shaw from the Nine Network in St. Louis talking about Homeland project, which we covered here: http://to.pbs.org/9Q6Ja0

Shaw: “I wish there was a more holistic perspective” about how to work in an community news ecosystem

Shaw: people need to “tuck their peacock feathers in at the door” and think about what’s good for engaging community

Shaw: people need to be nudged around creating dialogue around stalled, intractable issues

@amyshaw9net: the master narrative about immigration is demonization and polarization of “undocumented”—wanted to deepen issue

@amyshaw9net: they are training people how to use flip cameras: young people get tech but not story; older folks the opposite

@pubmlicmic: Schaffer: Need to end mentality that once funding is over, project is over

@jacklerner: “#pubmedia can help local news by being a hub, a partner, or an innovator.” – @JLab @janjlab #SXSWlocal #sxsw

@CJERICSON: Video or audio of #imaconf coming soon. Audio this weekend. Video next week. For all attendees & members.

@g5member: Great to meet so many of public media’s creative and dedicated minds at #imaconf. Now, #sxsw time!

Full disclosure: In my role as the director of the Ford Foundation-funded Future of Public Media Project, I am working with the National Black Programing Consortium to incubate their Public Media Corps project via the Center for Social Media, and have also worked with PBS/NPR on the PubCamps and Association of Independents in Radio on a study of their MQ2 project. More details on all of these here: futureofpublicmedia.net.

CORRECTION: One of the tweets above has been corrected to reflect that it was blogger Latoya Peterson — not singer Latoya Jackson — who participated in the Public Media Corps judging panel for the next Top Public Media Model. Apologies!

> Oversharing, Overstimulated and Setting Boundaries at SXSW by Jessica Clark