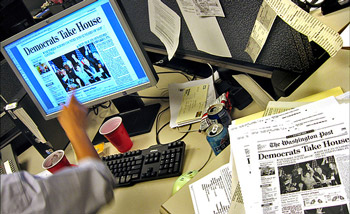 The accidental publication of a Washington Post story that inlcuded an editor's comments has some important lessons for journalists. Photo by Keith Jenkins via Flickr.

It’s rare for the public to see news sausage in the grinder. The gore of the editing process is kept from view. Yet while the factory floor of the newsroom may be less sanitary than a meat processing plant, a glimpse inside the news process may still be more likely to inspire confidence in the final product.

We got such a glimpse earlier this month when a draft version of a Washington Post article, with detailed editor’s notes, was accidentally published online. The following morning, the mistake was noted by Hamilton Nolan on Gawker. Nolan republished the full article “in case it gets pulled.” Soon after, the Washington Post’s story was removed and replaced with an apology: “An incomplete story was published to this web page. We apologize for the confusion and inconvenience.”

Editors aren't there to merely pat you on the back. Their job is to make your work better and hold you accountable for your words."

First, let me acknowledge that mistakes happen. Regardless of how much we think we’re perfect, none of us are. That doesn’t excuse errors, and this post isn’t about blame. As the saying goes, wise men learn from the mistakes of others. And I believe this is a great case study teachers can use to illustrate some important lessons in modern journalism.

The Importance of a Good Editor

In the Columbia Journalism Review, Joel Meares called the embarrassing publication of editors’ notes “most writers’ worst nightmare.” If you’re unprepared, it can be a shock to have your work heavily scrutinized. That pain is multiplied if your shortcomings are exposed in a public way. But editors aren’t there to merely pat you on the back. Their job is to make your work better and hold you accountable for your words.

The editor’s notes reveal an attention to both the story, which is about the relationship between cervical cancer and access to health care, and its context online. Below I use excerpts of the edited story (with the editing notes in ALL CAPS) to highlight five lessons the editor is imparting upon the writer. They’re valid for anyone who teaches or practices journalism.

“It changes you in such a profound way. You have to rebuild your whole life.” THE QUOTE YOU NEED HERE, GIVEN THE REST OF THE PIECE, IS ABOUT HOW SHE COULDN’T AFFORD THE HEALTH INSURANCE.

2. Numbers need to be specific.

Studies show that 50 percent to 70 percent of women who develop cervical cancer haven’t had a Pap test in at least five years. CAN YOU GIVE ME A URL TO HYPERLINK TO FOR THIS?

THIS SHOULD BE IN THE SIDEBAR: According to the CDC, about 33 million doses of Gardasil were distributed nationally as of mid-February, and 18,354 reports were made to the Vaccine Adverse Event Reporting System about problems following inoculation.

The Push of a Button

It turns out the day of the mistake, March 14, was a significant day for Washington Post readers and staff. It was the day the organization launched a new version of their website. And it wasn’t merely a visual update for readers. They also changed the content management system, or CMS, used by staff to run the website.

Managing editor Raju Narisetti ran an online chat to answer user questions about the redesign. One person asked about their choice of CMS. Narisetti said, “Eidos is an XML-based system that will allow us to work with many emerging technologies and platforms a lot faster than we would otherwise be able to.”

Eidos Media created Méthode, a CMS that allows publishers to combine online and print publishing into one system.

The week after, Post ombudsman Patrick Pexton responded to readers about the redesign.

“The redesigned website is just the surface manifestation of a huge organ transplant,” he said, pointing out it took more than a year to complete. The most important remark was his description of how difficult the change had been. “Every newsroom employee is struggling with it, not just the tech people.”

What would otherwise be a footnote for CMS geeks now brings the mistake into focus. And that brings us to the takeaway: It only takes one click to embarrass yourself and your company. We’ve seen it before. This isn’t the first time and it won’t be the last. It’s easy to click quickly, especially if you’re in a hurry. It’s not obsessive-compulsive or paranoid to slow down to double-check; it’s part of being responsible.

Nathan Gibbs teaches multimedia journalism as an adjunct instructor for Point Loma Nazarene University and the SDSU Digital and Social Media Collaborative. Gibbs oversees multimedia content as web producer for KPBS, the PBS and NPR affiliate in San Diego. He played a key role in the station’s groundbreaking use of social media during the 2007 Southern California wildfires and continues to drive interactive strategy. Gibbs is on Twitter as @nathangibbs and runs Modern Journalist, a blog for journalists exploring multimedia.