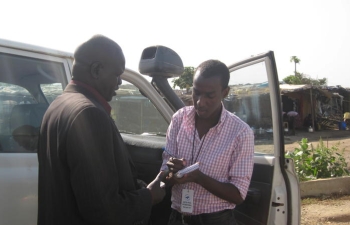 Education content on MediaShift is sponsored by the USC Annenberg nine-month M.A. in Specialized Journalism. USC’s highly customized degree programs are tailored to the experienced journalist and gifted amateur. Learn more about how USC Annenberg is immersed in tomorrow.

Suleiman Abdullahi was recently an eyewitness to the birth of the world’s newest nation.

"When you're on our site, you're not only seeing students practicing journalism. You're also seeing a lot of really groundbreaking work." - Krista Kapralos

In early January, the 20-year-old Kenyan journalism student flew to Juba, Sudan, to cover the massive referendum responsible for the creation and upcoming independence of South Sudan. As Abdullahi wrote, he arrived in the prospective nation’s capital city with a travel visa, a press pass, a story budget, and a 48-hour window to interview, observe, and report upon “the history that was about to be made.”

By the end of his first day, he was under arrest.

Abdullahi was part of a two-man student reporting crew hired by UPIU, a student journalism project run by the United Press International news service. UPIU is an emerging player in the college media and journalism education arenas. Its website features a self-publishing platform for news stories and multimedia journalism projects posted by students around the globe.

More than a platform

The most standout aspect of UPIU: It does not just publish content by students; it provides classroom workshops, story editing, and one-on-one mentoring to help their pieces sing. The students who take advantage of its services undergo what UPIU senior mentor Krista Kapralos calls a “mini-internship experience.”

It currently partners with more than 30 schools in roughly a dozen countries, leading to a cluster of student-produced stories touching on things such as Kenyans and antibiotic resistance, Moroccans and Christianity, the Chinese and homosexuality, and Egyptians and a revolution. The UPIU motto: “Mentoring Student Journalists Worldwide.”

“We want to leverage UPI’s solid reputation to attract aspiring journalists and improve foreign coverage,” said UPIU Asia regional director Harumi Gondo. “I’ve not encountered another program that has such direct communication and relationships with journalism schools around the world.”

No contracts are signed. UPIU does not collect any revenue from the posted stories. Students retain ownership of their work and are free to submit elsewhere. In the meantime, their content is vetted by professionals and considered for pick-up by UPI. Since its creation in late 2008, more than 2,300 stories have been published on the site. More than 100 — roughly 4 percent of all submissions — have been approved for placement on UPI.com.

Extra Help in the Classroom

I can personally vouch for its potential. I have incorporated UPIU into multiple sections of my news reporting classes at the University of Tampa to mostly positive results. The process is five-fold: 1) an introductory video chat with each class hosted by veteran journalist Kapralos, who oversees UPIU’s initiatives in Africa, Europe, and the Americas; 2) an optional video session in which students pitch story ideas; 3) a critique from a UPIU mentor on subsequent story drafts students post to the site; 4) a video chat round-up with Kapralos commenting on the quality of submissions overall; and 5) revisions by the students based on the feedback from Kapralos and, of course, their professor.

Students’ involvement with UPIU ultimately helps underscore the lessons I am teaching them — if nothing else, the importance of a news hook, timeliness, editorial collaboration, and three-source minimums.

It also has served as the platform for award-winning work. In fall 2009, Michigan State University student Jeremy Blaney earned a Religion Newswriters Association honor for his reports on local Muslim issues that were published on UPIU and, soon after, UPI. The headline of one of his pieces, which touched on the intersection of Islam and technology was, “You’re a Muslim? There’s an App for That.”

“When you’re on our site, you’re not only seeing students practicing journalism,” Kapralos told a news-writing class during a recent video chat. “You’re also seeing a lot of really groundbreaking work. And you’re seeing it through a lens that you don’t always see through the New York Times or CNN.”

Lunch, Without the Education

One prime example involves peeling potatoes. Unbeknownst to many Westerners, a government program in India requires public schools to provide a hot lunch for all students. Since its roll-out roughly a decade ago, scattered stories from professional news media have been mainly glowing, focused on the positives of children eating at least one decent meal a day in a country where poverty and hunger are rampant.

It took a local student journalist — and five days of editing oversight by a UPIU mentor — to help present the truth. Shiv Sunny, a student at New Delhi’s National Islamic University, built upon his personal knowledge of the required lunches and close proximity to numerous schools to uncover the program’s underbelly. In some schools, the teachers are the individuals required to receive the food shipments and prepare the meals — forcing them to spend hours each day cooking, mixing, and peeling essentials like potatoes and carrots in place of teaching.

As Kapralos explained it, “The story our student found: Yeah, the students are getting lunch, but they’re not getting any education because their teachers are spending literally the entire day in the kitchen.” Another problem: Hungry students often attend school just for lunch, and then skip out on the learning.

Admittedly, some students treat UPIU similarly. They use the site to gain a web presence with panache and ignore the professional mentors’ editing feedback, leaving their articles’ factual inaccuracies and grammar slips in public view. The operation also still screams young and scrappy rather than streamlined, at times seemingly run solely on the hard work and sheer tenacity of Kapralos. And the site’s story template is somewhat restrictive — sporting the same look for every piece and an accompanying photo slot that is a bit tiny.

According to Kapralos, template changes, multimedia add-ons, and paid freelancing opportunities are in the works. The latest call, which is for student reports on Internet infrastructure, access, and control, offers $100 for selected stories.

The first major freelance initiative was the Sudan assignment, which spun into action quickly as hopes for the referendum became reality. UPI president Nicholas Chiaia was a strong advocate of hiring students as stringers for the seminal event.

“He really sees the value in student journalists and he is not one to turn them away simply because they have minimal professional experience,” said Kapralos. “He’s the one to say, ‘We need to utilize students, if there’s a way we can do it that equates to responsible reporting and provides quality work.’”

Kapralos contacted two student journalists in Kenya whose previous work impressed her: Abdi Latif Dahir and Abdullahi. She assigned Dahir to Nairobi, where he covered the referendum voting of Sudanese refugees. She asked Abdullahi to fly to the story’s geographic center, Juba.

Along with his “fixer” (a local guide), Abdullahi boldly charged into the international reporting gig. He describes competing for stories with “thousands of foreign correspondents, each one eager to thrust their cameras and microphones at every passing local.” At times, Abdullahi employed his “rudimentary Arabic” to interview residents who did not speak English.

Just before midnight on the day of the big vote, he went downtown to see if anyone had begun lining up. There, he said, an “extra cautious” security force detained him and demanded a curfew.

“You are welcome to do your work here and we appreciate you, but you must be indoors by midnight,” the police told him. “After midnight, we really cannot guarantee your safety and we don’t want your government breathing down on our necks.”

In Washington, D.C., Kapralos was holding her breath. She had been trading messages with Abdullahi non-stop. He had been turning in all his reports on time. Suddenly, he had gone quiet, and a story deadline had passed.

“As an editor, it’s one thing to have a story go missing in the melee of a major breaking news situation,” she recalled. “But when the breaking news story is in a region of the world where violence has been a way of life for decades, and when what you’ve lost isn’t a story, but a reporter, stakes are high.”

Fortunately, Abdullahi was released a half hour later, unharmed, and went back to work. He ultimately earned three UPI bylines, reporting on the guns, flags, billboards, long lines, traditional folk songs, and ink-stained fingers of voters that comprised the spectacle of the historic referendum.

And along the way — like his reporting partner Dahir — he experienced his own unforgettable journalistic coming-of-age story.

“Seeing tens of thousands of people line up under the scorching sun with such zeal is a scene that is hard to describe,” Abdullahi wrote soon after flying home. “When it’s all done and the seemingly inevitable decision of secession is made, we’ll be able to say that we were there when they became a nation.”

Dan Reimold is an assistant professor of journalism at the University of Tampa. He writes and presents frequently on the campus press and maintains the daily blog College Media Matters, affiliated with the Associated Collegiate Press. His first book on a major modern college media trend, Sex and the University: Celebrity, Controversy, and a Student Journalism Revolution, was published this past fall by Rutgers University Press.


Education content on MediaShift is sponsored by the USC Annenberg nine-month M.A. in Specialized Journalism. USC’s highly customized degree programs are tailored to the experienced journalist and gifted amateur. Learn more about how USC Annenberg is immersed in tomorrow.