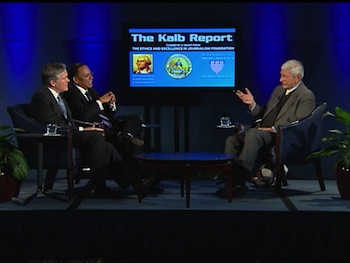 “All the News That’s Fit to Print” is both the slogan of the New York Times and the title of the most recent installment of the Kalb Report, a monthly media discussion put on by George Washington University in D.C. Given its title, the overflow audience at last night’s discussion between Marvin Kalb and Times executive editor Bill Keller and Washington bureau chief Dean Baquet might have expected to hear more about the paper’s long history in the printed word.

But in spite of the moderator’s repeated attempts to talk up the front page, the “wild web,” as Kalb described it, kept creeping in. Keller and Baquet explained how the Internet has — and will continue to — change America’s newspaper of record.

The reality is that the rise of the Internet and newspapers is the greatest thing that has hit us since sliced bread." - Dean Baquet

To begin with, Keller said its famous motto, which has been printed on the front page of every edition since October 25, 1896, is no longer entirely accurate.

“The slogan,” as he called it, “harkens back to a day when the aim of the newspaper was to be comprehensive.” Now it is simply “an aspiration, or a mindset.”

Keller pointed out that, for many years after it was founded on September 18, 1851, the Times would print items as seemingly mundane as the comings and goings of ships in New York Harbor. Information like that is now relegated to trade newsletters or specialist websites.

All of these publications are now to some extent competition for the Times. While Keller sees the Wall Street Journal as his primary competitor, he is also keeping his eye on websites that have a niche focus. Last night, he specifically mentioned both the politics-centric reporting at Politico and the opinion-driven coverage at the Daily Beast.

The race is “not just for the stories,” according to Keller. “The Huffington Post and places like that are competing with us for talent,” he said, alluding to the recent defections of a Times’ business editor and economic correspondent to the progressive news and aggregation site.

“They’re competing with us a lot in the field of innovation,” Keller added. “I don’t regard the Huffington Post as an extremely aggressive competitor in national reporting, but the way they do social media is pretty instructive.”

While the Times is taking user engagement cues from the Huffington Post, it is taking a page from the Financial Times when it comes to business models.

Like HuffPost, NYTimes.com attracts hundreds of millions of readers. Keller said the Times has made a “tidy sum” from advertisers trying to reach its 50 million unique visitors each month. But with a much larger news team — Keller put the current headcount somewhere between 1,100 and 1,500 — the Times’ digital ad revenues are not enough to offset losses from declining print ads and circulation, which has fallen to about a million subscribers per day.

To make up this difference, the Times is planning to end unlimited access to its website. Like the Financial Times, Keller said that “later this year” NYTimes.com will implement a metered pay wall. That would allow casual users to read articles on the site, but charge frequent visitors if they are not already subscribers to the print newspaper.

“People who use the New York Times website as their newspaper,” he said, “should pay a little something for it.”

Keller’s statement seems simple enough, but it is a profound departure from the way newspaper companies have viewed their websites in the recent past. And, because of the Times’ size and stature in the American media landscape, its change of heart will likely have a profound effect on the web strategies of other newspapers around the country.

Kalb’s pointed questioning seemed to suggest the view that the Times’ decision to collaborate with WikiLeaks has degraded the definition of, and standards for, journalism organizations. Keller and Baquet, the DC bureau chief, both pushed back hard against this notion.

“The New York Times became the enabler of WikiLeaks by publishing a lot of stories based on the cables WikiLeaks provided. And when I use the word ‘enabler,’” Kalb emphasized, “I’m not using that in a positive way.”

WikilLeaks is not a journalism organization, according to Keller. “They are an advocacy group,” he said. “You can call them a vigilante group,” he added.

And, Keller pointed out, they didn’t need the support of the Times to throw American diplomacy into disarray. “They would have published it to a website available to anybody who wanted to look at it and the information would have circulated through the blogosphere in a day.”

Baquet was more forceful in his defense of the controversial collaboration. “There is no question that WikiLeaks added tremendously to the understanding” of the Afghanistan and Iraq wars, he said.

Baquet said questions about if the Times was “behaving in an arrogant way, flaunting its ability to publish this stuff, enabling WikiLeaks,” missed the point.

“To me the most unimaginable and arrogant thing the New York Times could have done,” Baquet said, “was to have this stuff, look at it and say, ‘This is interesting. Let’s have an ethical debate. Let’s put it back in the computer. And let’s go have lunch.’”

Regardless of their objections with the source — and Keller, as he’s done before, again expressed his distaste for WikiLeaks and Julian Assange by association — the Times felt obligated to share information it had received.

The web has not only upended the Times’ motto and business model and forced it into unusual sourcing arrangements, it has also enabled new editorial experiments and collaborations.

“It’s a particular malady of the journalist that we jump right to the negative,” Baquet said, “but the reality is that the rise of the Internet and newspapers is the greatest thing that has hit us since sliced bread.”

For those outlets that can still afford to do it, the web has opened new opportunities in international reporting. Keller was eager to talk about the paper’s thorough reporting of the ongoing protests in Egypt.

Keller also highlighted an innovative series from 2008, Kremlin Rules. The stories were translated into Russian and posted on one of the country’s most popular blogs to elicit comments, which were then translated back into English before each article was published in the Times.

“The Russian readership enriched our stories about Russia,” Keller explained.

In addition to collaborations with Russian bloggers, the Times has worked with NYU and non-profit newsrooms like ProPublica. During the question and answer session after the discussion, I asked Keller if readers and media watchers should expect more projects and partnerships from the Times in the future.

“Yeah, I think so,” he said. “These days we’re in an era of experimentation and — as long as we can be persuaded that we can undertake an experiment without putting the credibility of the paper at risk — we’re game to try it.”

Corbin Hiar is the DC-based associate editor at MediaShift and climate blogger for UN Dispatch and the Huffington Post. He is a regular contributor to More Intelligent Life, an online arts and culture publication of the Economist Group, and has also written about environmental issues on Economist.com and the website of The New Republic. Before Corbin moved to the Capital to join the Ben Bagdikian Fellowship Program at Mother Jones, he worked a web internship at The Nation in New York City. Follow him on Twitter @CorbinHiar.