How Technology, Social Media Is Making Life Hard for Dictators 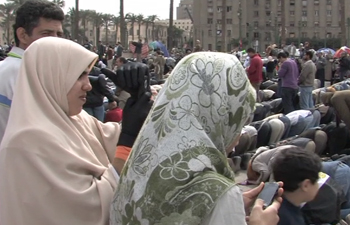 Women in Cairo record the protests in Tahrir Square

This is the third of our on-the-ground reports from Cairo, Egypt, from Jaron Gilinsky. In this video report, Jaron considers the effects of social media on the Egyptian revolution.

I wondered how Egyptian president Hosni Mubarak eventually knew about the hundreds of thousands of people in the streets calling for his resignation. Surely, he had many agents on the streets providing him information, but how did he ever see the pictures? Egyptian State television was showing children’s programming and soap operas while molotov cocktails were being hurled at government buildings outside its studios. Perhaps, just once, he took a quick sneak-peak at the stations run by those “saboteurs” at Al Jazeera or CNN? Did he, at the ripe old age of 82, ever log on to YouTube or Bamboozer to see one of the thousands of videos posted from Tahrir Square?

Simply by virtue of connecting to the outside world, Egypt's media landscape transformed along with it."

If he did, then Mr. Mubarak must have been shocked to see the gluttonous orgy of media being produced from his country. While Egypt lay dormant for 30 years, the media had metamorphosized from a larvae to a butterfly. It was no longer a one-dimensional, black-and-white tool to brainwash the populace, but a colorful cornucopia of apps, gadgets, and platforms, resulting in infinite bits of information. Simply by virtue of connecting to the outside world, Egypt’s media landscape transformed along with it, seemingly overnight. Suddenly, the tables had turned. The more Mubarak tried to tighten the noose, the more bloggers he created.

For all the other despots out there who still think the media begins and ends with Channel 1, your Revolution will soon be shown on an iPhone near you. Qaddhafi is now finding this out in Libya. After his awkward appearance on Libyan state TV showing that he is still in Tripoli, there are now much higher quality productions being made on YouTube depicting his losing battle. For Mubarak and his ilk, it has become awfully difficult to completely suppress media. Even the most repressive regime in the world, North Korea, now allows limited cell phone use, but still blocks all Internet access. While the North Korea model may be the only way for these tyrants to hold onto power, I’m afraid it may be too late for most regimes who have already given their people a taste of cyber-freedom. The cat’s already out of the bag. People who have searched on Google and have poked on Facebook aren’t going to be satisfied with state TV any longer.

> One Journalist’s Survival Guide to the Egyptian Revolution

Jaron Gilinsky is a journalist and documentary filmmaker based in Jerusalem. As a freelance video correspondent for Time, the New York Times, and Current TV, he has produced and directed scores of documentaries on a range of international topics. Jaron regularly posts his videos and articles on his personal blog.