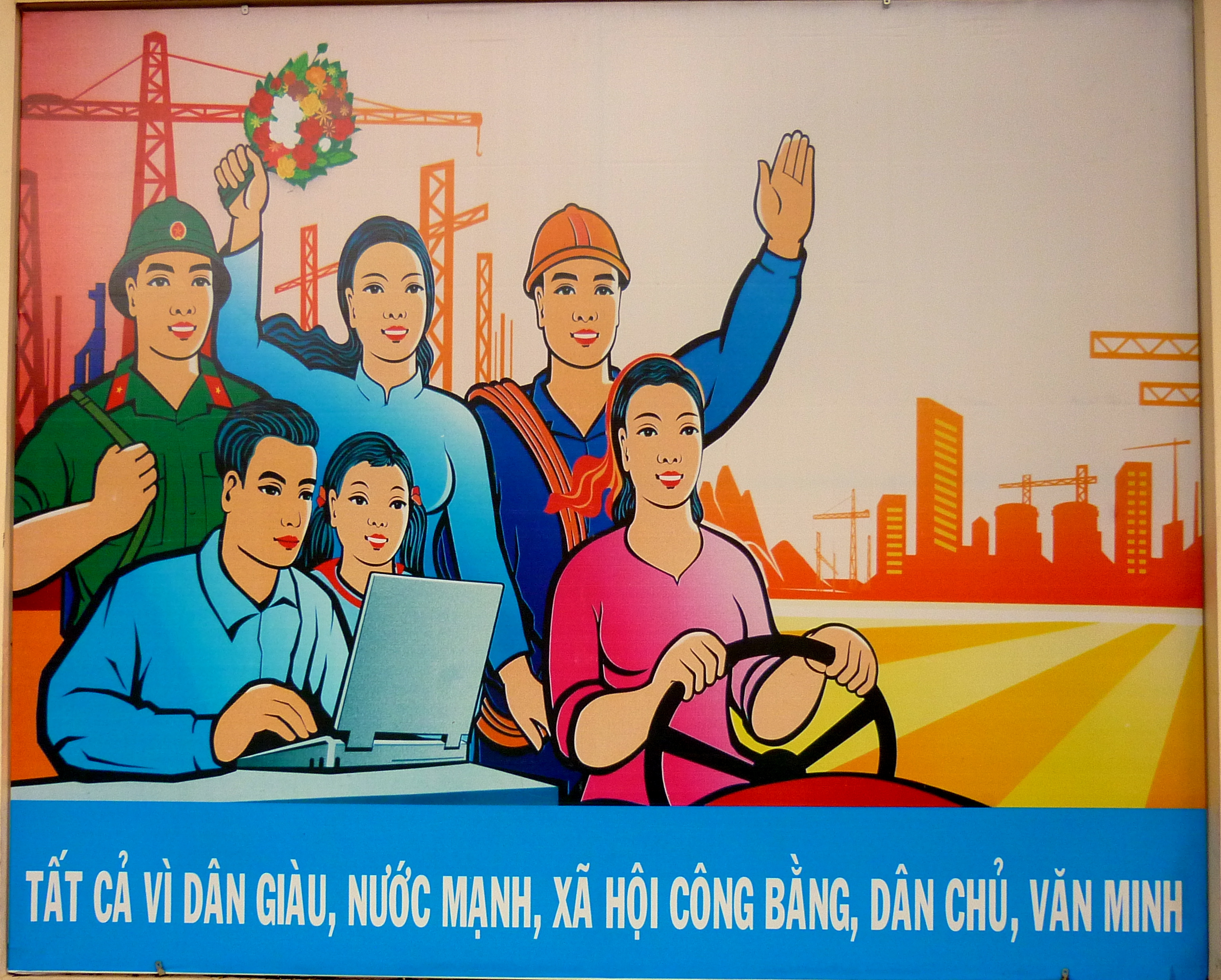 Last October, I had the opportunity to spend almost three weeks traveling through Vietnam, from Ha Long Bay to the Mekong Delta. The breakfast rooms I dined in were always stocked with copies of the government-run English-language daily, the Viet Nam News — and on its sunny front page, the news is always good.

One typical issue heralded plans from the Central Committee of the Communist Party for “improving the competitiveness of enterprises.”

We have more freedom in our online edition, and that's where our readership is going. We just need more skills to produce the stories." - Vietnamese newspaper editor

“Production forces must be developed to a high-tech level while improving the production relations and socialist-oriented market institutions,” it said.

Digital media occupy a critical position in the party’s “high-tech” plans. The government has been building out the country’s media infrastructure at a rapid pace. Internet subscriptions leapt from 200,000 in 2000 to 8 million in 2010. By 2020, they are projected to rise to more than 17 million, and the Ministry of Communications hopes that the country will break into the world’s top 60 countries for web penetration.

But the same issue of the Viet Nam News sounded a darker note on media a few pages later, warning that young Vietnamese were using “creative measures” to dodge a new law that “aims to limit online gaming.” According to the article, Vietnamese teens favored violent games such as Red Alert, Left4Dead, and Call of Duty: Black Ops. (One can imagine why Vietnam’s elders might not favor a first-person shooter game that sends virtual CIA agents to targets in Cold War theaters including Vietnam…)

“The curfew was issued following complaints about the negative effects online games were having on youth, including addiction and rising school violence,” the story read. On the following page a survey reported, “Social networking is fine, but do not forget the downside.”

I had long been aware of government crackdowns on the country’s online media, but when talking to Vietnamese I learned of fine points missing from the general debate. Like China, its giant neighbor to the north, Vietnam has tried to play both sides of the fence on the questions of media development and censorship. As Simon Roughneen’s post for MediaShift pointed out last month, the Vietnamese government has invested considerable time and resources in restricting the impact of Facebook.

On the Mekong Delta with cell phones in their pockets

At the same time, it’s a mistake to imagine Vietnam as a living under total media control. Instead, a combination of rapid technological and economic advances have opened vast new avenues of information for the new middle-class — even as the government pursues its cat-and-mouse game with online dissent.

After the U.S.-Vietnam War ended in 1975, the country went through a period of devastating famine and hardship. Vast expanses of Vietnam’s territory were blighted by lethal defoliants, military contamination and landmines, and new victims of this bitter legacy still emerge every day. But the economic disaster proved more tractable; within a few decades it gave way to a phase of astonishingly rapid growth.

The Vietnamese Communist Party may have maintained a tight grip on local news outlets, but at the same time it laid the groundwork for an educated consumer society with a hunger for information. Government projects included a national literacy campaign that boosted adult literacy from under 75 percent to over 95 percent within 20 years.

Many media outlets are booming — but this category does not include the state-run, propaganda-based newspapers. In a forthcoming study from the World Association of Newspapers, Catherine McKinley reports that these publications are losing circulation and advertising revenues at the same time they are experiencing increasing pressure to become more independent of government subsidies.

Cable television, on the other hand, is growing rapidly, especially in the cities. I spoke about it with Ly, a Hanoi intellectual from a Communist Party family whose name has been changed to protect him from government retaliation.

“What do we watch? Everything! CNN International, the BBC, the Discovery Channel — you name it,” he said.

Ly’s point shed some light on the great Vietnamese Facebook controversy. During my trip to a half-a-dozen Vietnamese cities, I was able to pull up Facebook in some places (including noodle shops with WiFi), but not in others. When I checked online comments, I saw that the blocked materials included Facebook groups organized by Vietnamese exiles in the U.S. On the other hand, even from my noodle shop outposts, I was able to access an in-country Facebook group that promoted environmental protection as a government-approved youth project.

Unauthorized environmentalists have met a different response. As Roughneen pointed out on MediaShift, the government took harsh measures against two Vietnamese blogs, Blogosin and Bauxite Vietnam, that criticized its plans for a China-led bauxite-mining project in the Central Highlands. (China, which occupied Vietnam many times over the past millennium, appears to be far more unpopular among today’s Vietnamese than the U.S.) Investigations of the incident have contributed more details on the full scope of the attack.

According to the Committee to Protect Journalists’s Shawn Crispin, “Vietnam’s government actively promotes Internet usage to modernize the economy, but at the same time cracks down on bloggers who post views critical of the government and its policies.”

Danny O’Brien, CPJ’s Internet advocacy coordinator, told me that the government launched “a directed hacking attack on Blogosin, which crashed the site and led to its creator announcing his retirement from reporting.”

According to O’Brien, “The sophistication of surveillance and attacks on Vietnamese online media already exceed anywhere else in the world, including China. In early 2010, websites covering the bauxite issue were taken offline by denial-of-service attacks (DDoS).”

The thousands of computers used in this attack were controlled by a large domestic “botnet” of computers infected by a specific kind of malware. Investigators at Google and McAfee discovered the source: A Trojan concealed in the software downloaded by many Vietnamese to allow them to enter native text accents when using Windows computers.”

From the Vietnamese news consumer’s perspective, the danger lies less in accessing proscribed sites than in the later repercussions. According to Ly, the government monitors both home computers and accounts used in public spaces to see who is accessing the critical sites over time — and then takes action.

“They follow your usage over a period of time, and then the police show up at the door,” he said.

We can’t underestimate the suffering — to say nothing of the nuisance — inflicted by Vietnam’s cyber-cop crackdowns. But at the same time, it appears they’re fighting a losing battle. Vietnam’s media audience is moving online rapidly, partly because they are constantly learning new techniques for outmaneuvering the authorities — and partly because the Communist Party’s traditional news media have failed to hold on to their audience and advertising base.

Furthermore, technology is accelerating change: Vietnamese cell phone penetration already stands at over 111 million (in a country of under 90 million), and news will be even harder to control as it continues to migrate on to mobile platforms.

As one Vietnamese newspaper editor put it: “Things are changing. We have more freedom in our online edition, and that’s where our readership is going. We just need more skills to produce the stories.”