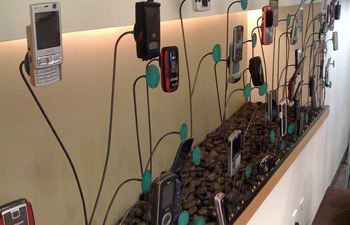 2010 was an important year for mobile, especially in media, where the announcement of the iPad and other tablets, along with new smartphones, made mobile and tablet apps especially intriguing to publishers. This year promises greater growth and new opportunities for content producers. Here are some of the top trends to keep an eye on as 2011 unfolds.

While the iPhone helped create a tipping point for mainstream smartphone adoption, Android activations are up to 300,000 per day, according to Google. Seeing this, some mobile developers, tired of the hassle of Apple’s App Store approval process, are focusing their talents on creating apps for Android. If growth continues at this pace, it’s possible that devices running Android will eclipse iOS in mobile popularity.

The speed of 4G will make watching live steaming video on mobile a much more common activity."

Services such as Foursquare, Gowalla and Facebook Places receive a lot of attention among tech aficionados, but have yet to become mainstream. While many people are now familiar with the concept of a check-in, a study by Forrester Research found that only 4 percent of people in the U.S. have done so, and only 1 percent do so weekly.

Retailers are keen to capitalize on check-ins, offering deals to customers and rewards for loyalty. As more businesses hop on the bandwagon and smartphone apotion continues to grow, the number of people willing to share their location will increase.

Apple’s iPad popularized the tablet in 2010. It remains the market leader, but competitors such as Motorola and RIM are brewing up their own models, and Samsung’s Galaxy is already in the international market.

Motorola’s newly announced tablet, the Droid Xoom will run Android’s Honeycomb OS and offer connectivity through Verizon. RIM’s PlayBook will support Flash and tethering via BlackBerrys with any carrier, two features that iPad critics might appreciate.

On the hardware side, touch screens are getting ready to start touching back. Some Droids and other phones have implemented haptics, or touch feedback, which can respond to a key touch with vibration, for example. Last summer, Apple filed a patent titled “Multi Touch with Multi Haptics” that could make specific parts of the screen provide feedback when touched.

Even more impressive is the TeslaTouch technology being developed by Disney Research. In the near future, the sense of touch will be used to communicate the size of a file being dragged, the texture of a visual graphic, and the moment when an object on the screen snaps neatly onto a grid.

Some carriers began deploying 4G networks last year and continue to expand their coverage areas. The speed of 4G will make watching live steaming video on mobile a much more common activity. Video eats up a lot of bandwidth, so expect phone plan pricing structures to continue shifting away from paying for minutes to paying for data usage.

The dream of being able to find free WiFi anywhere is still a ways off, but 2010 marked the first time the U.S. saw more free WiFi hotspots than paid ones. Carriers with heavily burdened cellular networks are diving into WiFi with the hope of easing their mobile data loads. AT&T is expanding its WiFi hotzone program, especially in New York and San Francisco, where its network is under the biggest amount of stress.

Up until now, smartphone users haven’t had much to worry about in terms of viruses. Smartphones are mini-computers, however, and malicious hackers are beginning to target them. McAfee put mobile on its forecast as one of this year’s top security threats.

Even feature phones could be attacked. Researchers recently demonstrated how a single text message could take down an entire network by utilizing phones’ vulnerabilities.

Several popular mobile apps, including Pandora, MySpace and Paper Toss, were caught secretly passing personal information including age, gender and location, to advertisers without users’ consent. The Mobile Marketing Association took notice and announced that it will work on a new set of guidelines to protect consumers’ privacy. Most people consider their devices to be very personal, and growing awareness of potential privacy breaches could help keep developers and marketers honest. Regulators’ efforts in other areas, like the “Do Not Track” database, could be extended to mobile as well.

Berg Insight calculated that 2 percent of mobile network traffic last year was between machines, including devices like digital picture frames, e-book readers and smart energy meters. Automotive brands including Ford and BMW have launched apps that let you send driving directions to your car from your phone before a trip, and turn your car’s radio into a player for your favorite web radio service.

Savvy shoppers are using smartphones to save money. Barcode scanning apps like RedLaser search the web for a product’s best price, enabling consumers in a store to buy a product online for less before leaving. At this point most people have yet to make a large purchase via their handset, but as mobile devices become more like — and are perceived more like — computers, mobile shopping will be on the rise.

Matylda Czarnecka is a mobile, green tech and tea aficionado in New York City. She is an alumna of NYU’s Studio 20 graduate program, which focuses on innovation in digital journalism. She has written about GreenTech for TechCrunch, oversaw mobile and mapping as product manager at the Bakersfield Californian, and helped shape the Durango Herald’s online strategy. Matylda is the founder and CEO of “Love Your Layover”;http://loveyourlayover.com/, a web- and mobile-based resource for travelers who’d like to escape the airport during lengthy layovers.