How Should Public Media Respond to Efforts to Defund It? 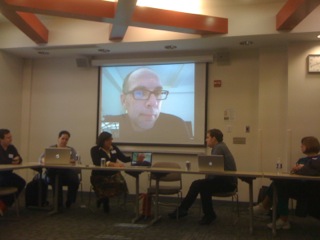 Jay Rosen joins a group at the Public Media Camp to discuss how public broadcasters might best respond to efforts by the House to defund CPB, and other ideological attacks. (Photo by Julia Shrenkler)

The Public Media 2.0 series on MediaShift is sponsored by American University’s Center for Social Media (CSM) through a grant from the Ford Foundation. Learn more about CSM’s research on emerging public media trends and standards at futureofpublicmedia.net.

“Here is what I still don’t get,” wrote NYU journalism professor Jay Rosen in response to my November 18 article, “how can public media develop a strategy or simply a coherent response to the culture war in which it is entangled if it cannot admit to itself or reason publicly with the fact that only one side in the culture war wants to destroy it… and the other one doesn’t? What is public media’s culture war strategy? Not to have one?”

Rosen’s comment prompted a few thoughtful answers, first on MediaShift in the comments, and then at an impromptu session at Sunday’s Public Media Camp.

“I don’t think it’s the place of public media to ‘take sides in the culture war,” wrote MediaShift executive editor Mark Glaser. “I think it’s public media’s role to provide a forum for different opinions on the culture war, and give space for diverse opinions on it. That doesn’t mean that individuals who are a part of public media can’t give their opinions, and they should. The ‘view from nowhere’ only goes so far. But should NPR, PBS, etc try to out-dittohead the dittoheads? That doesn’t make sense either.” Instead, he suggested, the already-existing fan base for public broadcasting brands should be rallied. “There are already millions of people who support public media financially through donations, so maybe it takes a grassroots effort by those people to counter all the attacks.”

Station manager Anthony Hunt suggested that a workable strategy might be to “develop allies that have much better armor than we do, or certainly don’t want to see us change our attempts to remain value neutral because this fight won’t be going away anytime soon.” He suggests that public-media makers need help because they’re under-resourced, and “bring a tote-bag to a knife fight” — a phrase that echoed a quip by Jon Stewart in response to conservative comments about the Juan Williams flap.

Peter Corbett of iStrategy Labs, who helped to organize the PubCamp, suggested going on the offensive by developing “a 50 state strategy that includes gathering your troops (biggest fans) and preparing to mobilize them for war,” and, somewhat jokingly, “taking a page out of cereal/fast food marketers’ playbooks: go after their kids early and often, and then turn them on their parents.”

Jauvan Moradi, who works at NPR Digital Media, suggested that rather than a “culture war” strategy, what’s needed is a better business strategy, to deal with the possibilities of reduced funding.

“There are certainly tensions today,” he wrote, “progressive vs. conservative, public values vs. private interest, urban vs. rural, new economy vs. old — arguably reaching a pinnacle not seen in prior decades. But public media has never been a monoculture of us vs. them. Every local market has a different flavor that reflects the interests and diversity of its audience. The national content producers strive for a sort of neutrality that not only reflects our journalistic sensibilities but also allows for a sort of universality that works with the local flavors in hundreds of towns and cities. It’s not our place to take a side amidst cultural tension.”

Rosen disagreed. “I think culture war is precisely the right word for that is happening, and for the dynamic I am pointing out. The attempt to de-fund NPR — an actual vote in the House of Representatives — because of what happened with Juan Williams has no other logic than culture war logic…Now if the people in public media come to the conclusion: ‘There’s nothing we can do; it’s up to people outside the system to make our case. We’re not a participant in these so-called culture wars. We’re just the victim, the target….’ I can understand that, too, but they should at least arrive at that conclusion after thinking it through.”

In order to think it through some more, Rosen joined Public Media Camp attendees via Skype for a discussion of strategies and obstacles. Here are a few highlights from the discussion:

Rosen warned that advocates for public broadcasting need to appeal not just to facts, but to pay heed to frames. There’s a tendency, he noted, to think “we’re not communicating clearly — sometimes that’s true, but in a culture war, there’s ‘systematically distorted communication.’ It’s not a messaging problem, it’s that there are actors who profit from this distortion. It’s important to know when you’re in this situation — the goal is to engage those who aren’t engaged in systematically distorted communication and discredit and shame those who distort.”

The Public Media 2.0 series on MediaShift is sponsored by American University’s Center for Social Media (CSM) through a grant from the Ford Foundation. Learn more about CSM’s research on emerging public media trends and standards at futureofpublicmedia.net.