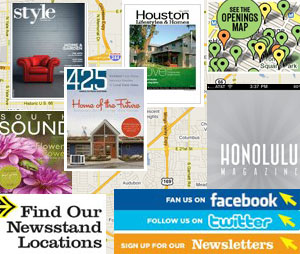 Local and regional magazines are finding ways to provide timely, interesting web content that can draw audiences between print issues

Even back in 1888, King Kalakaua of Hawaii recognized the power of city and regional magazines. His royal charter led to the creation of the magazine Paradise of the Pacific, whose goal was to display the civilization of the islands and to draw tourists and business.

Kalakaua would be amazed by the transformation of the publication now called Honolulu Magazine. Today, the king could follow the magazine on Twitter, watch its web videos, receive email newsletters and read it in print or multiple digital formats.

Though not every city or regional magazine has such a long history, many of them are today drawing on their established credibility and brand recognition to support new digital experiments. Many have crafted sophisticated websites, creative mobile apps, and innovative advertising strategies. These experiments may help the magazines remain definitive resources for information about their places, even as they are challenged by new, online local media outlets.

Like other magazines, city and regional publications have had to find ways to provide timely, interesting web content that can draw audiences between print issues. One method has been to create locally oriented blogs on their sites, sometimes maintained by existing editorial staff and sometimes by paid part- or full-time bloggers. The magazines have also linked to external local blogs to curate quality content.

Honolulu Magazine has an online real estate column updated almost every weekday, in addition to new online posts on other topics and web-exclusive content.

“A monthly magazine has traditionally lived in its own time zone, a month or two removed from what’s going on in our community,” says A. Kam Napier, the magazine’s editor. “It’s fun to react to news and what’s going on around town.”

Opt-in email newsletters about dining, shopping and local events have been valuable for local magazines. Many of the local magazines owned by Today Media have associated e-newsletters, including Delaware Today and Westchester Magazine.

Chris Calloway, digital media project manager for Today, said both advertisers and readers like the e-newsletters. In all the digital formats the magazine uses, Calloway said, the ability to analyze readers’ interests has helped the magazine and its advertisers.

“It’s a very important tool to find out what interests the consumers,” he said. “We’re sifting through the data to find ways to organically make changes.”

Readers Near and Far

For city and regional magazines, there are unique advantages to offering digital editions and mobile apps.

Thanks to the immediate delivery and easy accessibility of digital editions, local magazines no longer have to rely solely on distributing print editions nearby. Apps for the iPhone, iPad and Android are increasingly making these magazines available wherever interested readers might be — even far away.

“I’ve noticed an increase in international sales,” says Calloway of Today Media. “The digital edition has reached a whole new audience overseas, including people who used to live in the area and want to learn about it.”

Local audiences also enjoy the benefits of mobile apps. New York Magazine has a truly nationwide audience, but it’s also providing the local audience a variety of focused apps. It bought the website MenuPages two years ago and now offers an iPhone app that provides menus and reader reviews for 30,000 restaurants in eight market areas. There’s also an Android app for reading the magazine’s blogs.

“There are some other kinds of category-specific mobile apps for the iPad, iPhone, and Android that we’re working on,” said Michael Silberman, general manager for digital media at the magazine’s parent company New York Media. These will probably include a fashion app and an app for Vulture, the magazine’s highly successful entertainment and culture blog. Eventually, Silberman hopes to develop a variety of apps to help users “navigate New York.”

New York has also found new revenue opportunities through its mobile and web presences. For example, in the MenuPages app and in the magazine website’s restaurant listings, users can click through to make a restaurant reservation using the OpenTable service. Some restaurants also permit online ordering through SeamlessWeb.

“We have some little experiments going with click-to-buy theater tickets or movie tickets, or stuff from Amazon or iTunes,” Silberman said. “The stuff that’s really firmly in our wheelhouse like restaurant reservations and online ordering — that’s pretty interesting from a revenue point of view.”

Other types of retail connections have not yet been as profitable. “People don’t come to a news site to download music or buy DVDs or books. They may read about it on our site, but they’re unlikely to do it there,” he said.

New York magazine has also worked with Foursquare, the popular location-based social app, to offer restaurant, bar and shopping information and deals to its followers on that site.

“We’re still one of the top 15 media brands on Foursquare as far as the number of followers, and we update that every week with new tips,” Silberman said. This type of location-based activity seems like a promising growth area for other local magazines as well, offering opportunities for brand development, advertising and coupons.

The Challenge of Being Local

One of the challenges for city and regional magazines — those much smaller than New York — is that they typically don’t draw enough of an online audience for advertisers to be interested in making online buys.

“We have a real hard time in our meetings bringing in any national expert on anything electronic. It doesn’t translate,” said Jim Dowden, executive director of the City and Regional Magazine Association. “You can’t get millions of hits in Des Moines when you’re writing about Des Moines. You’re not going to generate money from hits on a website about Des Moines if what you’re relying on is pennies per hit.”

A new enterprise called the Community Magazine Network, launching later this month, is trying to unify these smaller publishers to help them generate additional ad revenue and develop their online offerings. Brian Ostrovsky, CMN’s founder and CEO, compares his company to a national television network that provides assistance with ad sales, technology and best practices, with the goal of getting smaller publishers — especially those in suburban and rural areas — into the digital game.

“Community magazines have struggled online because they’re simply not staffed to have fresh content, and to provide the kinds of web content people expect for a compelling experience,” said Ostrovsky.

CMN aims to build upon participating magazines’ community relationships and existing content by integrating curated and social content online, while also helping construct print and online advertising deals with regional and national advertisers who might not otherwise be interested in smaller publications.

City and regional magazines, no matter the size, are doing fairly well in maintaining their print circulation, said Dowden, because there are few quality local media left in many areas — especially as newspapers downsize and lose local content. However, local magazines have to diversify their revenue sources and begin moving into digital while maintaining the integrity of their existing product.

With all of these new opportunities, publishers will have to get used to making money not just from print, but also to “getting money back in 10 different pots, instead of just the Internet or just the website,” according to Dowden.

Wherever the money comes from, city and regional magazines’ greatest asset appears to be their brand recognition and editorial integrity. Though it might seem that sites that offer user-generated, local restaurant and shopping information, such as Yelp, might challenge these publications, the magazines I talked to unanimously argued that their recognized credibility on such topics will sustain readers’ loyalty. Sites like Yelp are also less useful in smaller communities.

“Where we stand apart has been in offering expertise, analysis, historical perspective, and editing,” said Napier of Honolulu Magazine. “We narrow down their options to things we know they’d like because we know our audience. We focus on trying to bring that expertise.”

For example, the magazines emphasize that they use critics who visit restaurants repeatedly and then write quality reviews, overriding the widely varying quality and tastes of users at crowdsourced websites.

The magazines are, however, interested in integrating user-generated content with their sites. New York uses reader reviews in its restaurant section of its website and on MenuPages. Calloway of Today Media said, “These could be ways to engage with the consumer about the types of restaurants they like to go to. We can do polls of our readers about the best places to eat and shop and include those on the Today websites.”

Though the city and regional magazines’ formats may change, their continuing goal is to engage area readers in unique ways that other local media can’t offer.

“Magazines are uniquely positioned to make local lifestyle content compelling and relevant,” said Ostrovsky. “These magazines have established relationships. They are a part of the community.”

The experiments in new ways of developing, delivering, and selling advertisers on the power of that content are just beginning.