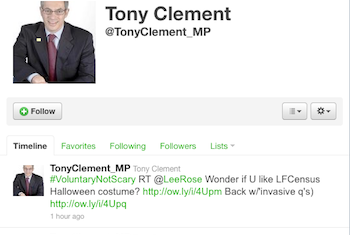 Tony Clement is the Canadian minister of industry, and a unique political tweeter
Clement's quirky tweeting stands out, as does the fact that his voice on Twitter is so similar to how he communicates in real life."
Click here to read the entire series
ADVERTISEMENT

Tony Clement, the federal minister of industry in the current Conservative Canadian government, was home having dinner with his family one Saturday night in July when a woman began banging on their door. She frantically asked for help, saying her friend was drowning in the nearby river.

Clement, his wife and father-in-law ran down to the water. He and two neighbors jumped in, and the group eventually managed to pull the woman to safety. Paramedics arrived and in the end she survived.

Later that day, Clement did what now comes naturally to him: he tweeted the entire story, beginning with this message:

True story & happy ending: we were having dinner when a young woman knocked on our door, hysterical. Her friend was drowning in the river…less than a minute ago via Twitterrific

Clement’s tweeting brought the media calling, and soon the entire country knew that he, his wife and others had helped save a drowning woman.

“The reason that I used Twitter to communicate the story is to remind people about basic summer water safety,” Clement later told the Canadian Broadcasting Corporation, “because I think that there’s something like 200 drowning deaths in our lakes and rivers across the country every year. Every single one of those is preventable.”

Clement may not have the most followers of any Canadian politician but he is the most quirky, entertaining and interactive elected tweeter in the country. The fact that he’s also a prominent minister in the federal government just makes tweets like these more notable:

Mmm. Waffles!less than a minute ago via Twitterrific

I enjoyed the choc chip cookies my daughter left for me tonight. At least…I thought they were meant for me.licks lipsless than a minute ago via Twitterrific

The chap sitting beside me on my Bathurst flight has a lge tattoo on forearm of a smiling skull w a dagger thru it. Meaning??less than a minute ago via Twitterrific

Clement has also shown a willingness to poke fun at his well-publicized river rescue:

I regret to inform you that nowhere in my travels today will I be saving any Chilean miners.less than a minute ago via Twitterrific

Clement tweets frequently about music, sports, food and, of course, his official duties. It’s an eclectic mix (see the collection of some of his recent tweets at the bottom of this article). For example, one day, apropos of nothing, he offered a lyric from “The Rocky Horror Picture Show”:

In the velvet darkness, of the blackest night, burning bright, there’s a guiding star. No matter what, or who, who you are.less than a minute ago via Twitterrific

I wanted to interview Clement about his approach to Twitter, but only got as far as his press secretary. She said Clement doesn’t do interviews about Twitter.

“He does believe that it’s more a personal thing — it’s a ‘Tony Clement the person’ kind of thing,’” she told me. “His policy is not to do interviews on Twitter.”

She then recommended I try tweeting him for an interview, which resulted in this exchange:

“He’s never done an interview just about Twitter,” his press rep told me. “The only place he’s ever answered questions about it is at the press gallery in scrums because he will tweet something silly and [the press] will yell out, ‘Hey what’s your favorite Johnny Cash song?’”

Though Clement didn’t answer my questions about his Twitter habit, he did recently tweet about why he tweets:

At dinner last night I was defending my use of Twitter as a way to engage.Then 2 people came by my table to say they follow me. Nuff said!less than a minute ago via Twitterrific

That inspired this reply from a follower and a reply to her from Clement:

Do u think staff comes up w this?? It’s gold! RT @Kristaloohoo Do you actually twitter? Or do you have staff that twitter for you?less than a minute ago via Twitterrific

In His Own Voice

The reality is that most politicians’ Twitter accounts are still operated by staffers, or are strictly focused on distributing official information, such as press releases. Clement’s quirky tweeting stands out, as does the fact that his voice on Twitter is so similar to how he communicates in real life.

“In person, Minister Clement can have an odd sense of humor and is reasonably popular among reporters because he can be self-deprecating at times,” said David Akin, the national bureau chief of Canada’s Sun Media, and a popular tweeter. “He’s been able to let this aspect of his personality come through in Twitter’s constrained format. So, in addition to Tweeting about the sorts of things you might expect politicians to tweets (policy announcements, digs at opponents, etc.), there are lots of tweets about his love of pop music, pop culture — and about some of the more mundane activities of any politician when they go about their riding activities.”

Clement also stands out partly because of his willingness to engage on Twitter about matters of policy. His government’s announcement that it will scrap the country’s long-form census resulted in significant debate and outcry. Clement has been front and center as the government’s defender of the decision, and he’s taken on that role on Twitter as well.

“Two other ministers make good use of Twitter — Jason Kenney (@MinJK) and James Moore (@mpjamesmoore) — but neither engage with followers the way Clement does,” Akin said. “Clement was the lead minister on the unpopular long-form census decision earlier this year and did as much as could to defend that decision from specific criticisms originating on Twitter.”

It seems to be paying off for Clement. Trevor May runs poliTwitter, a website that tracks and rates the Twitter usage of Canadian politicians, the political press and politics-related online chatter. As of this writing, Clement has the second-most followers of any member of parliament, and is ranked in the top three in the “Top Federal MP Tweeters” and “Top @replied Tweeters” categories.

“Tony Clement’s Twitter is definitely known for being a bit amusing and personal,” May said. “Which might seem surprising to some, seeing a Conservative minister cracking jokes or being sarcastic.”

In terms of what most Canadian MPs use Twitter for, May said, “Many are just tweeting mini press releases and don’t interact with others.”

Have a look below too see some of Clement’s recent, notable tweets and what people say to him on Twitter:

Craig Silverman is an award-winning journalist and author, and the managing editor of MediaShift and Idea Lab. He is founder and editor of Regret the Error, the author of Regret the Error: How Media Mistakes Pollute the Press and Imperil Free Speech, and a columnist for Columbia Journalism Review and BusinessJournalism.org and the Toronto Star. He serves as digital journalism director of OpenFile, a collaborative local news site for Canada. Follow him on Twitter at @CraigSilverman.