How Climate Activists Are Warming to Social Media 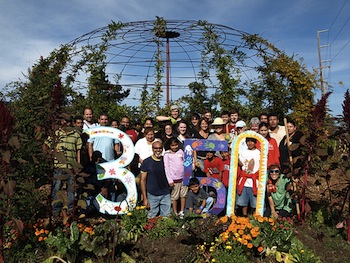 350.org is part of a new generation of new media-savvy environmental groups. Photo by 350.org via Flickr

American environmentalists recently suffered a pair of devastating defeats in their decades-long effort to halt global warming. Progress stalled on domestic legislation to cap greenhouse gas emissions prior to a key UN summit in Copenhagen. Lack of leadership from America, the world’s second largest climate polluter, made it impossible to produce and binding international agreement at the conference. Then, a few months later, the U.S. climate bill died in the Senate.

Their diplomatic and legislative maneuvers having fallen short, U.S. climate campaigners are hoping a renewed focus on activism and grassroots organizing can provide the push needed to produce carbon emission controls. As a result, the Internet and digital media are playing a growing role in efforts of progressive organizations ranging from new climate activists like 350.org to longtime environmental agitators such as Greenpeace.

If you get everyone to do the same thing at once online it's like a wave that gets a lot of attention." - Chris Eaton

By using the same name and web address, 350.org announced to the world in 2008 that it was a new kind of environmental advocacy organization. In choosing the odd name, the founders of 350.org wanted to communicate that their group was a science-based, single issue organization. The number comes from research, which shows that 350 parts per million of carbon dioxide (CO2) is the most the atmosphere can safely absorb without triggering catastrophic climate change.

The group emerged after author Bill McKibben and a group of recent Middlebury College graduates organized the 2007 Step It Up campaign. They collaborated with existing environmental organizations like Greenpeace, as well as other groups and governments interested in climate protection. The upstart activists described it as the “first open source, web-based day of action dedicated to stopping climate change.”

It was a surprising success. On April 14, 2007, tens of thousands of Americans held simultaneous rallies in some 1,400 places across the country telling Congress to “step it up” and reduce carbon emissions 80 percent by 2050. Their grassroots pressure likely helped convince presidential-hopeful Barack Obama to co-sponsor an ultimately doomed bill in the Senate.

After a second successful Step It Up event, McKibben and the Middlebury graduates created 350.org. Co-founder Phil Aroneanu told me that leading up to the 2009 UN climate convention in Copenhagen, “we realized there was this space to have a public show of force and show that folks really care about this issue when most of the leaders didn’t really feel that.”

Using a handful of foreign contacts they’d made at previous UN climate conventions, the team began planning the “International Day of Climate Action” on October 24th, little more than a month before delegates were due to meet in Denmark.

Organizing via Skype, chat, and text messaging, and via activist social networks like Change.org, the 350.org team mobilized over 5,200 actions in 181 countries, as you can see in this video:

“There might have been one person from Malawi,” Aroneanu said, “and as long as we kept communicating with them and showed them how this could be a great way to build up networks in their own countries, they did the hard work of organizing and reaching out to people who didn’t have access to the Internet.”

In one recent initiative, 350.org set up an online petition encouraging world leaders to install solar power on the roofs of their official state residences. It has been signed by tens of thousands of people. This was combined with blog support from Change.org and others, as well as a high-profile road trip from Maine to the capital with the first White House solar panel, a relic from the Carter administration.

Although McKibben and other 350.org members were initially rebuffed in their meetings with Obama administration officials, earlier this week Energy Secretary Steven Chu announced that new solar panels would be installed, making the White House “a symbol of America’s commitment to a clean energy future.” So far, leaders in India and the Maldives have also agreed to take up 350.org’s solar challenge.

In an article calling McKibben one of the world’s top global thinkers, Foreign Policy magazine described the 2009 Day of Climate Action as “the largest ever coordinated global rally of any kind.” Yet, despite the unprecedented organizing success of 350.org and behind the scenes pressure from countless other environmental organizations, diplomats in Copenhagen failed to agree to a plan that would reduce CO2 to that magic number. A half-year later, a much discussed climate bill also died in the U.S., the world’s largest historic greenhouse gas polluter.

With international negotiations at a standstill and U.S. legislation at a stalemate, 350.org, Greenpeace and others in the environmental community are using every new media tool available to them to share their climate protection message and recruit new organizers.

The most visible display of this renewed focus on digital organizing will be this Sunday’s “Global Work Party,” where activists from around the globe will “pressure our leaders to Get To Work themselves by passing strong climate policies promoting clean energy and reducing emissions,” as 350.org’s website explains.

With two days remaining until 10/10/10, the group has registered nearly 7,000 events in 188 countries. Coordinated online outreach by 350.org and its partner organizations has made the immense scale of the Global Work Party possible. Jess Leber, editor of the environment blog at Change.org, has worked with 350.org to feature a Get To Work series guest posts from its organizers around the world. Chris Eaton, an online community organizer for Greenpeace, spent all of last Friday calling and emailing people in the climate movement to get them involved in one big social media push ten days before the 10/10/10 event, which like previous 350.org events his group is co-sponsoring.

“I’ve found that’s really effective,” Eaton said. “If you get everyone to do the same thing at once online it’s like a wave that gets a lot of attention.”

Greenpeace certainly knows how to attract attention. For nearly 40 years, this confrontational environmental group has been adept at building what co-founder Robert Hunter referred to as “Media Mind Bombs”: “reaching the public consciousness through dramatic, camera-ready opposition to environmental crimes.”

As the media have fragmented and cameras have proliferated, the activist group has had to expand the scope of its non-violent direct-action campaigns. Sure, British Greenpeace members will still scale Westminster Palace to protest what it perceives as Parliament’s weak climate efforts. But increasingly its activists are downloading online toolkits for decentralized events like a Bake Sale to Save the Whales or using the power of social media to push for greater climate protection.

In one campaign, Greenpeace’s online organizers drew attention to deforestation, a major contributor to global warming, by targeting Nestle. The confections company was making chocolate with unsustainably-sourced palm oil, a fact Greenpeace pointed out in a graphic video depicting an office worker eating a bloody Kit-Kat made of an orangutan finger that was viewed 350,000 times the first day it was posted. After Nestle made YouTube remove the grisly campaign ad, the environmentalists protested at its headquarters, jammed its phone lines with complaints, and plastered its Facebook wall with negative comments until the company announced a “zero deforestation policy.”

One of Greenpeace’s ongoing campaigns is protesting against Facebook, one of the social media tools it used in its battle against Nestle. The environmental group singled out the Internet giant earlier this year as a part of its Cool IT campaign to encourage tech companies to use clean power. Facebook attracted the ire of Greenpeace in February when it announced plans to build a server farm powered by dirty coal-fired energy. To protest, Greenpeace started a Facebook group, We want Facebook to use 100% renewable energy, that currently has nearly 300,000 members. They also encouraged online activists to send a message directly to CEO Mark Zuckerberg’s Facebook account.

When the company announced in September that it planned to double the size of the dirty data center, Greenpeace stepped up its online campaign with the charmingly inflammatory video posted below. The crudely animated short mocks Zuckerberg and tells him to “unfriend coal.” It has already attracted more views than the Facebook protest group has members. You can watch it here:

The campaign has not yet succeeded in getting Facebook to switch entirely to clean energy, but Zuckerberg responded to one message saying, “We’re moving in the right direction here.” Whether he and his company get there fast enough to ward off further action from Greenpeace remains to be seen.

Maintaining their new media momentum in a changing technological landscape will be a challenge for the climate movement. While Change.org’s Leber told me how her site is aiming to become the “YouTube of social change,” Greenpeace and 350.org have both deployed new media tools experimentally rather than tactically. This makes sense to some extent, but their better financed opponents in the fossil fuel industries are not leaving the development of social networks to chance. (For example, read this remarkable New Yorker article about the Koch Industries-fueled Tea Party movement.)

The climate movement is seeking low cost, easily accessible online tools. 350.org is interested in “boot-strap solutions that we can use extremely cheaply and scale up,” Aroneanu said. His organization recently ditched their iPhone app in favor of a simple mobile website.

Greenpeace’s online organizer Eaton said his number one rule is “organize where people are at” and he pointed out that there simply aren’t a critical mass of activists on Foursquare yet.

Regardless of the precise new media mix, the climate movement is committed to continuing the push for climate protection with what Aroneanu called “open source” activism. Social activism sites like Change.org feature blog content about environmental challenges and online petitions that can recruit activists for 350.org and Greenpeace. The organizers at those groups can then mobilize high-impact online climate campaigns or on-the-ground distributed actions across the nation and around the globe. The big, one-day march on Washington has been done so many times, no one notices anymore.

“We really focus on developing grassroots leaders,” Aroneanu explained. “And we feel like that grassroots leadership is what’s going to lead this movement to a place where we actually are able to pass the kind of legislation we need to pass.”

Legislative deal-making is worthless without deep pockets or a broad base of public support.The failure of the recent climate bill proved that environmental groups cannot outspend or outmaneuver the fossil fuel industry.

“Everybody understands that we need to build a movement beyond just this piece of legislation,” 350.org’s Aroneanu said.

The successes his organization, Greenpeace and others have had organizing in the expanding digital space has made activists realize that savvy use of new media is required to construct a lasting climate constituency.

Corbin Hiar is the DC-based editorial assistant at MediaShift and climate blogger for UN Dispatch and the Huffington Post. He is a regular contributor to More Intelligent Life, an online arts and culture publication of the Economist Group, and has also written about environmental issues on Economist.com and the website of the New Republic. Before Corbin moved to the Capital to join the Ben Bagdikian Fellowship Program at Mother Jones, he worked a web internship at the Nation in New York City. Follow him on Twitter @CorbinHiar.