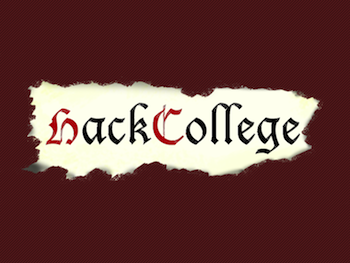 Kelly Sutton was a 19-year-old student at Loyola Marymount University when he launched HackCollege.com
I've never been a person who has felt like school is that important, because I feel like I can learn a lot more in real life." - Zephyr Basine

In April 2007, Zephyr Basine arrived at school for her noontime biology seminar — and immediately zoned out. Instead of learning science, the sophomore at the University of Massachusetts Amherst carried out a “fashion-scoping session.” While the professor spoke about organisms and evolution, Basine focused on her fellow students’ outfits and accessories, scouting for something new, chic or trendy.

Suddenly, mid-lecture, she beheld a sight that made her smile: A bright white shiny patent leather headband, sported by a female classmate two rows in front of her. Her brain raced with possibilities for other students. Should they go with patent, pleather or plastic? Should they rock out the wide or mini size? And should they throw it atop bedraggled bed-head or a dressier updo?

In the end, the biology talk didn’t stick. “Science just isn’t my thing,” Basine admitted. But the class was a success from a couture perspective, and Basine has the blog post to prove it.

The shiny headband treatise was one of the first entries published on College Fashion, a blog Basine began on a whim while a UMass undergraduate. She quickly spun it into a brand name that’s known and followed worldwide.

College Fashion is a trendsetter; it’s the first fashion blog by college students for college students. It is also wildly popular, boasting more than one million page views per month. (It was identified to me by fans from St. Petersburg, Fla., to Singapore simply by its acronym, CF.)

“I’ve never been a person who has felt like school is that important, because I feel like I

can learn a lot more in real life,” Basine said. “I would kind of skip class a lot to do my site, but I still managed to do pretty well. I graduated with a 3.5 GPA. So it definitely didn’t ruin my academic standing … but CF definitely became my main hobby. It was my extracurricular activity.”

Basine is part of a select group of students who have constructed worthwhile new media niches — and become stars — while still in school. Though student entrepreneurs are not new, it seems that more and more of them are taking advantage of the upheaval in the media world to stake their claim.

These pioneers, and the growing number of students following in their stead, are upending the old media establishment. They are also realigning higher education by creating personal media fiefdoms and full-scale organizations without relying upon traditional leg-ups like an internship, a campus newspaper editorial post, an advanced course, a campus work-study or a college degree.

For example, Wesleyan University junior Peter Frank works more than five hours daily on his student networking site CollegeACB. He still has time for classes, a club sport, and socializing, but, as he told me in May, “[ACB] is my primary collegiate experience.”

An Imprint Magazine profile the previous May confirmed ACB as his top priority: “Peter Frank is a busy man these days. Three months ago, his company closed a major deal that increased their business and his workload tenfold overnight. Right now, he’s designing a vision, developing new product features, and selling space to advertisers. Afterwards, he’ll take a business call and reply to emails. And once he’s done with that, he still has to study for a Psych final and get dinner before the dining hall closes.”

For post-millennial student media entrepreneurs like Frank, college is not a way station on the road to success. It is not a farm system for enhancing future professional prospects. It is not a chance to earn credits and bide time for the next step. It is an end — and an education — unto itself.

Yet, the real learning is not happening in class. Instead, students’ online start-ups and personal brand building have become their most influential educational vehicles.

“My schoolwork certainly took a beating as a result of College Humor,” admitted Abramson. “I got so much more excited about building something real than working on a case study in business class or something like that … Every free second I had was spent working on the site. You know, when everyone else was in the library working on schoolwork, I was in my room, emailing Ricky [Van Veen], trying to sell an ad deal or something else specific to College Humor.”

Kelly Sutton has similar memories about his efforts co-founding and overseeing the student advice site HackCollege while at Loyola Marymount University. He began without a plan. Sutton, 19 at the time, enjoyed reading the popular productivity blog Lifehacker and simply thought, “Hey, there needs to be a Lifehacker for college students, and I’m going to do that.’”

In his opening post, Sutton confessed that he did not expect the site to make much of an impact. “We have joined the ranks of 100 million people in the blogosphere,” he wrote. “They say a new blog is created every half second. So we guess 6:03:31.5 is our half second.”

For Sutton, that half second expanded to more than three years, 10 semesters, and 500 posts. It spread to hundreds, thousands, then hundreds of thousands of unique visitors. It brought him to tech conferences across the country. It spun off a popular podcast, an online video series, a British version of the site, a technology consulting service, and even patented sweatshirts. It became the vehicle through which he obtained internships, media attention, public recognition, and a post-graduation job in New York City as a software developer at Blip.tv. Eventually, it consumed his entire university experience.

“The opportunities that resulted from HackCollege approached, passed and exceeded any definition of ‘expected,’” Sutton said. “My later years of school were characterized more by flights to random ends of the U.S. than exams or term projects.”

He noted, “It doesn’t take much to start a blog and writing for it daily is not the most difficult thing in the world, but everything that you have to learn around doing that is really, really tough.”

“On a personal level, this is what I live for and I don’t think I’ve ever learned more from any experience than I have with On Harvard Time and HUTV,” he said. “When people ask me what I major in, I usually tell them ‘extracurriculars.’ As much as they usually think I’m joking, it’s actually pretty serious. That being said, I’m a fine student. I’ve just made it pretty clear that that’s where my focus has been.”

The ultimate value of the university experience, in the eyes of undergrad entrepreneurs: The time and financial freedom it offers to experiment.

Dan Reimold is an assistant professor of journalism at the University of Tampa. He writes and presents frequently on the campus press and maintains the daily blog College Media Matters, affiliated with the Associated Collegiate Press. His first book on a major modern college media trend, Sex and the University: Celebrity, Controversy and a Student Journalism Revolution, is due out this fall by Rutgers University Press.