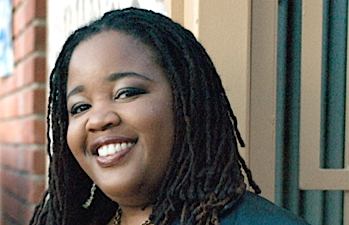 Farai Chideya's new show, a news and entertainment hybrid, is scheduled to launch just in time for the midterm elections.

These days it’s not so unusual for a public radio program to boast a companion blog. But few shows begin online and move to broadcast.Pop and Politics is the exception.

Farai Chideya — a high-profile public affairs reporter, novelist, and the former host of NPR’s late and lamented African-American current events program “News & Notes” — began the Pop and Politics site 15 years ago when she was working at CNN as a political analyst. The project, she said, has evolved through “a few different lifecycles” — from a multi-author blog covering issues of race and culture, to a student journalism training organization, to its latest, a multi-platform radio show.

I have been a part of 'converged media' but it was too soon or didn't quite work. Now, all of the market conditions are right." - Farai Chideya

“I decided that now was the time,” Chideya said. “There have been so many times that I have been a part of ‘converged media’ but it was too soon or didn’t quite work. Now, all of the market conditions are right.”

She described the project as more of a “media ecosystem as anything else,” comprised of a broadcast, podcast, social media feeds, and mobile content — all under the Pop and Politics brand.

On air, the program — formally titled “Pop and Politics Radio With Farai Chideya” — will launch in a pilot version just before the midterm election. It will be a series of hour-long broadcasts recorded live-to-tape from spots around the country where there are critical races. The goal is to feature perspectives that aren’t always highlighted in national election coverage.

She plans to work with American Public Media’s Public Insight Network to uncover local sources for stories. Click on the video below to hear her describe the show’s format.

A mixture of reporting, a panel of guests, interviews and live performance, Pop and Politics Radio draws inspiration from popular late-night comedy programs by mixing news and entertainment.

“I want to enjoy the act of making media, and I want people to enjoy the media I produce,” Chideya said. But instead of just relying on celebrities and politicians to comment on the day’s events, she’ll draw in independent producers and reporters to contribute fresh content.

Her program targets a demographic that isn’t young exactly — around 35 — but younger than the usual boomer-generation NPR fan, as well as hipper and more multicultural. Online, Chideya notes, with search, peer recommendation, streaming audio and podcasting, it’s now possible to find audiences for public radio content, “even among those who don’t consider themselves public radio listeners.”

The show will be produced out of WNYC, the New York-based NPR station that is also home to such innovative shows as Radiolab and The Takeaway.

Fans of News & Notes — who launched an online campaign protesting that show’s cancellation — will be excited to tune in. But they still have awhile to wait. “It’s going to be a bit of a slow bake,” Chideya said. Right now, she’s focused on revamping the Pop and Politics site for its latest incarnation.

Jessica Clark directs the Center for Social Media’s Future of Public Media Project , and is a Knight Media Policy Fellow at the New America Foundation.