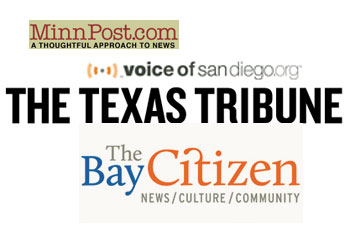 The erosion of the traditional business model for news has led many to go down the non-profit path. The result is a slew of new non-profit news websites. The Bay Citizen, which launched at the end of May, is the newest and joins the likes of ProPublica, MinnPost, and the Texas Tribune, to name just a few. But as the closing of the non-profit Chi-Town Daily News last year indicates, running a non-profit isn’t easy.

Perhaps no one understands this as well as Jim Barnett. After almost two decades as a newspaper reporter, Barnett threw his efforts into launching his own non-profit news service in 2005. Managing a non-profit proved to be a major challenge and Barnett realized he’d need some new skills in order to be successful in this space. These days, he’s pursuing a masters in non-profit management at George Washington University, working as an in-house adviser to AARP’s publications group and doing some editing for the Washington Post News Service at night. He’s also been expanding on his academic work on his blog, The Nonprofit Road, and more recently on Harvard’s Nieman Journalism Lab blog.

I spoke with Barnett to examine the outlook for non-profit journalism, the government’s role in the future of news, quality indicators for good non-profit news sources, and more.

Jim Barnett: While it is true that the bloodletting of the past couple of years has created a huge talent pool for non-profit startups, I think the model really is riding its own trajectory. What now seems like a flurry of interest I think is actually the result of a longer-term trend that I think will continue as the economy recovers and the newspaper industry stabilizes.

I think the recent uptick of interest in the non-profit model can be traced to events in 2004, as it was becoming painfully apparent to many in the news business that the newspaper model would not translate simply or easily into the digital age.

One was Louisiana State University’s March 2004 symposium, “News in the Public Interest: A Free and Subsidized Press,” which attracted thought leaders. The non-profit model was a major topic of discussion, and it soon began gaining traction within journalism circles.

In November 2004, Columbia Journalism Review published an essay by Phil Meyer of UNC-Chapel Hill entitled “Saving Journalism.” In it, Meyer talked about the non-profit model as a way ‘to keep the spirit and tradition of socially responsible journalism alive until it finds a home in some new media form whose nature we can only guess at today.’

After a lot of talk that year, things really started taking off. In 2005, the Voice of San Diego was launched. Two years later came ProPublica and MinnPost. Today, there are many more, small and large. And now, other non-profits that do advocacy and education are exploring how they can use the tools of journalism to help fill the void.

How will the non-profit model evolve over the next five years? I don’t think anybody can say with any degree of certainty. We’re in a period of great experimentation, and much will be up to luck and circumstance. But when you think about how much has happened since 2004, I do think it is clear that the sector has achieved a critical mass that will carry it for years to come.

You’re no stranger to criticism of non-profit journalism. Do you believe the model has its limits or is it journalism’s silver bullet?

This is not a new revelation. I like to remind people that the non-profit sector in journalism dates to 1846 when a group of New York newspapers formed a cooperative to cover the Mexican-American War. That cooperative serves us now as the non-profit Associated Press, and the economic forces that made it a good idea then remain in force today.

Is there anything non-profit journalism does better than traditional newspaper journalism in its heyday?

Barnett: That remains to be seen. But I do think the non-profit model does as good a job as any of matching newspapers’ ability to take risks, throwing reporters and resources at a story without any promise of financial return. In most for-profit models of the digital age, news stories must serve two masters: Each must meet the standards of journalistic inquiry and each must carry some share of the freight by generating online advertising revenue. In the non-profit model, the case for philanthropy can be built around the pursuit of objective journalism without the same pressure to generate immediate readership and revenue.

You’ve written about the Newspaper Revitalization Act and the FCC’s Future of Media project. What role should the government play in the future of journalism?

Barnett: First, we need to separate the concepts of journalism and the media — in this case, newspapers — that deliver it. I’m not a huge fan of the Cardin bill because it attempts to give newspapers — not necessarily journalism — a special place in line for government help. I think government creates problems in any industry when it starts picking favorites, no matter how noble the cause. If newspaper publishers really want to operate under non-profit status, they can do so under existing law. But the real problem is the economics: Publishers must serve shareholders first, and they generally do better by continuing to cut costs (read: news staff) even if they lose circulation and quality. The Cardin bill does nothing to reverse the newspaper death spiral.

Do you think public subsidies, such as the ones suggested by Robert McChesney and journalist John Nichols, are a good idea?

Barnett: Whether one thinks subsidies are good or bad, they are a fact of life for any major media enterprise. Earlier this year, David Westphal and Geoffrey Cowan at USC released a masterful report showing the pervasiveness of government subsidies to news media of all kinds, and they argued that this is exactly how the Founding Fathers intended it. I think their report enlightens the debate immensely. To oppose subsidies on principle is a bit like the health care reform protestor last July demanding, “Keep your government hands off my Medicare!” But what level or what form any subsidy should take is way beyond my little realm of expertise.

With so many different journalism non-profits sprouting up, earlier this year you blogged about the need for a ‘Good Housekeeping seal of approval’ for non-profit journalism and outlined some ideas for criteria. You said you’d be doing additional research on this and that it would be a topic of discussion at the We Media conference. So we’re following up, any new insights?

Barnett: I’ve wrapped up my research and am working on a post for the Nieman Journalism Lab that I hope to publish soon. The question I tried to tackle was this: ‘What steps can non-profits take if they want to be legitimate news providers?’ There are some great examples out there, and not all come directly from within boundaries of traditional journalism. Some advocacy non-profits such as Human Rights Watch establish legitimacy as fact-finders and align their case for philanthropy with that mission. Other non-profits such as the American Red Cross use the tools of journalism as a means of accountability and transparency to donors. Stay tuned, my post should go live this week.

What’s next for you? Any plans to expand your role in the non-profit journalism world?

Barnett: One thing’s for sure — I’ll be wrapping up my academic career next year when I get my master’s from GW. Beyond that, I hope to apply some of the things I’ve learned to my day job as a strategic analyst at AARP. We put out some high-quality publications, and I think we have a lot to contribute at a time of great change in the news business.

What role do you see non-profit news organizations playing in the future of the press? Share your thoughts in the comments.

A writer, reporter and media consultant, Jaclyn Schiff is up at the crack of dawn to tackle the headlines of the day for her job at the non-profit Kaiser Health News. When she should be catching up on sleep, she can usually be found updating her Twitter feed or Tumblr blog, MEDIA Schiff (pun intended). Schiff covers non-profit news for MediaShift.