Social Media Training: From Conferences to the Classroom 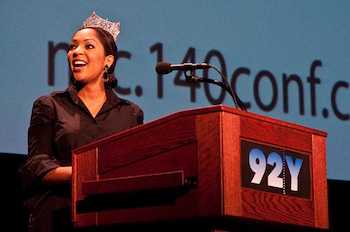 She sat in a chair signing an autograph, as the camera’s flashes made the stones on her Ms. America crown sparkle. A man knelt about five feet in front of American royalty and drew a sketch of her on the iPad.

Caressa Cameron, Miss America 2010, was addressing the audience at the 140 Character conference in New York City last month. Cameron spoke about how she is using social media to support her duties as a social ambassador and Goodwill Ambassador for the Children’s Miracle Network, which raises funds for children’s hospitals nationwide.

"For technology to be useful it has to fit into our workflow and our life flow." - Sree Sreenivasan

The 140 Character conference is just one of a long lineup of social media training programs offered by marketing professionals, celebrities, and mainstream headliners. Seminars and presentations educate thousands of people on how to use social media to reach out to their target communities. Attendees mostly learn the business applications of social media and ways to engage people using social networks to promote causes, job hunts and other initiatives.

Jeff Pulver, organizer of the 140 Character conference in New York City, said the way that people and organizations communicate has dramatically changed. He was master of ceremonies to a long lineup of people who have been able to leverage Twitter and other real-time social applications to develop their businesses and professional profile.

“Here at the 140 Character conference we are looking at the effects of the real-time Internet on business and also on people,” Pulver said. “Four words: listen, connect, share and engage. If you understand what that means you have a head up on everyone else who doesn’t.”

He said that, regardless of the different professional backgrounds at the 140 Character conference, we are all people.

“This conference celebrates life,” Pulver said. “It celebrates the humanity of it, and some of the amazing business opportunities that are becoming because of it.”

One speaker at the 140 Character conference is a world-renowned entrepreneur by the name of Gary Vaynerchuk. He built his family’s wine business from a $4 million brick-and-mortar store to a $60 million dollar business supported by a retail website, and a vlog where Vaynerchuk reviews a wide variety of wines. He’s also a bestselling author.

I caught up with Vaynerchuk when he was back at home and conducted a video interview with him about social media training and the lessons he’s learned. Two people also tweeted questions for Vaynerchuk before the interview — Eric Sornoso and Rodney J. Woodruff — and Vaynerchuk responded to both during our discussion:

Along with Vaynerchuk, I ran into Rick Murray at the conference. He’s the president of Edelman Digital. He shared some of the logistics of Edelman’s social media training course. The first phase is all about defining ethical behavior on social networks.

“The second thing we talk a lot about is community management,” Murray continued. “[What] you could do to help our clients out whether it’s either promoting their brands or it’s protecting their brands, in either shape or form; the third thing…is how you craft the kinds of content that the audience which your clients are trying to seek is compelling.”

The Edelman training program also covers how content can be optimized for social search. The classes cater to all the regions in which Edelman operates and are culturally sensitive to help employees appropriately engage people all over the world. Each online module is self-paced. Upon completion of each training sequence, a belt is awarded to a participant, as in karate. Employees must schedule the four minutes to take each module to be awarded a belt and be able to take the next training sequence.

“Once people are underway we’ve actually had internal competitions to get to various belt levels in office competitions,” Murray explained. “We’re not against public shaming as well; we have names on walls of people who haven’t taken any of the modules at all.”

Sree Sreenivasan, dean of student affairs and digital media professor at Columbia Journalism School, started the institution’s first public Social Media Skills course. The class is four weeks long and, as it states in the syllabus, aims to teach journalists how to “find new story ideas, trends, and sources; connect with readers and viewers in new ways; bring attention and traffic to their work; and help them create, craft and enhance their personal brand.”

I took Sreenivasan’s workshop called “Smarter Internet Surfing Tips” while in my broadcast journalism class in New York University. He has been teaching Internet Surfing Tips through his online directory since 1998. He helps journalists learn to use the social media tools that will help them do their job more efficiently. Sreenivasan carefully chooses which platforms his students should be using as journalists and media professionals.

“I’m not on MySpace but in certain industries MySpace is absolutely critical, like the music industry, entertainment, but it doesn’t make sense for me at the moment,” Sreenivasan stated. “I say that for technology to be useful it has to fit into our workflow and our life flow; when it does both, then its ready for use around the country, around the world.”

Sreenivasan said that training is necessary for everyone. “I know somebody who has 25,000 followers on Twitter but still wants help,” he said.

Sreenivasan instructs his students to be active on digital communities before big events happen. He stresses that students should be in “listening mode” and participating in the digital communities they are engaging. “I tell people that when the plane lands in the Hudson, it’s too late,” he said.

Moreover, Sreenivasan teaches that social media is simply there to support your professional endeavors. Your skills and background should still be proficient.

Although Sreenivasan’s class is designed primarily for journalists, people of all professional backgrounds have attended his class, such as marketers, publicists, and librarians. Sreenivasan said he has instructed people under the age of 15 and over the age of 80.

I first met Tamar Weinberg as a power user of the social news channel, Digg.com. Weinberg has been working online as a social media consultant for five years and been using social digital tools for 17 years. She is also the author of “The New Community Rules,” which teaches readers how to raise awareness for their brands using blogging, micro-blogging, and other social platforms.

She has spoken at numerous conferences and has delivered lectures for groups ranging from 30 to 2,000 people. She has given guest lectures at New York University and Baruch College in New York City. Weinberg teaches people to participate by contributing to social platforms before trying to have them bear value. She discusses best practices and tactics, which attendees could use to expand their business presence online. Weinberg also discloses some tactics that she employs to continually learn how to engage target communities on digital networks.

“I would recommend finding influencers who are of interest to you; find out who influences them,” Weinberg said. “It’s very easy to do because if they have a Facebook fan page, if they have a Twitter page, they’re often sharing links and tweeting about these individuals. Find out what they’re sharing and use that as a guideline as to what to follow.”

Weinberg said that she works with people in organizations large and small, who fill a variety of roles. Working with multiple-levels of hierarchy can sometimes pose a challenge in training. She notes that lower-level personnel usually adopt digital platforms, which can often lead to internal challenges in terms of pushing ahead new initiatives.

“Things don’t happen quickly because of the need to go through legal red tape,” Tamar said. “If you get the CEO on onboard things will happen a lot quicker.”

Most social media training programs focus on managing and building communities on major social platforms such as Twitter, Facebook, Digg etc. Glen Allsop runs ViperChill, where he teaches his readers how to build social communities on blogging platforms. In six months Allsop has built ViperChill to reach 1,500 unique visitors daily and 70,000 pageviews monthly; the site has over 6,000 subscribers.

“As I make money online on other sites, I don’t need to monetize it,” Allsop said. “I do have a blog that makes over $10,000 per month which received 800,000 pageviews in March, with most of its traffic coming from Google.”

Allsop built his first website at the age of 15 after he saw a friend build a site using Lycos Tripod Sitebuilder. Allsop built websites about his passions such as DJing and optimized them to receive more exposure from search engines by guest posting on other blogs and using other social media engagement tactics he teaches on ViperChill.

“Find blogs relevant to your industry by searching Google for phrases like “top [insert topic here] blog” or “best [insert topic here] blogs” to find relevant sites to engage with,” Allsop said. “Once you’ve found popular blogs in your target market, start interacting with the author on multiple platforms like Facebook and Twitter to build up a relationship.”

Allsop is among the few people teaching how to use social news aggregation channels, like Digg, but with a niche focus.

“For example, there is a social voting website for the IM [Internet marketing] industry, called Sphinn,” Allsop said. “There are also ones for technology, sports like basketball, and even country specific sites like IndianPad.”

Allsop’s biggest challenge in teaching the use of social media channels to connect with their target communities lies in keeping people from always wanting to manipulate the digital networks. He also notes that convincing heads of management in large companies is harder because it is difficult to track results than when using search engine optimization and pay-per-click advertising campaigns.

Neal Rodriguez features some of the brightest minds in cyberspace including thought-leaders in social media marketing and search engine optimization on nealrodriguez.com, where he offers his own social media and blog training program.