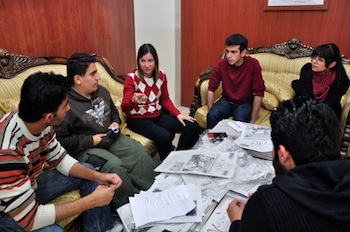 When Namo Kaftan was 9 years old, his father, a biomedical engineer, brought a laptop from work home to the family’s residence in Sulaimani, Iraq. For Kaftan, now 21, it was love at first boot-up.

“I was really amazed to see a new advanced technology like that,” he said. “I guess at that time nobody even knew what it was called in my city…That night I stayed up very late to see and figure out — what was that thing?”

The extent that we can get the student body to participate as citizen journalists, that will be a game changer." - Jackie Spinner

He said he tinkered for hours, until a pop-up error message on the screen led to a frantic troubleshooting plea to his uncle.

“Thank God my uncle was around and he kind of knew a little bit about it and he could read English, so he helped me to get it fixed,” he said. “From that day, I vowed to myself not to tell anyone to fix anything for me about computer-related things in order not to be embarrassed in front of anyone.”

In the decade that followed, Kaftan became a self-proclaimed, self-taught computer geek. In part to help his pursuit of a career in IT, he enrolled at the American University of Iraq in Sulaimani, a nearly three-year-old private university in the country’s northern Kurdish region that is modeled after Western liberal arts schools. Yet, even with his high-tech passions and online experience, when an email arrived in Kaftan’s inbox naming him web editor of the new student newspaper, he described his initial reaction in two words: excitement and confusion.

The school’s paper, the AUI-S Voice, is something new within the Iraqi mediasphere. It is the first editorially independent student newspaper in the country’s history, boasting a clear demarcation between commentary and news and not even a whiff of political influence.

In late January, the first issue of the Voice appeared in print on campus. The paper simultaneously premiered a three-tiered online presence: a website built on Drupal; a Twitter feed; and a Facebook page now with roughly 240 fans. That number is especially impressive given the school’s enrollment of 375.

From the beginning, student staffers were interested in utilizing the Internet as a means to share their Voice with the world.

Members of the International Press

Jackie Spinner, a former Washington Post reporter who served in the paper’s Baghdad bureau, was instrumental in launching the Voice and currently serves as its faculty adviser. She said the online push has been difficult, but is essential to her larger mission.

“It’s not like we had to have this big committee meeting and decide what part of the century we wanted to be in as a student newspaper,” she said. “It’s not been a question. We’re going to have both a print and a web presence. I want [the students] to do multimedia. Some of our students are not just going to be journalists in Iraq. I see them as being members of the international press so they have to know these skills in order to be global. I want them to compete at a global level.”

She paused briefly before confessing with a laugh, “Although I have to tell you, it did make me a little nervous when the students signed up for a Twitter account and they don’t even know how to write a lead yet.”

Along with ensuring that the staff grasp the web and print basics, the major online issue for the Voice is bandwidth. Internet access is still difficult at AUI-S, leading to numerous complications. Students cannot yet get online from their dorm rooms. They have also been blocked from accessing sites such as Facebook and YouTube on campus. At the moment, a news site filled with multimedia features could overload the school’s system.

As journalists tend to do, the Voice staff have covered the university’s web issues. An editorial cartoon in one early issue shows a smiling inmate surfing the web in a prison, while a student screams in earnest from an AUI-S dorm balcony, “Why don’t we have Internet?!”

The staff separately reported and editorialized [PDF] on the controversial campus Facebook restriction. The editorial opposed the blanket campus ban, instead suggesting an open access window after classes concluded each day. As the piece, written by Alhashimi at the behest of the entire editorial board, argued, “Prohibition, deprivation and banning should not be part of AUI-S students’ vocabulary.”

Two weeks after the issue containing the editorial was published, the university began allowing students to access Facebook from a few wireless hot spots on campus.

“I am proud of myself, because we have to discuss the problem,” said Alhashimi. “What is the difference between nowadays and the days before 2003 [when Saddam Hussein was still in power]? Before, we should say everything is right and everything is correct and if we said anything wrong they will put you in jail. Now, as a student, we can say this is right and this is wrong because I believe and the students believe and they should hear our voices. That’s why we call it the Voice.”

At this very early stage, the Voice website sports a static mix of stories, photos, and the occasional streaming video. Slideshows and separate audio are also slowly being rolled out. The long-term aim is to unveil a multimedia-rich, interactive online platform, enabling all AUI-S students to publish content and freely discuss issues and ideas.

“Most of the newspapers in Iraq are online, so having a web version is not unique,” said Spinner. “Having an interactive web version is going to be something that’s unique. The idea of the citizen journalist does not exist here. So the extent that we can get the student body to participate as citizen journalists, that will be a game changer. Stay tuned.”

Dan Reimold is a visiting assistant professor of journalism at Singapore’s Nanyang Technological University. He writes and presents frequently on the campus press and maintains the daily blog College Media Matters, affiliated with the Associated Collegiate Press. His first book on a major modern college media trend, “Sex and the University: Celebrity, Controversy and a Student Journalism Revolution,” is due out later this year by Rutgers University Press.