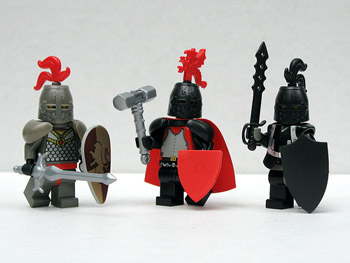 Citizen journalists: looking for a white knight to get them included in a shield law (image courtesy of Dunechaser via Flickr

When Sen. Charles Schumer amended the Senate’s bill to exclude unpaid reporters, bloggers, and citizen journalists from a proposed federal shield law, many in the Internet and journalism community were outraged. In the wake of the change, MediaShift published an article that argued Why Bloggers and Citizen Journalists Deserve a Shield Law. [Ed. note: please see update at the bottom of this post.]

It is an all-or-nothing game, and right now citizen journalists are losing."

The current lobbying effort in support of the shield law has come from advocacy organizations such as The Reporters Committee for Freedom of the Press (RCFP), along with media outlets themselves. While the RCFP may have spent uncountable hours lobbying, media companies are the real engines behind the push for a federal shield law. Media companies donate to advocacy organizations, and have the name recognition needed to convince Congress of the shield law’s merits.

Before Sen. Schumer’s amendment, citizen journalists had been piggybacking off of the current lobbying effort. While newspaper editors were busy throwing their weight around the halls of Congress, Joe the Blogger watched from his sofa. When Lucy Dalglish, executive director of RCFP, spent her weekends convincing Congress of the shield law’s benefits, many were filled with hope. But what happens if media outlets are forced to jettison citizen journalists in order to obtain their holy grail, a federal shield law? Will media companies scrap the whole effort to protect free-riders? I think not.

There is the argument that if unpaid reporters are not protected under this version of the federal shield law, Congress could enact a subsequent law that would extend the privilege. Such an argument is wishful thinking, to say the least.

Once traditional media outlets obtain a federal shield law, something they have been screaming for since the 1970s, the lobbying money will dry up. The heavy-hitters, such as the New York Times, Washington Post, ABC, CBS, NBC etc., will direct their attention, one imagines, back to producing quality journalism. Without the backing of these media Goliaths, citizen journalists do not stand a chance of convincing a hostile Congress and a reserved President that they deserve the law’s protection as well.

Moreover, it is against the traditional media’s corporate interest to lobby on behalf of unpaid journalists. Reporters have long claimed that a federal shield law is necessary in order to produce proper journalism. They state that in order to report on issues of public concern, journalists need the ability to keep confidential sources.

As not to be totally doom-and-gloom, there could be a bright spot developing. The avalanche of opposition to Sen. Schumer’s amendment raises the possibility that if the shield law turns a cold shoulder to citizen journalists, someone could harness that discontent and turn it into a lobbying campaign.

However, two problems still persist. First, despite the tireless efforts of the RCFP and the like, no such harness has been fashioned. Second, I am afraid to say that we have seen the high-water mark for the general public’s interest in the federal shield law.

I am not proposing that the federal shield law should be scuttled unless citizen journalists are protected. All I want is for members of Congress and President Obama to understand that if citizen journalists are not protected by a shield law when it is enacted, then they will have foreclosed the protection for this vital portion of the fourth estate for the foreseeable future.

UPDATE November 2, 2009: Since this article was first published, the Senate, White House, and media company representatives reached a tentative deal that would include unpaid journalists under the shield law’s protections. While the compromise is certainly a positive development, we’re not out of the woods yet. Even if the Senate Committee on the Judiciary accepts the compromise, the bill must still get through the full Senate. Throughout this process, lawmakers should keep in mind the consequences that would result from leaving unpaid, citizen journalists out in the cold.