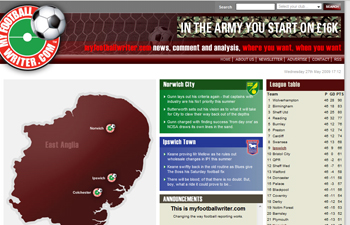 Early last month, the Wall Street Journal reported on a dying breed of newspaper baseball beat journalists. “As newspapers cut budgets and payrolls, the press boxes at major league ballparks are becoming increasingly lonely places, signaling a future when some games may be chronicled only by wire services, house organs and Web writers watching the games on television,” reported Russell Adams and Tim Marchman.

Because of the increasingly tight budgets at news organizations, newspapers are finding it harder to justify paying for a writer’s plane tickets and expensive hotel costs to follow a local team from game to game, especially as they compete with bloggers and online sportswriters who are able to comment on the games in front of their television sets. Assuming that this trend extends outside of baseball writing, what future is there for laid-off beat writers that have spent their careers covering their favorite sports team? After years of having constant access to the coaches and players they’ve gotten to know so well, would they be able to continue their beats?

A football network in the U.K.

For one possible answer to this dilemma, one would have to travel overseas to Norwich, U.K., where a man named Rick Waghorn has been writing for several years. The journalist spent over a decade covering the Norwich soccer club for the Norwich Evening News, a newspaper that spent money during his employment advertising his face on the back of buses in order to promote his brand.

But back in 2006, Waghorn, like thousands of other newspapers journalists, found himself swept into a redundancy process, and like some other laid-off reporters, he decided to continue on with his beat independently. Waghorn began reporting on Norwich’s soccer club and published his content on his own site, with the idea that the brand his former newspaper had spent so much time and money building was still extremely valuable.

“So we literally took the name, the brand that was built up during my beat reporter’s job at the Evening Press,” Waghorn explained to me. “I’m in year two of this experiment, which started in the summer of 2007, and you kind of look around and say, ‘There’s one of me, a reporter, on every city paper in the U.K., doing my job, following their particular soccer team around the country. Maybe I need to think about a generic model.”

His idea was that rather than beat writers each establishing their own independent sites, they should band together around a common URL and create several sub-publications beneath it. He registered the domain myfootballwriter.com, with the idea of hiring a beat reporter for every single soccer club in the country. Then, once all these beat bloggers are writing about their teams, ad reps could sell both local ads — to businesses located in the same city as a particular team — and national ads for the entire domain. This would also make the site’s content ideal for syndication from news organizations all across the country.

Since launching his own beat writing career, Waghorn has hired a few journalists to cover neighboring soccer clubs. For his city, Norwich, there are 22,000 season ticket holders. His hub receives about 35,000 unique visitors a month and sees about 350,000 page impressions during that same time period. An ad rep from the Evening News who had been made redundant at the same time as Waghorn signed on with him to sell advertising to local businesses.

“He sells display advertising on a pay-by-month basis to local advertisers who used to be the advertisers in the local newspaper who clearly are making the transition from print to web,” he said. “So local advertisers are going to have to make that transition themselves. For the local carpet warehouse who has spent 5,000 bucks building their own website, now the challenge to them is to market their website to their local community.”

competing with the clubs

But over the last few years, Waghorn said, the nature of online sportswriting has changed. He argued that in some ways, the sports teams themselves have become major competitors for media coverage.

“Because you’re now web only, and you’re not beholden to print deadlines, your number one competitor is the football club’s own website,” he explained. “Each and every one of our sports clubs became a publisher, assuming they opened their own website, and because they own the players, the head coach, etc… they own that particular piece of news. For official news, or whatever, nine times out of 10 the official site will be first. So clearly the rules of the game have changed fundamentally the minute the sports clubs opened their own websites. It’s just a matter of realigning ourselves in terms of content and analysis, using your brand and your experience to provide the kind of sticky content that a football fan wants.”

Lately, Waghorn has been reading reports about the struggles of U.S. sportswriters, many of whom are losing their jobs. He said that his theory about a network of beat journalists could probably work in the States as well, and that these reporters should bring their brands together to create a national organization, whether it’s for baseball, hockey, basketball, football, or any other sport. But he warned that because of the changing media distribution and revenue models, these journalists shouldn’t assume they can just continue with the modus operandi they’ve been following for most their careers.

“If you have an elegant structure and you have all the bases covered, what you could do is rather than being a Tuscon reporter who flies to LA one week and New York the next, instead you can just swap your content with your network partner in that city,” he said. “So if you look at the economics of the web and what we could realistically afford to do, can we afford the hotel fees, plane fees, and all those travel expenses? Maybe we should go back to the basics, start afresh with a clean sheet of paper and say, ‘How would we do this if we had to start from scratch?’ And the thing is we do have to start from scratch, go back to square one again.”

In the states, there have been a few instances of online sports networks cropping up. SB Nation, run by Daily Kos founder Markos Moulitsas, has over “200 individual communities, each offering high quality year-round coverage and conversation led by fans who are passionate about their favorite teams, leagues or sports.” And ESPN has launched a series of local sites that act as news aggregates.

Though Waghorn has had some success with his own beat writing, he has yet to bring on a reporter for every soccer club in the U.K., so there’s no way to tell for sure whether a model like his will work. But given that many reporters are finding themselves laid off in a market with a shrinking number of employment opportunities, such a gamble may be their only hope of staying in the game.