Virtual Reality is Growing, But How Can It Make Money? 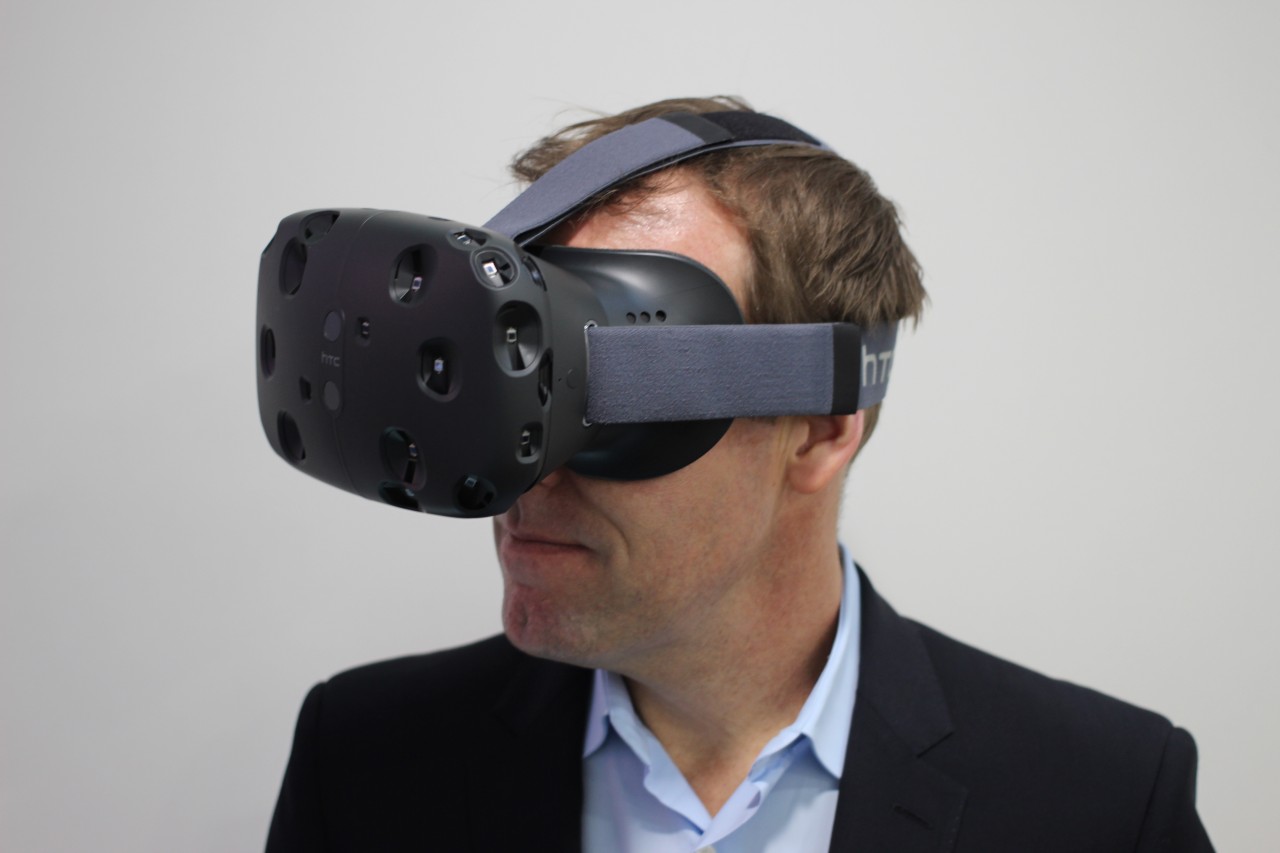 Ryan Holmes, a 24-year-old San Francisco entrepreneur, is confident that he has found a way for earthlings to experience the awesomeness of the universe without ever blasting off into space.

Three years ago, a short film called Overview caught Holmes’ attention. Through interviews with five astronauts, the film describes a phenomenon dubbed Overview Effect, which describes the feeling of awe astronauts get when they see the earth from space. Fascinated by its potential, Holmes was determined to find a way to make the experience accessible for anyone. He found the answer in virtual reality, a technology that allows users to experience computer-generated environments through a headset with a screen mounted in front of the eyes.

Fast-forward. Holmes now runs SpaceVR, a startup that aims to bring space travel to living rooms and dens around the world thanks to a satellite attached to the International Space Station, orbiting 400 km above Earth.

SpaceVR’s camera called Overview One will capture immersive virtual reality video of space-related content, from rocket launches to views of earth from space, which subscribers can access and watch on their headsets and smartphone apps.

“The same exponential growth that came from the computing era is going to happen again in VR,” said Holmes, who raised more than $100,000 in a crowdfunding campaign. “Right now is the best time to build a virtual reality company.”

SpaceVR is one of a torrent of virtual reality, or VR, ventures mushrooming across the globe. (Data analysis firm Quid recently counted 454 virtual reality and augmented reality companies.) Although the market is expected to hit $30 billion by 2020, according to Digi-Capital, the technology is still in its infancy. Despite Holmes’ optimism, one of the big questions is how and when these ventures will start to make money, and which business models are likely to yield the highest returns.

“Monetization is still mostly to be figured out,” said Jamie Pallot, co-founder of Emblematic Group, a production company that has created major VR features for the New York Times, the World Economic Forum and the Tribeca Film Foundation including recreations of events at specific places like the Trayvon Martin shooting.

First explored in science fiction literature in the mid-20th century, virtual reality is expected to become a mainstream technology in the next few years.

Robert Scoble, who covers virtual reality for virtual reality media startup UploadVR, expects many experimental investments before the big payday arrives. “Early efforts won’t be that big because there aren’t enough headsets out there to cover the costs,” Scoble said.

Still, Holmes and others are confident that VR is set for takeoff.

“The market doesn’t need to be huge to be viable as long as it is addressable and well-defined,” said Shawn DuBravac, chief economist at the Consumer Technology Association. He admits, however, that the lack of distribution channels and relatively high price of headsets will temper consumer uptake for a while. Headsets costs between $99 and $799 at the moment.

These are some of the VR business models currently emerging.

Given the dearth of VR content distribution platforms, most consumers are now expected to spend just a few dollars on short and compelling VR one-offs like movies, news, games or interactive tours of landmarks like the Grand Canyon.

“Without established brands, I can’t see consumers paying for subscriptions not knowing what they’re going to get,” Scoble said.

Social media giants like Facebook and companies with gaming platforms such as Washington State-based Steam, which already have big user bases, will likely try to position themselves as major content distribution platforms. Facebook’s Oculus Rift headset hit the market in late March and Steam is due to release the Vive, a co-production with Taiwanese hardware company HTC April 5.

“A big part of monetization will depend on the platform’s distribution power,” Pallot said. “It’s one thing to create the hardware, but you need software and content to reach a wide audience.”

“There’s a big shift from advertisers putting their content on a publisher’s website to branded content,” Pallot said. The New York Times has created six VR films for brands such as car brand Mini and General Electric, which paid about $1.5 million for their inaugural campaigns, CEO Mark Thompson recently announced.

Users spending more time on websites thanks to VR content is good news for the likes of the Times and Facebook, as well as for advertisers, especially with the recent rise of ad blockers and the ineffectiveness of ads. “It’s a very well-defined, highly-engaged kind of audience of early adopters you can monetize better,” DuBravac said.

But a recent Knight Foundation study suggested it is “uncertain” whether news organizations can monetize advertising and brand messaging in virtual reality content. Few VR experiences have attracted advertising so far, according to the study, mainly because of VR’s limited reach.

Ads could come in the form of immersive pre-roll, native VR and advertorial features as well as product placement.

With four headsets coming out this year, one can also expect more “self-guided” campaigns where consumers come across a commercial while watching VR content on their headset at home.

“The average time concert attendees spent with the Google Cardboard was 19 minutes,” Scoble said. “You will see a lot more branded headsets paid for by advertisers handed out for free at events like the Super Bowl or the Olympics.”

Dale Carman, executive creative director of VR content company Groove Jones, said brand activation makes up 40 percent of its revenue. At the South By Southwest tech conference in Austin last month, he created a campaign for McDonald’s, allowing 7,000 people to paint on imaginary walls inside a Happy Meal.

The entertainment industry is taking virtual reality seriously. TV companies and movie studios are not only investing in VR startups, they have also started experimenting with VR internally. Last week saw three major announcements: HBO’s and Discovery Communications’ $300 million investment in 3D graphics startup Otoy, AOL’s acqusition of VR and 360-degree video production company RYOT and Sony’s introduction of a “VR theatre.” Two recent examples from the film industry are Disney’s $66-million investment in content-creation platform JauntVR and the launch of the Twentieth Century Fox Innovation Lab, which wants to make VR its own source of revenue.

“They may get approval to spend $10 million for an interesting movie, but it won’t have the high production value that most movie-goers expect,” he said.

News organizations are expected to see a sizeable return on their investment sooner than movie studios. Similar to sponsored content, the New York Times has emerged as the forerunner among those major journalism outlets making serious investments in VR. So far, the Times’ seven VR films have been streamed more than 1.5 million times on its own app, NYT VR, which has seen more than half a million downloads. According to a Politico article, the Times has made around $8 million with VR up till now, a fraction of the Times’ overall annual digital revenue of $400 million.

“We need to monetize VR well enough just to cover the high production costs,” Emilio Garcia-Ruiz, managing editor of digital for The Washington Post said in the aforementioned Knight study. “No newsroom has the resources to simply add all the slots and equipment needed to start a VR team. Unless we achieve mass scale quickly, which seems unlikely, monetization as a ‘revenue stream’ will be years away.”

Smaller news operations might have to wait longer to produce monetizable VR content because of the substantial time and effort it requires to produce it, according to the Knight study. But it won’t be long before the decreasing cost of 360-degree cameras is starting to level the playing field.

“Low-cost, easy to capture 360-degree videos — that’s the kind of content that will be very popular and easy to monetize,” Scoble said, naming music videos, journalism and immersive theater as examples.

Like many others, SpaceVR founder Holmes said the main challenge to monetizing VR content is the lack of data about consumer preferences.

“You’ll have premium experiences like a movie theater with high-definition headsets. And then there’ll be at-home experiences where you can buy content on iTunes and Netflix or subscribe to services like Hulu,” Holmes said.

Benjamin Bathke is a freelance multimedia journalist and Global Journalism Fellow covering media innovation, technology and startups. Follow him on Twitter and see out more of his work here.

Correction: An earlier version of this story used the wrong first name for Ryan Holmes in the first paragraph.