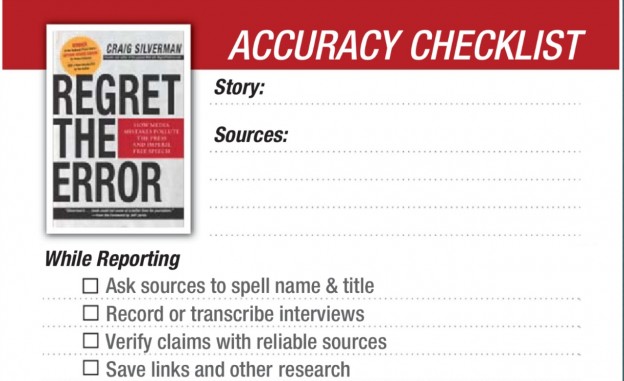 Craig Silverman encourages laminating an accuracy checklist for repeated use.

If a technique were proven to reduce errors, don’t you think journalists, journalism organizations and journalism educators would race to embrace it? To demand that journalists follow it? To teach it in J-schools?

Well, as Craig Silverman has pointed out repeatedly, the checklist is the most effective system of preventing errors, so effective that pilots and surgeons use checklists routinely when they fly and operate. (When I had a recent biopsy, I noticed the surgeon and nurses clearly following checklists as they confirmed the site for the procedure before anesthetizing me, checked my identification bracelet and asked my name and date of birth.)

"Ensuring accuracy is already part of a journalist's workflow, and many of the steps outlined are already followed on most stories; the checklist just makes it more consistent and rigorous."

I was unsuccessful in persuading the Society of Professional Journalists to call for use of checklists in the 2014 update of its Code of Ethics. But I think journalism professors should advocate checklists in teaching basic reporting and journalism ethics. Why should journalists not adopt the best error-prevention system?

I first heard Silverman make the case for checklists in an accuracy workshop he led in 2010. He noted that veteran pilots use checklists. US Airways pilot Chesley Sullenberger, who became so famous we knew him just as “Sully,” used a checklist for his 2009 emergency landing in the Hudson River, Silverman noted. When the discussion shifted from pilots and surgeons to journalists, it started getting uncomfortably familiar. One of the most common sources of error, Silverman said, is the veteran journalist relying on experience.

About the time Silverman had me won over to his checklist point of view, he said something surprising: He has frequently encouraged journalists in workshops and on his blogs to develop their own checklists, but no one had ever told him that they’d done it.

So I developed my own checklist, which includes several items from Silverman’s checklist, but I changed a few items and added others, as he had encouraged. Here’s my checklist, explained in more detail on my personal blog, The Buttry Diary, where I initially published it in 2011:

Correct any errors you found in your archives, databases or other resources you control (but be certain you have verified the new information).

Checklists are worth the time

The most common response when I posted this checklist in 2011 and as I’ve advocated checklists in discussions of journalism ethics standards is that no one has time these days to use a checklist. I don’t buy it. Accuracy is more important in journalism than ever. Wherever we go in developing new business models for news, trust is always central to the value we want to provide. It always has been, and deadline pressure is nothing new to journalism.

Don’t be daunted if my checklist (or Silverman’s or yours or a student’s) looks time-consuming. Some of these checks will take seconds. For most stories, running through a checklist takes only 10 to 15 minutes, if that. You simply work the checks into the workflow of your reporting, writing and fact-checking. The doctors and nurses checking my date of birth took only seconds, but ensured they were operating on the correct patient.

Ensuring accuracy is already part of a journalist’s workflow, and many of the steps outlined are already followed on most stories; the checklist just makes it more consistent and rigorous.

If you’re under deadline pressure, you can check the first few paragraphs and post that, saying the story will be updated. Then check the rest and update. Accuracy is worth a few minutes, because the damage an error causes lasts way longer than the delay a checklist causes.

Two newspapers published errors in stories about me in 1991. I remember those mistakes more than two decades later, and they were preventable. I don’t want people remembering my errors that long.

Steve Buttry is Lamar Family Visiting Scholar at Louisiana State University. He has spent more than 40 years in the news business. He blogs at The Buttry Diary. On Twitter he’s @stevebuttry.

Steve Buttry’s post led to a great conversation on social networks, which we have appended below.

9 responses to “Why Journalism Professors Should Teach Accuracy Checklists”