Evelyn Larrubia is the Editorial Director of the "Investigative News Network":http://investigativenewsnetwork.org/, a consortium of 64 nonprofit newsrooms in North America that produce nonpartisan investigative and public service journalism. She has been a reporter and editor for 20 years, most of it at the Los Angeles Times. Her stories have led to criminal charges and convictions and significant changes to state laws. They have garnered a dozen national journalism awards, including The Scripps Howard National Journalism Award for Investigative Reporting, the Associated Press Managing Editors Public Service Award and the Livingston Award for Young Journalists. While at the Times, Larrubia co-authored a series outlining critical failures by California's guardianship system in protecting the elderly and disabled. She also uncovered self-dealing in Los Angeles' $20-billion school construction program and exposed open meetings law violations by the Los Angeles County Board of Supervisors, among other stories. She has worked as a staff writer for El Nuevo Herald and the Ft. Lauderdale Sun-Sentinel and as associate editor for the Los Angeles Daily Journal. Larrubia spent the 2010-2011 academic year at Stanford University on a John S. Knight Fellowship, looking at funding models for investigative reporting and learning about reader engagement and multi-media production. She can be reached at [email protected] or "@elarrubia":https://twitter.com/elarrubia on Twitter. 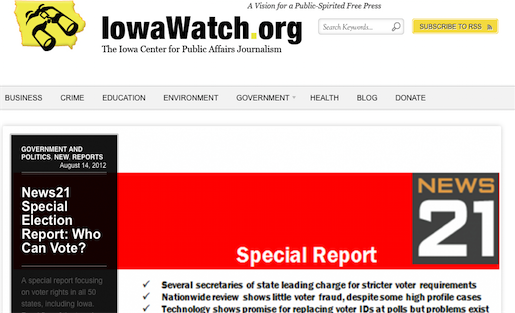