How Educators Can Discuss Journalists’ Coverage of Violence 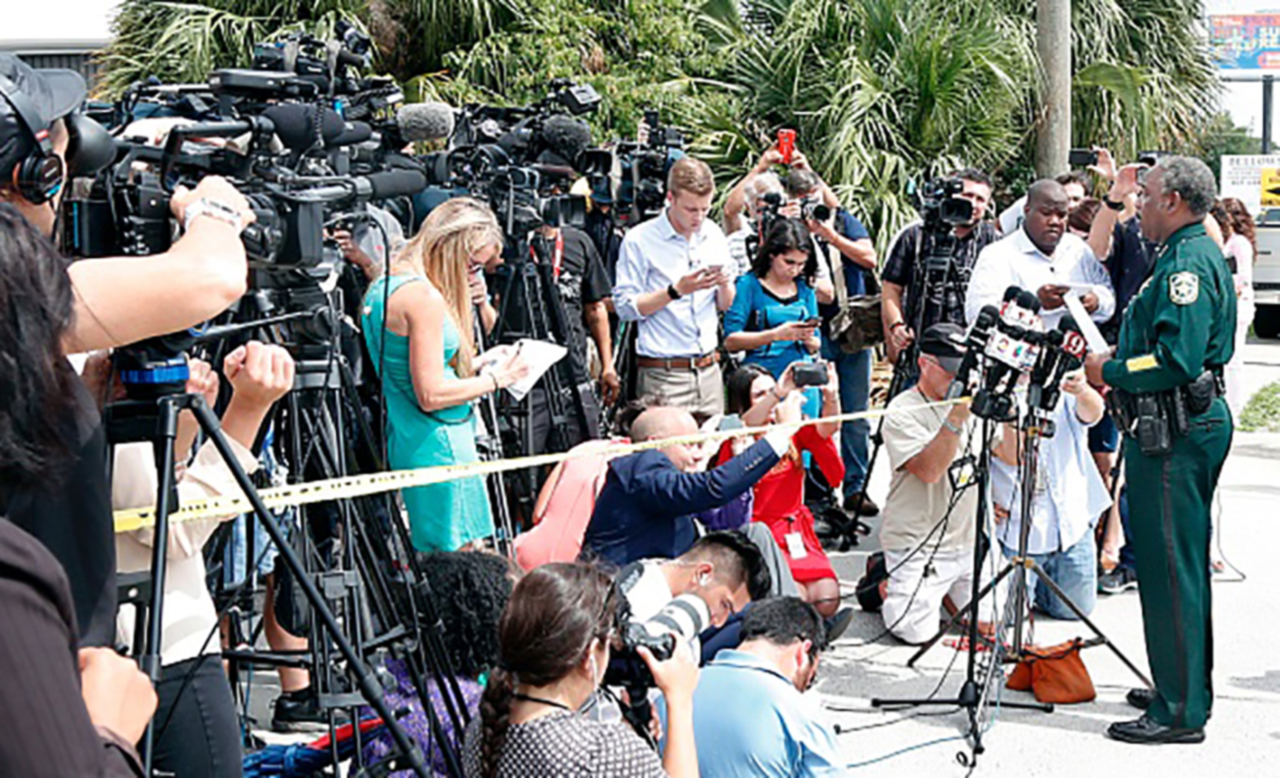 This post originally appeared on the Center for Journalism Ethics site at the University of Wisconsin-Madison.

Another week, another mass shooting in America. In addition to being heartsick, angry and frustrated, I am, as usual, distressed by the way mass shootings are reported in the breaking news cycle. I think of the survivors and the loved ones of victims of Virginia Tech, Sandy Hook, Aurora, the Pulse and all the others, knowing in addition to the pain they’re feeling as they’re forced to relive their own personal horror, they’re watching journalists make the same mistakes over and over.

"What we should be doing is thinking carefully about the language we use in the stories we write and broadcast, especially in headlines and visuals."

First, there is something desperately wrong with the scramble to answer the question “why” by reporting random facts about the killer in the immediate aftermath of a mass shooting. If ever there were a case for “slow journalism,” it is right after some maniac opens fire and kills a bunch of people. It produces some of the most useless, speculative and perhaps even reckless reporting news organizations do.

Here’s what we learned about the killer in Las Vegas in the first 24 hours after the massacre: He owned real estate. He liked to gamble. He was divorced some time ago. He was wealthy. The top contender for most useless tidbit: One source offered the unlikely observation that he didn’t think the killer had ever before fired a weapon.

In previous mass shootings, stories included that the killer had “a funny walk.” Or was recently dumped by his girlfriend. Or had a terrible temper. I can’t count the number of times news organizations have reported with a straight face that the killer “kept to himself.”

Somewhere along the way, the “who” and the “why” are conflated. The random facts satisfy readers’ impotent curiosity for details and probably provide some salve for our unconscious fear that we or someone we love could be the next victim. If we fixate on some aspect of the killer or the situation that is unusual — the telling detail — we can persuade ourselves that there is surely a “type” of person who is capable of doing something like this and, improbably, that we can avoid contact with this type. Or keep this type of person out of our country, if he happens to be Middle Eastern. Or keep this person locked away, if they’ve been described as having a mental illness.

In doing so, we arm ourselves with mental shields against the randomness of deaths by real weapons. They allow us to sleep, to go out in public, to send our kids to college, to go see a movie in a theater or an open-air concert, or to spend an evening at church Bible study. It’s a kind of inversion of the psychological mechanism that causes us to blame the victim. If we can simplify, stereotype, reduce the details into a kind of diagram of propensity, we might be safe.

For the families of the murdered, this kind of reporting stirs particular outrage because it focuses so much energy and attention on the killer. Highlighting his apparent normalcy (“He was the nicest guy in the world”) is a denial of the grim facts these families live with for the rest of their lives: This “average Joe” armed himself to the teeth with the intent to kill as many people as quickly as possible, evaded any suspicion, and then opened fire on a crowd out for an evening of fun and music. Imagine one of those strangers was someone you love.

Another important part of the problem is that this kind of reporting feeds into the 15-minutes-of-fame theory. We make celebrities of killers by reporting endlessly and exhaustively on the minutiae of their lives, plans and “manifestos,” and by publishing humanizing photographs or videos of them. Doing so, we inspire the next killer and the one after that. The bereaved families who launched the “No Notoriety” campaign make this argument persuasively and cite anecdotal evidence that suggests some mass killers have been inspired by those that came before them, especially the two young men who killed 13 people at Columbine High School. Though social scientists are just beginning to study the “contagion effect” of mass shootings, the best evidence to date suggests a slight uptick in mass killings after a major event lasting for up to two weeks. “No Notoriety” makes enough sense to have gained ground with big news organizations like CNN.

People in Las Vegas take part in a vigil honoring victims of a mass shooting targeting concert goers at a country music festival near the Mandalay Bay Hotel on Oct. 2, 2017. (Photo:“VOA Vegas Vigil” by C. Mendoza / VOA is in the Public Domain via Wikimedia Commons)

Some reporting is jaw-dropping in its thoughtlessness. Winner of the “Bottom of the Barrel” award in this category is The New York Times, which published a photograph of the inside of the killer’s hotel room complete with annotations showing the positions of weapons arranged to maximize convenience and destruction. The other graphics in the package explained the logistics. It’s a pretty complete how-to for a copycat, but it doesn’t do anything to further journalism’s central mission to serve the public.

Perhaps, though, there is a why. Law enforcement agencies are responsible for answering that question, with the help of the public. Last week there were numerous stories about investigators seeking anyone with information about what was on the killer’s mind. They waited for his girlfriend to get back from the Philippines, hoping in vain she might shed some light on the why. It could be that some of the information they uncover will help law enforcement agencies and us, the deeply uneasy public, prevent future mass shootings.

But what if there’s only the act and what it signifies: a grandiose act of violent destruction and, usually, self-destruction. There’s a growing theory that mass shootings are a specific act of suicide. Maybe the guy in Las Vegas, whose name is meaningless, just wanted to top the scoreboard with the largest body count. CBS News’ story about the number of dead in the worst mass shootings in modern U.S. history — they’re increasing, by the way — shows a fairly steady uptick in the number of victims. In Las Vegas, the man with the guns killed 58 people (and wounded more than 500 – CBS’ reporting leaves out the number of those left with catastrophic injuries, and that’s a serious omission). The Orlando shooting ended the lives of 49 people.

We’re not helping by referring to the killer as “the shooter.” The term has operational value for police and others during a shooting as they look for the source of gunfire and to bring an end to it. But, now headline writers and reporters have adopted its use, and that’s unfortunate because it carries a tinge of glamor. It euphemizes the results of the person’s acts, which are agonizing and terrible deaths. Calling a mass killer a “shooter” is like calling a shooting victim a “target.” It has the ring of the video game world. It makes me wonder if we’re too desensitized to the true human cost of violence. The proliferation of guns and murder narratives in entertainment media adds to this numbing and is creeping into the way we write about actual violence.

Virginia Tech students read the school newspaper in Blacksburg, Va., in 2007, the year a student killed more than 30 before killing himself. (Photo: MANNIE GARCIA/AFP/Getty Images)

The people who commit these terrible crimes seem to be pretty ordinary guys (yes, guys), and they want attention. And they get it. From us. Reporting on the victims still lags far behind the reporting on the perpetrators of these crimes. It’s out there, and news organizations are committing more resources to memorializing the people who died, as in this piece from the L.A. Times that ran on the paper’s front page on Saturday.

Sadly, it’s unlikely to stop the next one.

How Journalism Should Respond

What we should be doing is thinking carefully about the language we use in the stories we write and broadcast, especially in headlines and visuals. We should be deeply thinking about the purpose of our journalism. If a possible answer to the question why begins to emerge in the weeks after a mass shooting, we should report on it as we continue to follow up on the aftermath for the survivors.

I have a little laminated card on my desk that I hand to my students sometimes when they get lost in a story. On it is a list of questions, and the first one is, “What is the point of my story?” Editors and producers, anchors and reporters, photojournalists and graphic artists should be challenging themselves and their newsrooms to justify the content they’re shoveling onto their sites and into their broadcasts after a mass murder (yes, it was a mass murder, though the killer didn’t stick around to stand trial).

We should be doing what we can to reduce the possibility that we’ve been a party to creating a risk analogous to suicide contagion. Most news organizations have had their consciousness raised about the risks of reporting on suicide as having a single cause, on how exactly people take their lives, and how we characterize them afterward. The World Health Organization offers guidelines on reporting suicide in ways that minimize the risk for contagion. ­­It’s past time we applied similar caution to reporting on mass shootings and the people who do the killing.

Katherine Reed is an associate professor at the Missouri School of Journalism who teaches reporting and a course on covering traumatic events. She is a former fellow of the Dart Center for Journalism and Trauma and has trained educators and investigative reporters on trauma at professional conferences.