Infographics: The Daily Social Media Buzz at the DNC 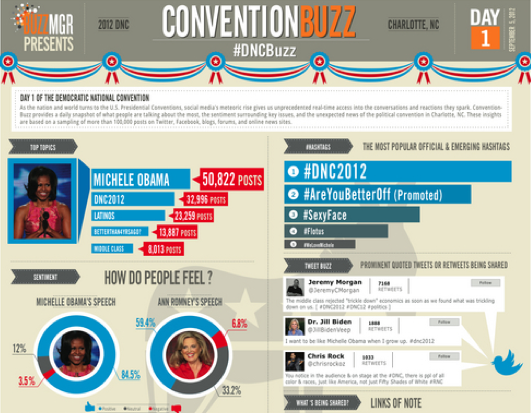 The folks at "BuzzMgr":http://www.buzzmgr.com/, a social media listening tool, have been putting together a daily infographic from the Democratic National Convention in Charlotte to help distill the daily buzz there.

Michele Obama was easily the most popular part of day one at the DNC in Charlotte with 50,822 posts about her on Twitter, Facebook, blogs, forums and news sites."

The ConventionBuzz daily infographics are a snapshot of social media conversations surrounding the key people, issues and events associated with the national political conventions.

Throughout the day, members of our analyst team recommend highly retweeted and most-discussed posts for inclusion in the Tweet Buzz section. To be included in the “What’s An Expert Think?” section, the post either is chosen because of the prominence or expertise of the author or the creativity of the post. Typically, it will refer to one of the key themes of the day.

Kathleen Hessert is a former TV journalist who now runs BuzzManager, Inc and the sports reputation management firm, Sports Media Challenge. Lauded for launching NBA great Shaquille O’Neal on Twitter which helped take the platform to the masses, BuzzManager now provides a range of social media services for a wide range of clients including strategy, execution, education and monitoring via her proprietary BuzzMgr™ listening tool.