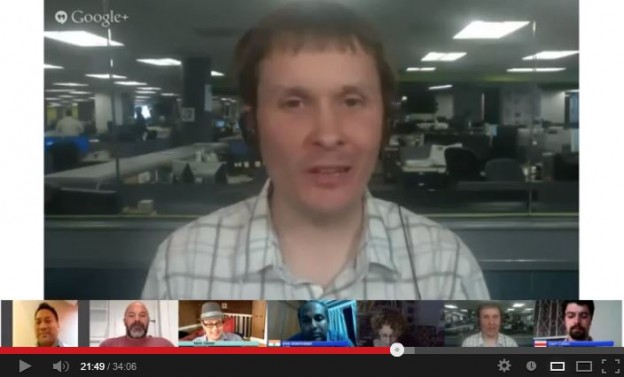 The Washington Post's Tim Lee joins The Mediatwits to talk about his new tech policy blog, The Switch.

When a blogger or journalist furthers their personal brand within a newsroom, who benefits? The New York Times’ Nate Silver is moving his FiveThirtyEight empire to ESPN, the Washington Post is launching a tech policy blog, and the Times quietly killed its Media Decoder blog (which had no guiding personality). Which blogs work for which newsroom? How important is the blog chief’s notoriety to the blog’s success? The Daily Dish’s Andrew Sullivan, social media guru Sree Sreenivasan of the Metropolitan Museum of Art and Tim Lee of the Washington Post will join us for a discussion of big-name blogging’s place in media organizations. MediaShift’s Mark Glaser hosts, along Andrew Lih from American University and former paidContent editor Staci Kramer.

Andrew Sullivan is a blogger, author and political commentator at The Daily Dish, which he founded in the summer of 2000 as one of the very first political blogs. Andrew wrote the blog alone for the first six years, for no pay, apart from two pledge drives. In 2006 he took the blog to Time.com and then to The Atlantic.com, where he was able to employ interns for the first time, to handle the ever-expanding web of content. From 1991 – 1996, he was the editor of The New Republic, bringing its circulation to a record 103,000 and, alongside predecessor Rick Hertzberg, winning three National Magazine Awards in his tenure. He was named editor of the year by Adweek in 1996. From 1996 – 2000 he devoted his time to writing for the New York Times Magazine, a weekly column for The Sunday Times in London, and to the campaign for marriage equality for gay couples.

Sree Sreenivasan is the outgoing chief digital officer of Columbia University and a digital media professor at the Columbia Graduate School of Journalism, his home since 1992. Starting in August 2013, he’ll serve as the Metropolian Museum of Art’s CDO. Sree also writes about social and digital media for CNET. He was part of the founding team of the South Asian Journalists Association and DNAinfo.com (funded by the founder of Ameritrade), a hyperlocal site named one of the six hottest news startups of 2010 by BusinessInsider. Sree has been recognized as a social media guru and journalist of influence by AdAge, Poynter, Newsweek, GQ, the Society of Professional Journalists, Quill Magazine and The Huffington Post.

Tim Lee is a tech policy blogger for The Washington Post. He joined The Post from Ars Technica, where he covered technology policy for the last two years. Before that, he earned a master’s degree in computer science from Princeton. While at Princeton, he was a co-creator of RECAP, a browser extension that helps users liberate documents from the judiciary’s PACER website. Before grad school, Tim wrote about public policy for the Cato Institute.

The New York Times’ famed statistician/journalist is leaving and taking his FiveThirtyEight blog with him. At his new home at ESPN and ABC News, Silver will command a small team of reporters and diversify his current coverage beyond politics and sports, to business, weather and entertainment. Silver joins a host of personal franchise news sites, like Bill Simmons’ Grantland at ESPN, which thrive by finding a niche and blending opinion, fact and analysis. The Times’ public editor notes Silver may have left over personal differences in the newsroom, but almost a year of attempts between ESPN and the Times to poach (or keep) Silver show just how valuable his algorithms and predictions are. That’s especially true after his near-flawless prediction of the 2012 presidential election.

Is this the right move for Silver? Are Jay Rosen and Jack Shafer right in predicting the growth of personal franchise journalists? Where does this put the Times and legacy newsrooms in the age of self-sufficient blogs?

For more news in blogs, the Washington Post is launching “The Switch,” a site dedicated to covering the intersection of technology and politics. It’ll be modeled on Ezra Klein’s Wonkblog, which Switch anchor Timothy B. Lee told Poynter “really found the formula for making Web journalism work.” The Switch, like Wonkblog, plans to make its bread and butter on analysis and recaps. Quartz’s Brian Fung and ThinkProgress’s Andrea Peterson are the blog’s first two hires, with regular contribution from the Post’s tech reporters. Meanwhile, the New York Times has quietly phased out its Media Decoder blog. We’ll talk to Lee about his vision for the blog and how it fits into the current media landscape.

What blogs work for which newsrooms? Is Wonkblog’s formula the way to go for the Washington Post and other newsrooms? Is waving farewell to Media Decoder the right move for the Times?

Cameron cracks down on ‘corroding influence’ of online pornography (The Guardian)