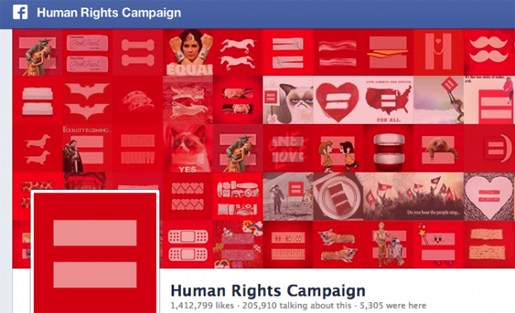 Changing Facebook profile pictures to the marriage equality symbol is an easy way to be politically active online -- but does it lead to offline action?

The level of people’s political participation online in 2012 has increased since 2008 — with 72 percent of all Americans participating in at least one activity, such as posting links to political stories or following elected officials, according to the latest Pew Research Center report on civic engagement. But one thing hasn’t changed: Those with lower incomes and education levels continue to be less politically engaged — both online and off — than those who are more affluent with college or graduate degrees.

Zooming in on the limited participation of this younger, lower-income, less-educated demographic exposes challenges of achieving widespread political engagement in the digital age. So how do we get even more people to participate in civic activities? Think digital literacy and empowering people with better knowledge of the issues at hand.

"When you have news, and there’s nothing you can do, it’s incredibly disempowering." - Ethan Zuckerman

The report says that 63 percent of political social network site users have recently attended a political meeting or worked with fellow citizens to solve a community problem, compared with a national average of 48 percent. Similarly, 60 percent have expressed their opinion about a political or social issue through emails to government officials or signing an online petition, compared with a national average of 34 percent. These numbers suggest that Americans who participate in political activities on social networks are more likely to do so offline as well.

However, 17 percent of political social network site users do not follow this trend, and instead, engage only in political activities on social network sites and not in any other online or offline venues. This subset is younger, less affluent, and less well-educated, and is often accused of “slacktivism” — easy, visible acts of civic engagement with questionable results. This subset was also a big subject in a recent talk by Ethan Zuckerman, director of MIT’s Center for Civic Media. In his lecture titled “A Crisis in Civics?”, Zuckerman shed some light on how to take online social and political activity to the next level, especially empowering those whose sense of civics lives primarily on the social web.

Zuckerman said youth today need to understand how the levers of change extend beyond legislation-making in Congress, to approaches such as influencing authority and public opinion, or employing DIY infrastructures (i.e., the The Trevor Project) and tactics like online petitions and DDoS. When nearly 3 million people changed their Facebook profile picture to the marriage equality symbol, the result was a symbolic power that probably did get the attention of some people who haven’t given marriage equality much thought. However, this effort to influence public opinion is slow and not enough. Zuckerman pointed out the need to provide not just a ladder of engagement online — not just steps to “do things” like changing a profile picture — but also ways to gain more deep and sophisticated knowledge of the social and political issues at hand.

Zuckerman also discussed the online environment after the Boston Marathon bombings (particularly the rush to identify the bombers on Reddit) as a prime example of people wanting to react without the means to do so. According to Zuckerman, the fact that the Red Cross had to stop people from donating blood after the bombings shows how little people know about what to do in a moment of crisis besides giving attention, blood, and money. “When you have news, and there’s nothing you can do, it’s incredibly disempowering,” said Zuckerman, emphasizing the need to develop better channels for people to react to the news through either action or serious discussion.

The Gap in Internet Skills

While class-related gaps in political participation are milder online than offline, the divide still persists. In fact, compared to those with just a high school education or less, those with a college education are significantly more likely to take part in nearly every social network site behavior the report measured, especially activities like commenting on a news story or signing a petition online. This finding beg the question: What exactly are the online skills gained by those with higher incomes and more education today?

Eszter Hargittai, professor of Communication Studies at Northwestern University, researches the relationship between people’s web skills and what they do online. In her research, Hargittai uses a combination of a couple dozen Internet-related terms such as “RSS” and “tagging,” to determine people’s understanding of the Internet. Discussing the findings on class-related gaps in online political activity, Hargittai said in a phone interview, “It’s not just individually what the terms are, but just overall they represent a general awareness of Internet functions and options, and that seems to correlate with people’s propensity to participate.”

In this period of big and rapid changes in technology, digital literacy isn’t about the ability to find news articles and check email anymore. The intricate ecosystem of web apps, mobile apps, cloud-based software, location-based services, and devices of various sizes and operation systems demands not just specific skills as Hargittai suggested, but a sophisticated understanding of how all the different pieces work together. The future of political participation probably depends not on using one device at a singular time to perform one task, but rather on using a fluency across devices and platforms to build large-scale engagement strategies. Here, Hargittai’s ideas of multiple access points and autonomy of use become crucial. But as if addressing digital divides within school environments isn’t challenging enough already, Hargittai brought up another concern:

“We also need to make sure we’re providing support, training, and education not just in school per se, because there are lots of people who are out of the educational system and they also need support.”