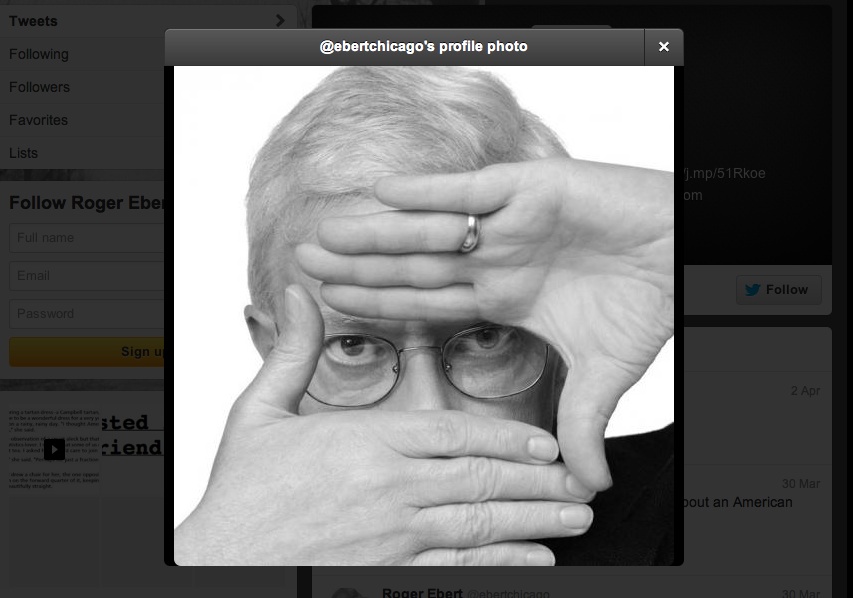 Roger Ebert embraced digital media and had more than 840,000 followers on Twitter, where he was prolific.

Due to a lack of cable access growing up, I only occasionally caught him in syndication during his Thumbs Up/Thumbs Down TV glory days. In fact, I’m pretty sure for a large chunk of my childhood and early adolescence I only knew him via the haughty, hilarious, ever-critiquing Muppets character my parents swore was inspired by him.

In some respects, he died, slowly, online. And yet, the medium kept him simultaneously alive, more intimately connected than ever to so many of us who counted ourselves as fans."

I knew Roger Ebert 2.0. As the keeper of a powerhouse Twitter account and a popular eponymous online “Journal,” Ebert brought candor, originality, wit, and a touch of elegance to the digital medium.

He was, simply put, a mighty Internet presence. He will be missed of course across many media, genres, and parts of the world. Like a majority of Americans, I never met the man, but felt like I knew him. The news of his death yesterday sincerely saddened me.

Why? Because I am a journalist — or at least I play one online. And he was a legendary one — a lion of a newsman and a genuine new media superstar dressed in critic’s clothes.

He showed so many of us the heights to which you can soar in the journalism profession and the digital sphere through sheer work, an incredible appetite for your chosen beat, a spirit of daring and innovation, and a willingness to adapt — to new media and life circumstances that would have left others voiceless or forced them to fade away.

A colleague and friend likes to tell students aspiring to enter the craft that there is one secret to success, above all else: Write. Tons. A lot. All the time.

Like few others to whom I have turned for inspiration, Ebert embodied that advice for me. The man — beyond the Muppet and the myth that came to surround him — pumped out so much original writing, of such high quality, his professional contributions literally fill a bookshelf.

His online archives are now equally prolific. He maintained Roger Ebert’s Journal with gusto, earning numerous awards and citations. He understood the rhythm of the interwebs — the speed and regularity of the posting, the multi-platform presence, and the value of more overt personal anecdotes and introspection.

His take on Twitter perfectly captures his digital understanding. As he wrote in September 2011, “It suits my circumstances. It can occupy way too much time. But there’s something seductive about it: The stream, the flow, the chatter, the sudden bursts of news, the snark, the gossip, time itself tweet-tweet-tweeting away.”

In some respects, he died, slowly, online. And yet, the medium kept him simultaneously alive, more intimately connected than ever to so many of us who counted ourselves as fans.

He openly discussed the details of his declining health, including the procedures and gadgets that kept him somewhat mobile and able to communicate. And he also simply sounded off and had some fun.

As his New York Times obituary notes, “He fired tweets with machine-gun rapidity, on topics both profound and prosaic. He commented on pro football, his captions for The New Yorker cartoon contest, an old pub he once frequented, James Joyce short stories, and untold number of movies and television shows, to which he linked.”

Glory of the Final Redemption

For cinephiles and the general film-going public, the link to Ebert was through movies. My link to him was through journalism. For many others, including some of my family, the link was through cancer — and his refusal to give up amid the many health havocs it wreaked upon him.

He did not retreat from the public eye or give up his work even when he lost his ability to speak. He wrote about it. He kept typing. And at one point through the power of technology, on a special episode of “The Oprah Winfrey Show,” his voice returned.

His bravery genuinely touched me — like so many others.

So did his passion. He built a career atop a love of film — a love so palpable it leapt off print pages, web pages, and television screens.

I often think about a passage from Chris Jones’s 2010 Esquire profile of Ebert. Early in the piece, Jones describes Ebert at work, critiquing a new Spanish-language film.

The scene takes place in a theater: “The lights go down. [The house projectionist] starts the movie … It’s a quirky, complex, beautiful little film, and Ebert loves it. He radiates kid joy. Throughout the screening, he takes excited notes — references to other movies, snatches of dialogue, meditations on [the director’s] symbolism, and his use of the color red. Ebert scribbles constantly, his pen digging into page after page, and then he tears the pages out of his notebook and drops them to the floor around him. Maybe 20 or 30 times, the sound of paper being torn from a spiral rises from the aisle seat in the last row.”

My goodness. It’s like journalism rapture. I aspire every day to produce work with such intensity, laser focus, contextual knowledge, and genuine delight.

I also hope to one day even remotely capture Ebert’s way with words.

I once spent a long weekend in college reading one of his movie review compilation books. The memory even now, years later, makes me smile. There is an ebullience to his reviews that is unequaled by anyone else in his particular line of work — especially when he was through with the introductory set-ups and narrative summaries. When it came time to ponder a film’s deeper meaning or larger value, he bit down hard and often thought big.

I still recall Ebert’s review of “Shawshank Redemption.” Being a living, breathing American male under 40, yes, it’s my favorite film.

In the review’s conclusion, Ebert speaks about the movie, but also offers so much more. The words strike me as especially poignant today: “There is a lot of life and humor in it, and warmth in the friendship that builds up … There is even excitement and suspense, although not when we expect it. But mostly the film is an allegory about holding onto a sense of personal worth, despite everything. If the film is perhaps a little slow in its middle passages, maybe that is part of the idea, too, to give us a sense of the leaden passage of time, before the glory of the final redemption.”

Dan Reimold is an assistant professor of journalism at the University of Tampa. He writes and presents frequently on the campus press and maintains the student journalism industry blog College Media Matters, affiliated with the Associated Collegiate Press. His textbook Journalism of Ideas: Brainstorming, Developing, and Selling Stories in the Digital Age is due out in April by Routledge.