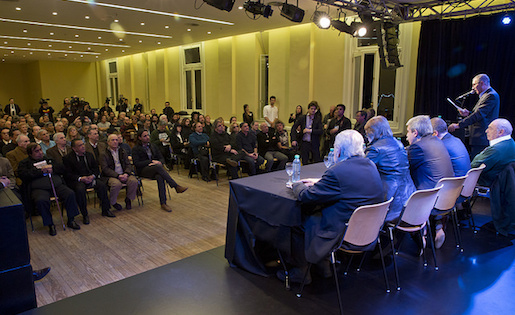 The signing of a cooperation agreement between the Federal Authority of Audiovisual Communication Services ( AFSCA was held at the Cultural Center Kirchner ) and Argentina Association of Interpreters (AADI) , which aims to monitor compliance with the quotas of national and independent music radio and audiovisual media, in Buenos Aires, July 22, 2015. Photo by Augusto Starita for Ministerio de Cultura de la Nación and reused here with Creative Commons license.

The moment polls closed for Argentina’s presidential election on October 25, the C5N cable news station breathlessly reported that ruling party candidate Daniel Scioli had triumphed and would succeed President Cristina Fernández de Kirchner, who is banned by the constitution from running for a third consecutive term.

“Daniel Scioli has won by a wide margin,” announced one of the anchors. “He is Argentina’s new president.”

"But critics claim that the administration manipulated the implementation of the law to create a large group of friendly TV and radio stations and to punish opposition voices such as the Clarín Group, the country's largest media conglomerate."

But C5N, whose owner is reported to have close ties to the Kirchner government, was off base. Scioli garnered 37 percent of the vote, barely topping opposition leader Mauricio Macri, who finished with 34 percent in the six-candidate race, according to the electoral authorities. That has forced a November 22 runoff between Scioli and Macri, and some polls predict that Macri will win.

José Crettaz, a journalist who covers media and technology for the Buenos Aires daily La Nación, called C5N’s election night performance “ridiculous.” But he and other analysts told CPJ that pro-government stations like C5N have proliferated thanks, in part, to Argentina’s broadcast law that was strongly backed by the Kirchners.

Democratizing media — or promoting the government?

Passed in 2009, the Audiovisual Communication Services Law was aimed at curbing monopolies and democratizing ownership and access to radio and television outlets, the Argentine government said. But critics claim that the administration manipulated the implementation of the law to create a large group of friendly TV and radio stations and to punish opposition voices such as the Clarín Group, the country’s largest media conglomerate.

“The heart of the law was to destroy Clarín and promote media groups friendly to the government,” Martín Etchevers, spokesman for the Clarín Group, told CPJ.

Not so, says Fernando Torrillate, a spokesman for the government’s audiovisual regulator known as AFSCA, which was created by the law. He told CPJ the law is a common-sense measure to limit market share and the number of radio and TV licenses that any one company can hold. The law also allocates airspace for indigenous tribes, universities, churches and community associations, and seeks to promote Argentine-made films and television series.

“We have become an example in the region and the world for opening up to new voices and new visions and for having taken on those who concentrated and controlled audiovisual communication for decades,” wrote AFSCA president Martín Sabbatella in a booklet the regulator released to mark the sixth anniversary of the law.

The signing of a cooperation agreement between the Federal Authority of Audiovisual Communication Services (AFSCA was held at the Cultural Center Kirchner) and Argentina Association of Interpreters (AADI), which aims to monitor compliance with the quotas of national and independent music radio and audiovisual media, in Buenos Aires, July 22, 2015. Photo by Augusto Starita for Ministerio de Cultura de la Nación and reused here with Creative Commons license.

Previously, Argentine TV and radio stations operated under a broadcast law decreed by the country’s junta in 1980. Three years later the dictatorship collapsed, but the law remained in place for 29 years. Legislators modified it more than 400 times to adjust to democratic rule and changing technologies.

The push for a new law began in 2008, Crettaz said. At the time, the Kirchner administration was losing popular support, and allies in the media amid a nationwide agricultural strike called to protest new taxes on farm exports. Among those taking a more critical stance was the Clarín Group, which had been largely supportive of Cristina Kirchner, who was first elected in 2007, and her late husband Néstor Kirchner, who served as president from 2003-2007.

The editorial shift stung the Kirchners because the group owns Argentina’s largest daily newspaper, Clarín, a popular broadcast TV station, Channel 13, and the most listened-to radio network, Radio Mitre. It also owns one of the country’s largest cable television operators, and an Internet service provider. Etchevers said growing criticism from Clarín prompted a government propaganda campaign, with officials sporting badges and placards declaring “Clarín Lies!” as well as a push by pro-Kirchner lawmakers to rewrite the rules for TV and radio.

The law was approved in 2009. But implementation was delayed because the Clarín Group challenged the legislation in courts, including a lawsuit claiming it was unconstitutional on the grounds that it impaired freedom of expression. In 2013, Argentina’s Supreme Court upheld the law. As a result, the Clarín Group and about 20 other media groups in Argentina are being forced to reorganize, give up TV and radio licenses, and divest some of their holdings, CPJ research shows.

Media analysts say that so far, the law has had little impact on the Clarín Group, whose media properties maintain their dominant presence and combative editorial line. But they say the law has transformed the airwaves.

In the past six years, AFSCA has granted nearly 1,400 TV and radio licenses or authorizations, including 930 to non-profit groups, according to the official news agency Télam. But most of the non-profit stations depend on state subsidies to survive, while many of the new for-profit privately owned stations have been showered with government advertising, the analysts say. As a result, Crettaz said, they shy away from hard-hitting news reports about the Kirchner administration.

“The government encouraged, through a significant mass of official advertising, the emergence of private media groups aligned with the official information agenda,” wrote Martín Becerra and Guillermo Mastrini, two Argentine academics and experts on media ownership concentration, in a 2014 analysis of the law for the International Association of Media Communication Research. They described it as “a system designed to reward submissiveness and punish criticism.”

“The media law was not designed to promote alternative voices because nearly all of the new media properties have assumed a pro-government line,” said Gustavo González, editorial director and columnist for Perfil, the publisher of Noticias, Argentina’s most influential newsweekly.

Torrillate disagreed. “That’s like saying the sky is red,” he told CPJ. He said that some of the most-watched broadcast and cable news programs belong to the Clarín Group and are extremely critical. He joked that Clarín’s “Todo Noticias” (All News) 24-hour news cable station should be dubbed “Todo Negativo” (All Negative).

As some media owners divest under the media law’s anti-monopoly provisions, people close to the administration have snapped up many of these properties and licenses, Crettaz said. One example is Cristóbal López, who owns a vast network of casinos and, according to news reports, is involved in a Kirchner-owned hotel business in Bariloche. Since the media law took effect, López has purchased several properties — including C5N — which receive large amounts of state advertising and have become far more pro-government, González told CPJ.

As well as its erroneous election-night report proclaiming Scioli the president-elect, C5N reported that Aníbal Fernández, President Cristina Kirchner’s chief of staff and one of her most loyal aides, had been elected governor of the Buenos Aires province. In fact, Fernández lost by a large margin.

C5N’s coverage “is due to personal, political and business ties between its owner and the Kirchner family,” Crettaz told CPJ. “The media law was designed to protect these types of owners and to persecute those who don’t fall into line.”

Calls to Lopez and to C5N seeking comment were not returned.

In its 2013 ruling, the Supreme Court declared that the media law must be applied fairly, that official publicity must be distributed among stations regardless of their editorial line, and that the authority enforcing the law — the AFSCA — must be “a technical and independent organ, protected from undue government or lobby interference.”

But Perfil’s González claims that none of these provisions have been followed. AFSCA president Sabbatella, for example, is a former congressman and Kirchner loyalist, and the regulator is widely viewed as doing the president’s bidding, he said. Last month, AFSCA rejected bids by Perfil and its president, Jorge Fontevecchia, for licenses for two digital TV stations, arguing that the bids failed to include the proper paperwork.

“That is simply a lie,” González told CPJ.

González claimed the bids were rejected because Perfil’s news outlets are critical of the government. AFSCA spokesman Torrillate dismissed these complaints as sour grapes. He also called AFSCA a fair and neutral body and pointed out that its seven-member board contains several government critics.