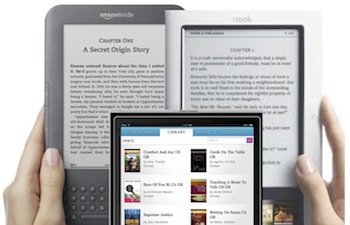 "We trust our customers, and we don't want to hamstring them with the limits of DRM. I think more publishers need to wake up and establish a direct relationship with their customers like we do." -Joe Wikert
ADVERTISEMENT
Click here to read the whole series

Trying to consume an e-book can be an infuriating experience.

Consumers like me want to enjoy the digital version of a book when, where and how we want. We love to be able to read it from multiple screens, search it automatically, share annotations, even have the text read aloud as we drive or do dishes.

In theory that’s the promise of the new world of book publishing. But in practice, we’re blocked at many turns and end up looking for other solutions. For publishers and booksellers, that’s not a good thing, and can even be quite costly.

An Illustration of the Problem

One of my experiences is a fine illustration. Early this year I was sent a review copy of the print version of the book “C-Scape: Navigating the Rapidly Changing Worlds of Media and Business,” written by Larry Kramer, founder and former CEO of Marketwatch and an adjunct professor at The Newhouse School at Syracuse University.

I was traveling a bit at the time and didn’t want to carry the book around. I also like to alternate between reading books and listening to them. So I looked for an electronic version.

That version would also have the added advantages, I thought, of letting me: read it on whatever device I happened to be using, mark up sections and take notes on the device or in the cloud, and even, perhaps, access others’ notations.

I settled on the Google Books version, thinking that because it was from Google, a company that prides itself on openness, I would get the breadth of functions I wanted.

That was not to be the case. The book was provided in the Adobe Digital Editions format, which had digital rights management (DRM) encoding that defeated the ability to highlight text and use text-to-speech conversion software to read it out loud. There was no audiobook version at the time.

I asked Google for a refund of my $14.95, explaining my reasons, which they granted. I then bought the iBooks version, which let my iPad read it to me aloud, but not — as is possible with Kindle editions — take notes that are gathered together in one place I could access elsewhere. Nor could I cut and paste text to make it easier to take notes or put snippets and comments in social media.

IBooks further limited me by only letting its books be read from iOS devices — iPads, iPod Touches or iPhones — not computers, or any non-Apple devices, such as my Windows computers, Kindle or BlackBerry.

Kramer, who is a friend, sympathized when I shared my frustrations, made all the more poignant since a central thesis of “C-Scape” is that consumers today expect to get their media when, where and how they want.

The Hassles of the E-Book Experience

The episode cost Google not only a sale, but also the time spent refunding me. It cost Apple some annoyance from a customer. It cost the publisher good will they could have gotten if they’d made the book available in a more open format.

My hassles were only some of the ones book consumers complain about, often in social media, discussion boards and the web, such as:

There are workarounds. Someone with the right skills and motivation can, for example, strip DRM from a book, convert it to an unprotected PDF, and then access the book on many more devices.

To get media onto a Kindle I have removed the device’s back panel, taken out its memory card, and attached the card to my computer via a converter to transfer the file, then put the card back in. But who wants to suffer that hassle repeatedly?

I do sympathize with publishers and understand the difficulties of negotiating a landscape that is shifting in standards, consumption patterns and business models. Publishers find themselves competing with booksellers that launch their own imprints, and even authors who are self-publishing.

I don’t believe that limiting access is the solution. Frustrated consumers will find a way to get books they want, often in ways that don’t benefit the publisher or the author. I, for example, bought the print version of one book, and wanted to buy it for the Kindle. When it wasn’t available, I found a copy online for free that may have been illicit.

On another occasion, my wife had bought another science fiction series for my daughter, and I wanted to buy the audiobook version, which turned out to be more than twice as expensive as print. It was available from the library, and in searching I stumbled upon a copy someone had uploaded to YouTube.

Some publishers are trying to negotiate the new landscape through openness rather than restrictions. O’Reilly Media, which publishes technology books, lets people who buy from its website consume e-books in any standard, and also get a reduced rate for buying both the print and e-book versions.

“We trust our customers, and we don’t want to hamstring them with the limits of DRM,” Joe Wikert, O’Reilly’s publisher and general manager, told me in an email. “I think more publishers need to wake up and establish a direct relationship with their customers like we do.”

How Openness Can Win

In the mid-1990s, science fiction and fantasy author Ray Bradbury asked a spellbound audience if they could name an information technology system that often needs no electric power, is quite portable, and still functions after water damage.

“The book!” he exclaimed, rhetorically, holding up a print copy of his latest. He was in a school auditorium where I had gone for an article I was writing about him.

While today’s book technologies wouldn’t match up on two of Bradbury’s three counts, they could offer so much more — if only those in control would let them.

I have seen people pay for extra functionality, such as the right to access a book from the cloud or have it in print and e-book or audio form, but resent being asked to pay full price multiple times for the same text.

I believe there is a business model, as O’Reilly has shown. A business model that solves the problems, and delights rather than frustrates customers, could create a profitable business that can thrive for years.