How Publishers Can Bypass Apple with HTML5 Web Apps 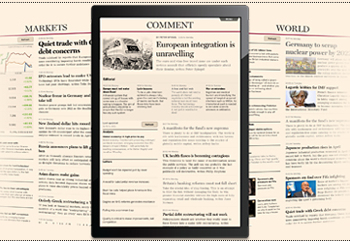 When the iPad first arrived on the scene, our Belgian business newspapers, De Tijd and L’Echo, embraced it. We knew tablets, with their lightness and convenience, would become important for our communities, and so we dove into building apps and offering our readers special deals on iPads.

Quickly though, we learned that despite the opportunities the iPad offered, there were strings attached.

"Updating the app will be easier and faster, and what's also important -- at times that we decide." - Tom Peeters

It wasn’t surprising that Apple wanted a piece of the revenue. But I’m not sure everybody anticipated the possibility that the company would also claim ownership of users’ data — a sensitive issue in the digital media world.

HTML5 to the Rescue

We all started to wonder if the iPad would be just a shiny prison for unfortunate media outfits, all of us forced to offer our precious content through that new channel while having to pay a hefty price. But HTML5 seems to have come to the rescue.

The Financial Times made headlines last week when it launched a web-based application for smartphones and tablet computers written in HTML5 — allowing it to bypass Apple’s App Store and Google’s Android Market, as well as other distributors.

In doing so, the British newspaper is aiming to secure a direct relationship with readers.

For the user, it makes no difference. The FT icon on my iPad looks the same as the native app icons, and the whole experience is very app-like.

The Benefits of Bypassing Apple

So what are the advantages and disadvantages of using HTML5 and bypassing the App Store? I asked my colleague, multimedia manager Tom Peeters of Mediafin, the Belgian publisher of De Tijd and L’Echo, and he explained that as targeted advertising grows, the user data part is a crucial one.

“I think it’s very important for us as a publisher to have full access to the user information … in the App Store it’s totally impossible to have this data,” he said.

In addition, having an HTML5 app would allow Mediafin to keep the 30 percent revenue that goes to Apple every time a sale is made. In fact, taking into account the VAT (value added tax), it’s more like 40 percent.

“Updating the app will be easier and faster, and what’s also important — at times that we decide,” Peeters said.

An App Store app has to be approved by Apple, a procedure that takes time and is fully controlled by Cupertino.

Peeters also expects that it will be easier to tweak the HTML5 apps to optimize them for other platforms such as Android or BlackBerry. However, he admitted the project has its challenges. Here’s an extended interview I conducted with Peeters recently:

So our strategy for now seems to be a hybrid one: maintaining the native app in iTunes while also launching HTML5 apps for the iPad and other tablet devices.

What will your media organization do? Go for the native app or take the HTML5 route?