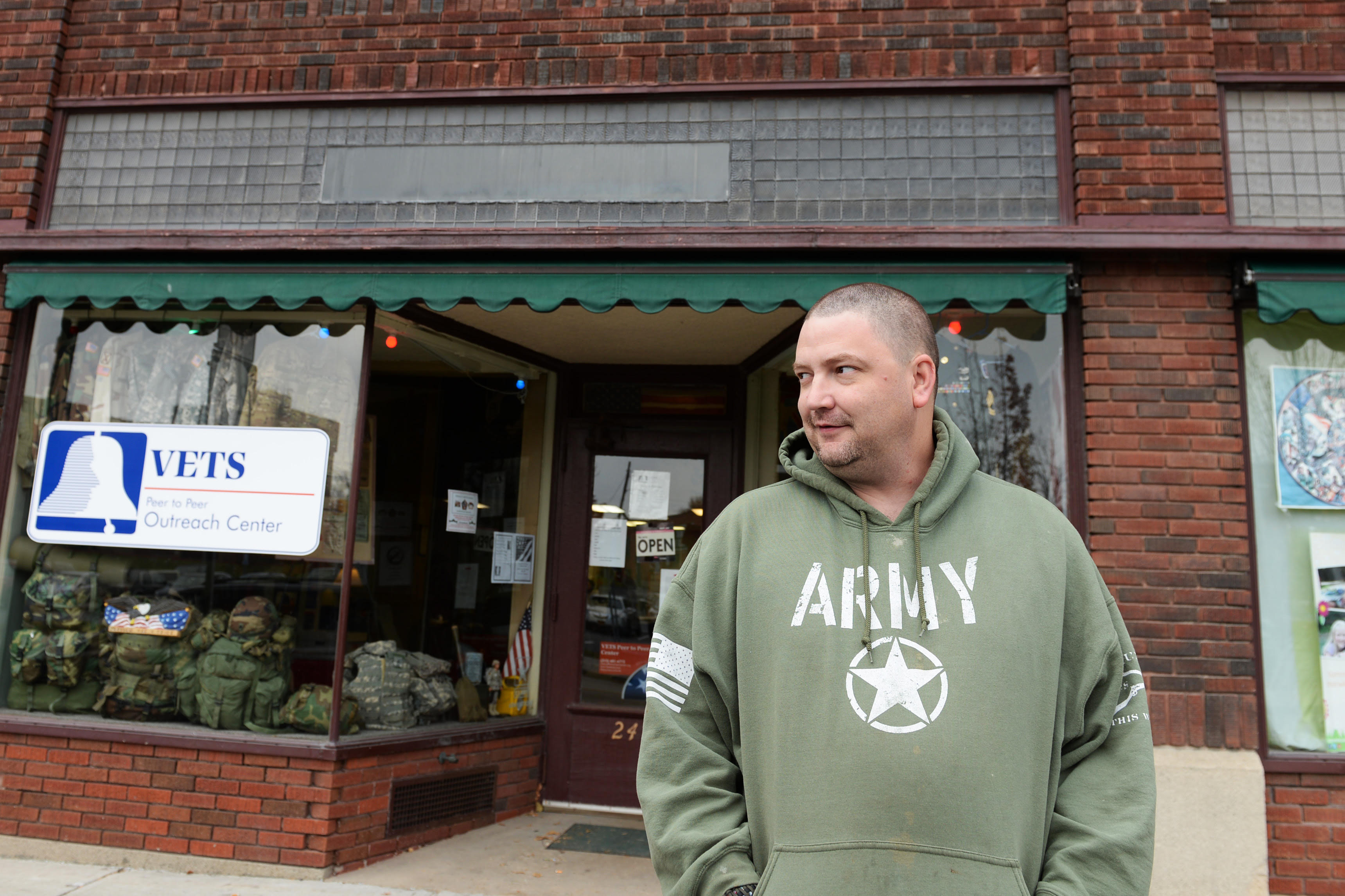 One of the stories in the series will focus on military veterans in Watertown, New York. “We’ll visit VETS Peer to Peer Outreach Center and meet the characters who come and go, and how they shape this world each day and take care of each other,” says Finding America producer Meredith Turk. (Photo courtesy of Turk.)

Over the past year, 15 independent producers from around the country have been learning what it takes to empower local community members to become storytellers.

At a time marked by post-election divisiveness, a handful of the producers will share stories from these community members as part of a new series, “Finding America,” which will air on NPR’s “All Things Considered” and “Weekend Edition.” The six-week-long series is aimed at giving the incoming president and citizens a chance to engage with the stories of everyday people in neighborhoods around the U.S.

The series follows widespread criticism of the media’s election coverage — and it offers up a model for how public media can take a more holistic approach to storytelling in 2017.

It’s a joint effort between NPR and the Association of Independents in Radio (AIR) and builds on AIR’s year-long Localore: Finding America initiative, which paired independent producers with public radio and TV stations nationwide to develop new storytelling models.

Sue Schardt, creator and executive producer of Localore: Finding America, said the series was conceived of more than a year ago and was intended to be “a helpful and constructive gesture” for whomever was elected to the presidency. All of the stories are told by community “hosts” who take listeners on a journey to the “far corners” where they live.

“The nature of a ‘far corner’ implies that it’s not a routine stop along the way,” said Schardt, who is also executive director of AIR. “The only way that we can get there is from someone who knows the back roads, the back alley.”

Distributing stories about these far corners was a natural fit for NPR, according to Mike Oreskes, NPR’s senior vice president of news and editorial director. “The notion of talking to and listening to the entire country this election year has been one our central goals all year,” said Oreskes, who pointed to NPR’s “A Nation Engaged” project as a related example. “We’re constantly looking for different ways ways to listen to and describe what folks in the public are saying and what it’s like in different communities.”

Journalists often approach local storytelling by reporting on a community. The Finding America producers have taken a different approach — by creating stories with and for communities. It’s an important distinction. Instead of wielding power over which stories are told and how they’re told, the producers have brought community members into the decision-making process. As someone who’s helping AIR identify best practices from the producers’ work, I’ve been intrigued by the way they’ve collaborated with communities.

The stories in the Finding America series don’t just feature quotes from community members; they’re told entirely in the community members’ voices. In an act of humility, each of the producers worked behind the scenes, acting as the director and editor of the stories.

“I love how direct non-narrated pieces feel to a listener,” Finding America producer Alex Lewis said. “When they’re done well, I think people really come away feeling like they’ve been introduced to someone in a deeper way than in a reporter was there as an intermediary.” Lewis’ story for the series will feature Randy Jones, a local mechanic who has an encyclopedic knowledge of nearby junkyards, where he finds car parts. Lewis fondly refers to him as “the king of the intersection at 48th and Chester Avenue in West Philadelphia.”

“Listeners will be transported to this intersection in West Philly and given a brief tour of the nearby junkyards,” Lewis said. “Randy will show them what life looks like — one that is full of joy and hard work, but that exists a bit behind the scenes in Philadelphia.” The story is an extension of “Every ZIP,” the community storytelling project that Lewis pursued for WHYY as a Finding America producer.

Another story in the series — by Finding America producer Mona Yeh — will feature a conversation between blogger Carla Saulter and hip-hop artist Gabriel Teodros as they ride the bus together through the Central District of Seattle.

“They have both felt change as the city has transformed through the tech boom,” said Yeh, whose Finding America project “What’s the Flux?” focused on public transportation in Seattle and aired on KBCS in Bellevue, Washington. “Like many of the previous stories I produced for Finding America, this is meant to feel like you are riding the bus next to these people and listening to their conversation about what they see out the window.”

Finding the right people to narrate stories is key, Lewis and Yeh said. They each thought carefully about who their community host should be and did a lot of front-end work to make the storytelling and editing process easier. “I tried as best I could to tell people upfront what style I was going for, and would push for descriptors and narrated explanations of what was going on,” Yeh said. “There were plenty of times throughout the project where, in hindsight, I’d be kicking myself for not asking someone to better describe or contextualize something.”

In addition to Lewis and Yeh, five other Finding America producers are taking part in the series: Jess Mador (who was paired with WUOT in Knoxville, Tennessee, during the production period); Sophia Paliza-Carre (AZPM in Tucson Arizona); Meredith Turk (NCPR in Watertown, New York); Allison Herrera (KOSU in Tulsa, Oklahoma); and Kelly Libby (WVTF in Richmond).

Many of the Finding America producers I spoke with said the people they met in these communities had never tuned into, let alone heard of, their local NPR and PBS stations. This raises questions about their news consumption, sure, but it also raises concerns about whether public media is serving them in the ways that it could and should.

The series is part of Finding America’s ongoing efforts to create public media that does a better job serving people in all parts of the country, from all walks of life. The stories in the series offer up different perspectives on communities that are often defined by single narratives.

“The places we’re going are the places that are most often depicted and subjected to headline-driven journalism about poverty, violence, and injustice,” AIR’s Schardt said. “Where does today’s news journalism leave us? Most often, if we’re honest with each other, it leaves us in a place of despair and hopelessness.”

It’s easy for the media to perpetuate single narratives about a community. It takes courage to go a step further by bringing community members into the storytelling process and allowing new narratives to emerge. Ultimately, these narratives of determination. faith, perseverance and joy have the potential to mobilize and energize people in ways that traditional “doom and gloom” stories can’t.

By illuminating these narratives, AIR and NPR hope the Finding America series will give Trump and citizens a more intimate look at the rich complexity of the communities that make up America.

“I hope that it gives us a feeling of actually being in these various communities — what life is like and what the concerns and desires are in these communities — and that it fits into the larger reporting tapestry that we’re offering people on life in America right now,” Oreskes said. “It’s important for the president and his administration to hear voices from all around the country.”

Mallary Tenore is a freelance writer and the Executive Director of Images & Voices of Hope (ivoh), a media nonprofit. Previously, she was the editor of Poynter.org. You can follow her on Twitter @MallaryTenore.

Editor’s note: AIR’s Localore: Finding America is a national initiative supported by the Corporation for Public Broadcasting, the Wyncote Foundation, the Ford Foundation, the MacArthur Foundation, and the National Endowment for the Arts. Tenore is helping AIR identify best practices and lessons learned from the projects that came out of this initiative.