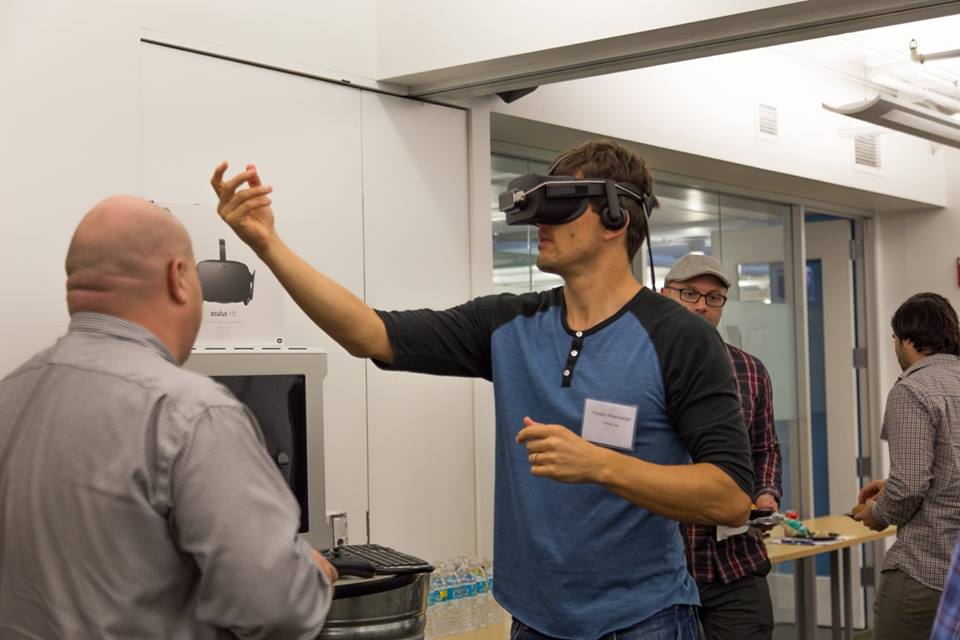 Participants at Collab/Space Chicago 2016 had the opportunity try out VR experiences. Photo by Mel Brunelle.

For this year’s Collab/Space Chicago event, we decided to focus on the emerging technology that everyone is buzzing about: virtual reality. We brought in seven innovative startups and projects from media companies – BuzzFeed 360 Video, CNN’s Courageous, Haptical, InContext Solutions, Nvelop Media, Sightpath and Snips Media – to present their work, identify their biggest challenges and then brainstorm solutions in the afternoon. And of course we used improv comedy techniques, facilitated by Andy Boyle, to help the breakout sessions learn to work better together.

Collab/Space Chicago: The Business of VR, info page at MediaShift

“I would have preferred some more focus on the production side, but that is just my personal perspective. Overall a very good and informative seminar.”

“The event was a great taste of how VR/AR are impacting Chicago businesses. I came with students, so we thought the tech was awesome and it even inspired us to focus a bit more on our math classes. However, most of the companies were having trouble creating buy-in for VR with older people. In that respect, our feedback may not have been very helpful.” -Vinesh Kannan, Illinois Institute of Technology

“Several [startups] were rather half-baked — more of a loose collection of ideas than a business per se.”

“Less of a focus on news than I had expected.”

“I learned so much and was pleased to get a better understanding of VR’s application for journalism. I know there were a few students in attendance but it would’ve been great to have more. Perhaps have attendees introduce themselves, too, and state objective for signing up.” -Sheila Solomon, Rivet Radio