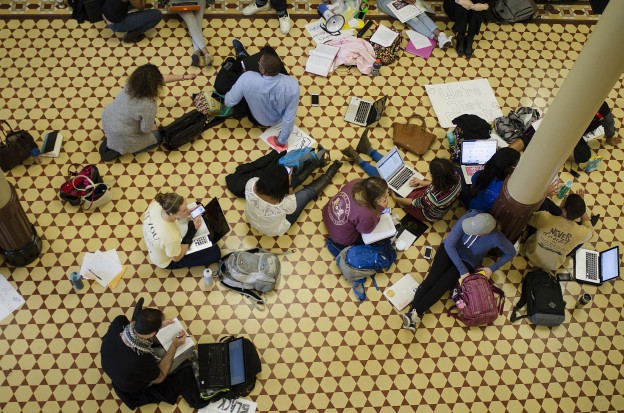 Protestors at the University of Missouri in October 2015. Photo courtesy of Flickr user KOMUNews and used here under Creative Commons license.

As student protests over diversity concerns at the University of Missouri led to the resignation of two top administrators this month, the story drew national attention. Yet the historic nature of the protests dimmed almost as soon as it hit our screens, muted by a controversy over journalists’ access to the protestors’ encampment and the role of faculty and administrators in keeping them out.

It all happened in the home of one of the most widely noted — iconic even — journalism programs in the world. Yet the issues seemed more nuanced that the headlines dominating social media.

EdShift offered a few writers the chance to look through a longer lens on the events last week at Mizzou. What do they draw from what they heard and read and how might that help journalists and journalism educators and students learn and do better?

What Students Need To Understand About Covering Race, by Kath Krueger

Another View: Build Trust so Media Safe Spaces Are Not Necessary, by Sue Robinson

How to Help Students Navigate Distrust and Confrontation, by Denise McGill

The Fallacy of Safe Space on College Campuses, by Shaheen Pasha

#EdShift Chat: Lessons from the Mizzou Protests and Diversity in Journalism, Moderated and Storified by Stacy Forster

A Different Lens on Race, Media and Ethics, by Kathleen Bartzen Culver

There’s a good reason protesters at the University of Missouri didn’t want the media around, Washington Post

One month later, what’s next for University of Missouri protestors, USA Today

Inside the Empathy Machine: VR, Neuroscience, Race and Journalism by Joel Beeson