What Would a Physical Brick-and-Mortar Amazon Store Do? 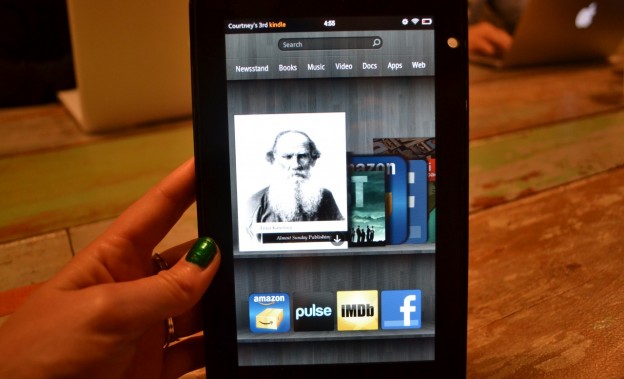 After almost a century in business, electronics stalwart RadioShack has filed for bankruptcy. Their well situated real estate presents an opportunity for one of the companies that put them out of business: Amazon.

Sprint and the hedge fund Standard General agreed to buy 1,500 to 2,400 of RadioShack’s 4,000 company-owned stores in the United States. The current plan is for Sprint to transform 1,750 of the acquired stores into “co-branded Sprint-RadioShack locations” where customers can buy Sprint products and services, and the rest of the store is RadioShack. The primary brand would switch from RadioShack to Sprint.

"It won’t just be about commerce, but a change in the touch points with the consumer."

It is widely believed that Amazon will want some of the remaining stores for their advantageous real estate locations to provide the e-commerce giant with a physical venue for products and services.

If Amazon were to buy RadioShack locations now, or establish a physical presence at some point in the future, what are the likely outcomes and what would we like to see happen?

If Amazon had a physical store, for the consumer it would be about buying more of the same, buying new things and getting it all faster. For Amazon, it would be a real world product and brand venue, and a very big challenge. It won’t just be about commerce, but a change in the touch points with the consumer.

Frequent comparisons are to Apple. Amazon isn’t Apple. Primarily, Apple doesn’t have an e-commerce store which sells everything. Apple has a sui generis niche for development, technology and sales, and had a net profit of $18 billion in its fiscal first quarter. It took Apple years to work out the right retail strategy and even longer to expand into various services. There were many misses along with the hits.

If Amazon expands to have a physical consumer-facing presence, they will be minimally all of the following: the “earth’s biggest selection” store; the new shop on the corner; the new Washington Post; a developer for consumer and business-to-business services; college bookstore partners; third-party sellers; book publisher; printer;  television and film producer; aeronautics developer; grocery store; fulfillment centers owners, and employer of 109,800 full-time and part-time people worldwide. (One can almost see business services splitting off from consumer ventures should Amazon grow too large to sustain itself as a single entity.)

Amazon reported a net loss of $437 million in the third quarter despite a 20% jump in revenue to $20.58 billion. How thin can things get without a retail space offering a significant and fast revenue stream?

We’ve come to expect much from Bezos and team Amazon.  Bezos believes a company has to make “bold bets.”  Would  the Amazon store itself be a bold bet?  Or will it have to be more innovative than selling and in-store pick-up and returns  — neither of which are innovative no matter how they are done.  Amazon lockers for merchandise pickups are in place, but are less than a toe in the retail water. Potential in-store kiosks for ordering from the Amazon site are one step above lockers, but not by much in the land of mobile access. Neither are bold bets.

It’s also unclear if a retail presence could compete with bricks-and-mortar stores such as Staples or Best Buy for pens or electronics. Selecting the right locations will be a critical factor. So, how will Amazon stores add to the company’s bottom line?

If Amazon makes the announcement about a physical presence, here’s our list of what’s expected, as well as what we would like a future Amazon store to offer:

1. Pickups and returns.
Collect your order because you want to do so or to save on the delivery fee. Amazon’s local distribution centers should make it possible for some people to get their goods within a very short period of time or same-day. Will it be cheaper than Staples or Target or Best Buy? You will still have to order it and wait, so Amazon competing with established stores for buying a pad and pen or even a wide range of electronics may not be feasible.

The future Amazon store handles all returns and shipping, saving a trip to the mailing center for some buyers. Returns have the potential to turn the otherwise civilly-trafficked Amazon store into a unpleasant year-round “after Christmas” return rush of unhappy shoppers. And unlike regular bricks-and-mortar stores, there is less chance of an immediate exchange or upsell if the item is a vacuum cleaner or something less glitzy than a Kindle.

2. IRL showcase.
A retail space would provide Amazon with a showcase for their hardware products including the Kindle, Echo, Fire Phone, Fire TV and the others to come, as well as content products including publishing, television and films. Customers can look, touch and make them work, see the latest episodes, read the latest book. The “ahh” and “wow” factors could be significant. Buy on the spot, or come back tomorrow for the custom order. Selling third party products also provides an additional revenue stream.

1. Author readings, book parties and Kindle signings.
The next step in the progression of selling, digitizing, publishing and printing books is the more traditional in-person gatherings for  author readings and book signings. But the Amazon store, fully integrated into social media, could offer both in-person and remote book singings for both famous and self-published authors. Gatherings for fans of genres or themes would expand the idea past  book publication events. Since Amazon has decimated the bricks-and-mortar bookstore, large and small, they have these events (almost) all to themselves, and many customers in the store.

Become a service bureau for 3D printing. Supplying 3D printers to receive instructions sent online by a user, or an outsourced service for ordering 3D goods, to be picked up or delivered when complete. Until the price of 3D printers becomes affordable for consumer and small businesses, and producing output with them becomes easier there will be a increasing need for the service.  Amazon already has an online 3D printing store where customer can order from vendors which supply bobble heads on demand. Assuming there will be a demand for a wide range of products, this service could be significant.
3. Improving customer service.
Getting out into the community with a physical presence creates customer challenges which a virtual store can side-step. Never more so than for Amazon, which does customer service with web site consumers through the narrow channel of pre-formatted  order-related choices rather than telephone or online chat. Multi-channel selling also means new channels of communication which have to be in place.

If Amazon wants a physical presence, they are going to hear kudos and complaints from customers in person. Establishing an efficient customer feedback mechanism (not just narrow-banded e-mail) would be one way to find out what the “something better” is for the customer, which is a Bezos maxim.  New customer  communication channels will always present challenges for any company because it establishes a dialogue which is not fully controlled by the company.

Tell Us What You Would Want

What do you want to be able to get from the Amazon Store of the future? We want to know. Send us your suggestions in the comment section below or to http://mediashift.org/contact and we will  incorporate them into the list.

6 responses to “What Would a Physical Brick-and-Mortar Amazon Store Do?”