Considering Ethics for Anyone Who Commits Acts of Journalism 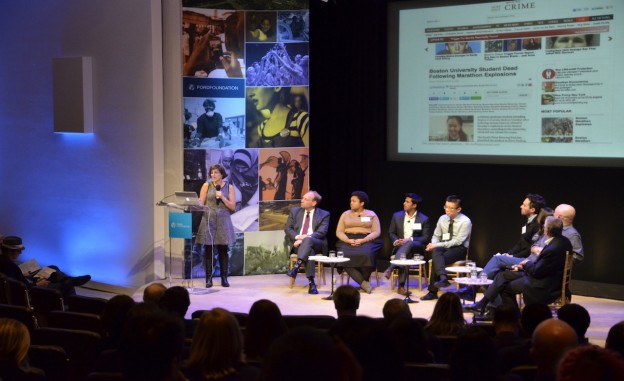 The Truth and Trust in the 21st Century symposium in New York City. Photo courtesy of Tom Cawthon of the Poynter Institute.

Right now there are three major efforts under way to rethink journalism ethics for our changed media landscape. The Online News Association and the Society for Professional Journalists have both launched ethics discussions with their members, and the Poynter Institute recently published a major book on “The New Ethics of Journalism.”

Poynter is using the occasion of the book to jump-start a broader conversation about truth and trust in the 21st century, the first event of which happened this week in New York City. Sponsored by PBS MediaShift, craigconnects, the Ford Foundation, American University’s School of Communication and NewsCred, the event featured a panel of journalists and academics from the New York Times, BuzzFeed, Huffington Post, NYU, AP, and the Seattle Times. There were some great discussions on sponsored content, the nature of truth versus facts, and the intersection of reporting, opinion and activism. But I won’t get into those here. Instead, I want to talk about the one theme that seemed to undergird the entire evening: journalism’s relationship with its community.

"Transparency shouldn’t be just a guideline for our reporting, but for all of the ways our newsrooms function within our communities."

One of the most important points of the evening was made by Mark Glaser of PBS MediaShift in his opening remarks. He said, “These are not ethics for journalists, but ethics for anyone who commits acts of journalism.” And indeed, Kelly McBride and Tom Rosenstiel, the editors of the new Poynter book, have worked hard to think about an ethical framework that can be relevant and meaningful to the wide array of people who are participating in journalism today.

Rosenstiel echoed this point later in the evening when he argued that today ethics has to be embedded in every piece of journalism, not just a set of values ascribed to by a newsroom or organization. The way content spreads online means that journalism is often disconnected from its source so we can’t rely on brands to establish trust with the reader. Audiences need to see, within the journalism itself, why this piece is worthy of trust and how it reflects ethical reporting. This is why Rosenstiel and McBride put more emphasis in their new book on transparency over independence, a decision which itself has sparked some useful debate.

Building Trust is a Negotiation with Community

Monica Guzman, of GeekWire and the Seattle Times, also discussed how the need to reassess our ethics is driven by changing roles and relationships between audiences and journalists. As an example, she talked about following the Boston Marathon bombing coverage and seeing the community ask tough questions of journalists. Around key moments, she saw community members asking journalists, “are you sure?” and “what’s your source?” Vivian Schiller of NBC News agreed that “social media is teaching citizens to ask journalists the right questions.”

This resonates with what I heard in the room during a workshop earlier this summer, organized by the Online News Association and supported by the McCormick Foundation, in which journalists and social media staff heard from Boston community members about their experience of social media and journalism during and after the bombing. Community members were deeply skeptical of nearly everything they saw, and felt empowered to ask tough questions back to reporters. Most reported that in moments of crisis they relied on existing relationships with people or news organizations they already knew and trusted, whether that was a local public radio station or a satirical Tumblr blog that put aside humor to provide news and info to their community.

Clay Shirky thinks that people are adopting journalistic skills and skepticism because they have to. At one time, trust came from a sense of authority rooted in scarcity, but today that trust has to be negotiated in new ways. “The man with one newspaper knows what the news is,” said Shirky. “The man with two is never sure.” Today, we should think about the news like we think about the weather, Shirky said. “It always comes with a probability attached.” The abundance of news and information is cultivating a more sophisticated audience that wants to not only understand the news but also the process behind the news.

Transparency is in itself not enough — our audiences are increasingly also looking for accountability.

“Our biggest opportunity,” Guzman said, “is that every new voice, every news organization, must earn trust.”

It is a constant negotiation, a relationship in flux. It is always unfinished.

Tom Rosenstiel reframed this tension between abundance and scarcity in the words of two longtime press scholars, Lee Bollinger and Vartan Gregorian. In a follow-up email after the event, Rosenstiel put it this way:

“Lee Bollinger has made the point that the Supreme Court in its First Amendment decisions has reinforced one idea above all others — that from a diversity of views and sources we are more likely to get at the truth. But Vartan Gregorian has on many occasions made the point that when information is in greater supply, knowledge is harder to create — because we have to sift through more detail and have more dissonance.”

In Rosenstiel’s view, we face a gap in journalism today between having “the ingredients for a more accurate understanding of events and civic affairs” and “living up to that potential.” Bridging that gap is hard work and doesn’t come easily. But we are starting to understand what that work looks like.

We Need an Ethics of Engagement

The three pillars of Poynter’s new ethics are truth, transparency and community. It is notable that community plays such a prominent role. However, in the conversation last week, community was more of an undercurrent than a focus. There is still much to grapple with in terms of the evolving ethics of participatory journalism, collaboration with community and building in-depth reciprocal relationships with stakeholders outside the newsroom.

Poynter is planning another event to continue this discussion and has created a place on their website to facilitate further debate. As the conversation here — and at the Online News Association and Society of Professional Journalists — continues I hope there will be more room to talk with the community, and not just about them. As this discussion illustrated, our communities are hungry for this conversation and our newsrooms are well positioned to help facilitate a more open dialogue about journalism ethics for all acts of journalism.

Transparency shouldn’t be just a guideline for our reporting, but for all of the ways our newsrooms function within our communities. We need to welcome our communities into the process of journalism but also into our debates about ethics, accountability and impact.

As more people participate in journalism as contributors, creators and distributors, they are looking for meaningful resources and ways to join this debate. After the Boston Marathon bombing I did a series of panels and talks about social media, breaking news and verification. Over and over again, community members and citizen journalists asked me for guidebooks, resources and curriculum that are designed for them, that spoke to the issues and questions they were grappling with.

Groups like New Jersey’s Citizens Campaign and projects like Dan Gillmor’s Mediactive are trying to create these kinds of resources. But we could be doing much more to partner with local organizations to support this kind of active and engaged news literacy that helps our communities and our nation build capacity around a new networked fourth estate with ethics for all.

Why Journalism Needs to ‘Do’ Ethics, Not Focus on Defining Journalists, by Stephen Ward

Let’s Stop Defining Who Is a Journalist, and Protect All Acts of Journalism, by Josh Stearns

All photos from Truth and Trust event by Tom Cawthon of Poynter, and used with permission.