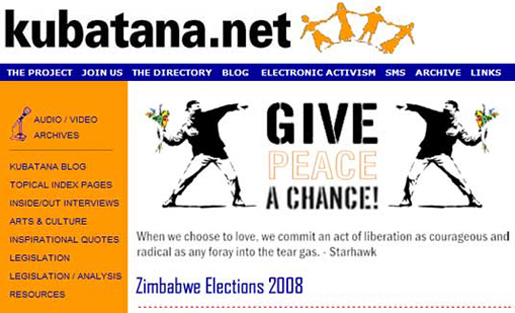 In my previous post, I argued that established, traditional newsrooms tend to be most comfortable accepting citizen reporting or user-generated content during a large-scale, widespread emergency event. In these circumstances, newsrooms often accept photo and video submissions from the public, or even seek them out on Instagram, Vine or Twitter. Professional journalists or editors may curate tweets or blog posts to summarize the experience of citizens. They may also make a public request for input from those affected, or to clarify incoming information.

This input is incredibly valuable during a crisis. Citizen reports provide context and nuance, as well as a broader and more inclusive range of voices than mainstream commentators and information sources. In some cases, citizen reporters can emphasize issues that public officials have downplayed or overlooked.

Traditional newsrooms rarely create an environment that fosters this level of interaction outside of major emergencies. In my last post, I outlined a few of the reasons I suspect this happens. Here, I’d like to focus on ways a newsroom might be able to cultivate more frequent interaction with citizens.

Arguably, all journalism deals with crisis, whether individual or shared, personal or a wide-scale emergency. Crisis drives a compelling narrative, and narrative is the standard way in which journalists frame information.

Here is one example: In 2009, The Huffington Post tried an experiment in which journalists were trying to learn how insurance companies decide which claims to approve or deny. They asked people to write in and describe their experiences. The journalists then curated some of the most interesting stories. The intent, in their words, was to share “many individual tales that taken together may illustrate some of the gaps and weaknesses in the current health care system.” The results suggest people are sometimes denied coverage based on mental illness — even if that illness was temporary and well into a patient’s past. Others noted significant delays in approvals for cancer tests and treatments. To me, the project illustrates some of the great strengths of citizen reporting. It also demonstrates the value professional reporters bring to the mix, as editors, analysts and curators.

And we’ve only scratched the surface of what citizens can provide in terms of data collection. What if citizens sent a text message to a dedicated phone number every time they had to talk to their insurers because a doctor’s report wasn’t completed correctly? Or when patients were repeatedly denied benefits they understood to be a part of their health care plan? Aggregated, data like this could illuminate coverage gaps, perhaps by location, health care sector, or service provider. As newsrooms increasingly focus on data collection, input from citizens may provide a bellwether for concerning trends.

If traditional newsrooms were looking to more fully explore the possibility of regularly engaging with their audience, here are some factors I think they would need to consider.

2. Ask through what channels can people best contribute?

I wrote before that people naturally will gravitate to whatever platform they are most comfortable using. This can pose a challenge to newsrooms, as popular platforms change or evolve, as do the digital rights to using content from those platforms. Further, journalists and editors will likely have to seek out channels, rather than providing citizens with a siloed area of participation. Newsrooms need to acknowledge that asking people to learn a new platform is a big hurdle. Asking people to report via SMS, Twitter, Facebook, or other common platforms will likely generate more useful participation than an in-house comments platform, for example. Journalists and editors should engage with people on the sites and services they are already using. The Economist recently addressed the issue in a video blog post; Alexandra Suich, media editor, notes, “People will spend their time looking for [content] on YouTube, so why not actually provide it on your news site?”

This is related to my first point. Different people will have different preferences. Some are happy to leave comments on a web story; others want the relative privacy of SMS or e-mail. Still others may use Twitter or a number of photo-sharing sites like Instagram or Flickr. So newsrooms need to think through what information is most helpful, and then which platform(s) are most likely to encourage audiences to share that information. If you only need photos, find multiple photo-sharing sites, and also allow people to upload or email photos. If you need short bursts of information or data, Twitter and SMS are great platforms. If you are working in an area where broadband access is a challenge, like a huge swath of New Orleans, then you may be limited to voice calls and SMS only.

4. People will participate if there’s no other way to be heard

As it turns out, people will participate — and in large volumes — if they feel they don’t have an opportunity to weigh in on a topic elsewhere. In fact, they will often bring a surprising amount of creativity and thought. And speaking of New Orleans, here’s a great project from Ted Fellow Candy Chang that illustrates my point. And, more relevant to my work at FrontlineSMS, the Kubatana Trust of Zimbabwe has explored this issue repeatedly in their efforts to make human rights and civic education more accessible. You can read about their use of FrontlineSMS to mobilize and inform citizens during and after the 2008 Zimbabwean election process on our own blog. Basically, if you think you’re working on an issue where people don’t have another avenue to participate in dialogue, think about opening up those channels in the newsroom. The U.S. health care system and veteran benefits issues are classic examples.

One of my favorite examples of citizen reporting involves “Ice Stories: Dispatches from Polar Scientists,” part of the 2007-2009 International Polar Year project. Run by the Exploratorium science museum in San Francisco, “Ice Stories” featured a select set of scientists reporting on their work — as well as changes they’ve noticed — in the Arctic and Antarctic. The scientists received multimedia training from PBS, NPR, and the San Francisco Chronicle. In this case, a specific set of scientists were contributing their expertise on an issue they felt passionate about.

The argument for using “bounded networks” is different than a general call to the public, in part because it would require a fairly long-term commitment for a specific group of people, as well as a relationship with a newsroom or other entity, to propel any given project forward. With a bounded network, you are reaching out to a specific network of people and asking them to weigh in on a particular topic.

Other models for creating bounded networks are emerging. Jay Rosen recently announced on his PressThink blog that NYU’s Studio 20 program would partner with Quartz to see if they can rapidly set up networks as trending, newsworthy topics, or “obsessions,” emerge. Among other ideas, he proposes that over time, newsrooms can “engage key contributors in co-production, similar to the moment when a successful blog becomes a group blog by hiring from the comments.” In a more traditional newsroom setting, a bounded network might manifest itself as a curated guest blog running alongside a beat, repeat expert panelists probing different approaches to a specific problem, or calls for citizens who dabble in sensor networks to collect specific kinds of data, like WNYC’s recent Cicada Tracker project.

One of the many things I like about CNN’s iReport site is that they give readers assignments. This helps frame the discussion and will generally give newsrooms more of the type of stories they need to round out their coverage. The request should be as specific as possible. “Tell us your story about poor health care” is a different kind of request than, “Have you or a relative been denied benefits by a national service provider? Tell us your story!” ProPublica recently adopted this approach in an appeal to readers to contribute to an investigative piece on internships.

7. Take the time to draw conclusions

Highlighting good content will encourage contributors who create that content. It also sends a signal to others what kinds of information is most helpful. Also, aggregating information — whether it’s semi-structured data or your assessment of a lot of narrative work — is a valuable asset and critical to making sense of information on cluttered channels like Twitter.

These are a handful of ideas about how to continually engage citizens in ongoing news discussions. I think there are other issues at play, however, that will encourage newsrooms to increasingly adopt this approach.

In a third and final post related to this topic, I’m going to lay out a few emerging trends in mid- and small-size news outlets worldwide that will likely promote the emergence of a more integrated, participatory news culture.

One response to “7 Ways Newsrooms Can Boost Citizen Reporting”