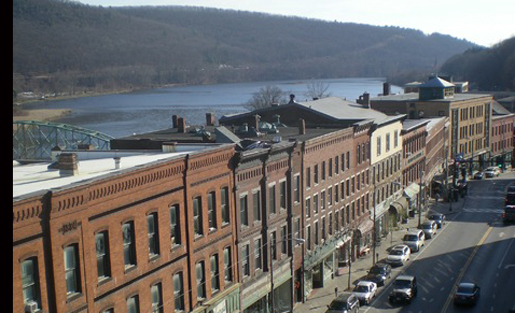 Ten years ago, when we started iBrattleboro.com as a community news source “by, for, and about Brattleboro, Vermont,” we thought it was important to hear from the people themselves and not just government and media.

"Little did we know that iBrattleboro was blazing a trail in what would later be called 'citizen journalism,' an upstart phenomenon that has had surprising effects on the way news is covered and made."

Media consolidation was rampant in 2003, and we worried that there would be no counterbalance to big media’s seeming stranglehold on news and opinion. Little did we know that iBrattleboro was blazing a trail in what would later be called “citizen journalism,” an upstart phenomenon that has had surprising effects on the way news is covered and even on the way it is made.

News From The Bottom Up

These two flyers were what we used to announce the site in 2003. We made copies and put them around town. Looking back, almost all those words came true about the site.

At the time we launched iBrattleboro, newspaper websites were one-way streets — reporters wrote the news and their readers read it. Only a very few sites allowed much in the way of reader interaction, with the Washington Post’s online chats a notable exception. Moreover, there was little in the way of social media, with Facebook and Twitter still years away.

iBrattleboro started out of the box with reader submissions, and actively encouraged people to write their own news. Despite ominous warnings from some in the community about the dangers of letting people speak for themselves, many others rose to the challenge, posting stories, opinions, news items, poems and more.

Stories that had previously been given short-shrift in professional media got full airings on iBrattleboro, including the union drive at the local newspaper (which for obvious reasons, they did not want to cover themselves) to the controversial sale of a local cooperative restaurant to a religious organization. A local pirate radio station became another big iBrattleboro story when the Federal Communications Commission shut them down. Because stories were bubbling up out of the community, iBrattleboro.com often got them first; many would be covered later in professional media once they saw from the comments that the story was interesting to people.

iBrattleboro.com became the place to report news regarded as too flaky for the newspaper to devote space too — UFO stagings, for instance, or Chris Erickson’s concerns about smart meters in Vermont. iBrattleboro.com is the only news outlet with full coverage of the bimonthly Selectboard meetings, which often run at 2,500 words or more, and yet remain the most read and discussed stories on the site. And then there were the disaster stories — the Wilder Fire, Hurricane Irene, the Brooks House Fire, and others — which garnered enormous interest and numerous comments.

The Importance of Comments

A word about comments: far from being mere side-chatter, comments often amplify our readers’ understanding of a story as people add pertinent information and opinions. Without comments, the story provocatively entitled “Does Anyone Know Anything About The Dead Body?” would have remained nothing more than a vague, unfounded report. As it is, we learned that, indeed, someone had died and their body had been found on Flat Street.

We learned the extent of downtown crime from a story about muggings downtown and subsequent reader comments. We became much more aware of local issues that were still in the planning stages such as Pay As You Throw, an initiative to make residents pay by the bag for their trash removal. Pay As You Throw was later defeated by citizens who fought for and won the right to be allowed to vote on it, after a lot of organizing on iBrattleboro and elsewhere (and a brief skirmish in the courts).

Despite the importance of comments on iBrattleboro, we’ve resisted efforts to label the site a blog, or worse, “a chat room.” The emphasis on iBrattleboro has always been reporting and discussing the news, whether it’s a major bond issue affecting the tax rate or a lost cat on Oak Street. Because local people are reporting the news themselves, topics tend toward things people feel strongly about, making the site a good barometer of public interest. Today, iBrattleboro has became the go-to place to gauge public opinion on hot topics or to find under-the-radar news stories not covered elsewhere.

Our citizen-driven model has proven to be popular and the number of registered contributors has risen steadily from 200 in the first year to more than 2,000 today. Many more guest users visit the site each day. iBrattleboro.com averages more than 30,000 unique visitors a month in a town of 12,000. As one local businessman told us, “People have to read iBrattleboro whether they want to or not.” In short, if you don’t read it, you might miss something important, and no one, certainly not local politicians, officials, and businesspeople, want to be out of the loop.

Attitudes of those in the media toward the phenomenon of citizen journalism have undergone an interesting evolution over the years. When we talked about it at the Online News Association conference in 2005, we felt like we were the novelty act — cute and unthreatening. A few years later, attitudes had changed in the news industry and journalists seemed openly hostile, as if citizen journalism was somehow responsible for the ongoing troubles in the news industry. Even White House correspondent Helen Thomas dissed citizen journalism in her keynote speech at a 2006 journalism conference we attended. To be fair, she didn’t have very nice things to say about professional journalism either. Nevertheless, we knew the honeymoon was over.

Despite this early antipathy, most news outlets today have incorporated elements of citizen journalism into their own news presentations, allowing comments on stories, facilitating submissions, or at the very least, posting user photos and video. Media has come a long way from the one-way news process that existed before all these upstart citizens started jumping into the game.

Citizen journalism remains controversial however, right down to the name. The criticism from professional journalists has typically been that non-professionals cannot be journalists because they don’t write according to journalistic standards, they aren’t edited, and there is no official fact-checking system. Hearing these complaints at the Online News Association’s annual conference in 2005, we felt obligated to note that iBrattleboro had never “misled a nation into war,” as the New York Times was accused of doing with the Judith Miller stories. Moreover, our perceived lack of journalistic standards did not seem to hamper the communication of information on iBrattleboro; on the contrary, people seemed to like the stylistic diversity of stories published there.

Regardless of these quibbles about definitions and practices, we continue to feel an affinity with the term citizen journalism as opposed to other possible labels. For us, citizen journalism evokes the democratic spirit we have always tried to foster, starting with the site’s original tagline: “news of, by, and for Brattleboro.” Citizen journalism is an attempt to get at the real purpose of news — to educate people so they can better participate in our democracy. A big part of that education has to do with knowing what other people think about issues, without which, it’s difficult to organize, advocate, act, or even vote effectively.

Professional media is brilliant at covering the views of politicians, government officials, pundits, generals, celebrities, and members of think tanks. Citizen media succeeds by bringing us the views of ordinary people. In a free and democratic society, we believe it’s essential to have both.

1. People really want to contribute to the public dialogue and to the flow of information in general. When they do, everyone learns and everyone gains. The more diverse the cross-section of contributors, the more valuable the dialogue becomes as a way to think through an issue or make a decision about it.

2. If you want to get something to happen with regard to a particular issue, write a story about it. People will take notice and things will happen. Or put another way, even the most hyper-local story or comment can have far-reaching effects.

3. Issues drive use. When a big issue is under discussion, people interested in that issue will register so they can post stories and comments. Many of those new users will stick around and discuss other issues too.

4. Sometimes, the best writing is in the comments. That said, some people will never write and that’s fine too. The 80-20 rule seems to hold, where 20 percent do the writing and 80 percent never write.

5. It’s OK to have fun. If it’s Friday night and everyone wants to talk about UFOs, so be it.

7. Keeping up with a busy citizen journalism site can be a lot of work and you will be expected to stay on top of things every day, weekends and holidays included.

8. Sometimes people wlll say “you should cover this” and you have to remind them that citizen journalism means getting to cover it themselves…

9. Citizen journalism boosts professional news outlets by providing them with tips and sources and by provoking healthy competition that leads to more and better news coverage. Other news outlets may not always regard said competition as “healthy.”

10. With citizen journalism, you don’t have to wonder if you’re the only person thinking something. You know what people are thinking and chances are, other people share your views.

What works in our town may not work in a city or suburb somewhere else, and we’ve never sought to franchise what we do. Hyper-local means just that — it has to grow from the personality of the area and the people who live there. We live in, love, and are best able to discuss Brattleboro, Vermont, and the issues that affect it.

Lise LePage is president of MuseArts and co-founder of iBrattleboro. She is a web programmer and developer with over 30 years experience in project and team management in the fields of financial services, education, and new media. Tish Grier named her one of the “The 10 Women Who Are Saving Local News.”

Christopher Grotke is creative director for MuseArts and co-founder of iBrattleboro. He has worked since 1986 as an artist, exhibit designer and media educator. His work for museums has been featured in WIRED magazine, The Boston Globe, The Washington Post, The New York Times, and on such television programs as PBS’s “The Creative Spirit,” and “The 90’s.”