Pew Survey Shows How E-Books Are Changing the Equation for Publishers, Readers 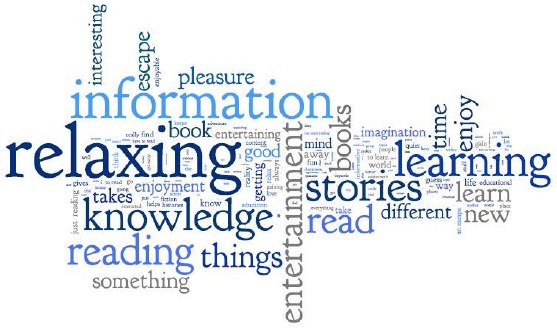 When asked by Pew what they liked most about reading, those who had read a book in the past 12 months gave a host of reasons (see word cloud, above). Image courtesy of Pew Research Center's Internet & American Life Project.

More Americans are reading e-books than ever, according to a new study by the Pew Research Center’s Internet & American Life Project.

The most impressive stat from the study is that 21 percent of adults had read an e-book in the past year, but adults are still more likely to read a printed book. Seventy-two percent of adults (age 16 or older) turn the pages the old-fashioned way.

What the study really sheds light on is how quickly our relationship with reading is changing in the digital age."

However, the reach of e-books is growing, increasing from 17 percent of adults before the 2011 holiday season, during which thousands of e-reading devices appeared under Christmas trees, to 21 percent immediately after. The poll, funded by the Bill & Melinda Gates Foundation, captured Americans’ attitudes toward reading and digital reading in mid-December 2011 and January 2012.

The data showing that e-books are on the rise will not surprise anyone who’s been paying attention to the rapid adoption of e-readers. But what the study really sheds light on is how quickly our relationship with reading is changing in the digital age.

Reading is still in decline, but not by much

According to the study, 22 percent of Americans said they hadn’t read a book in the previous 12 months or refused to answer the question. That figure was 12 percent in 1978, 19 percent in 1990, 15 percent in 1999, 14 percent in 2001, 17 percent in 2005, and 22 percent in 2011. Fewer people are reading than ever, but the percentage of people who don’t read has been hovering around 20 percent for 20 years now. Increasing use of the Internet since the mid-‘90s and ever more available tech gadgets haven’t radically changed the percentage of Americans who read books, especially when the study’s plus or minus two-percentage-point margin of error is taken into account.

Brooklyn, N.Y.-based Richard Eoin Nash is a forward-thinking publishing veteran who ran Soft Skull Press, an independent publisher, from 2001 to 2007. He wasn’t surprised by this result. “Frankly, this ‘reading in decline’ business struck me as a bunch of hokum,” he said.

Nash currently wears several hats as the founder of Cursor, offering what he describes as a “new, social approach to publishing,” the publisher of Cursor’s Red Lemonade imprint, and the vice president of Community and Content for Small Demons, a startup that tracks the rich content inside of books, including songs and places referenced in them.

“There is absolutely no sign that reading is in danger,” he said. “As a rule, these things tend to get exploited by people looking for stories about how the sky is falling, whether it’s because they’re looking for funding, or whether it’s because every establishment institution that purveys culture in the end is looking for ways to preserve its status. Changes in technology, all other things being equal, tend to undermine its status. So, whether it was Socrates complaining about books or the great comic book scares of the 1950s when four-color printing came about, every time there is a new technology that allows more and different culture to be created, the guardians of the status quo announce that civilization is over.”

E-Books Result in More Reading, Even in Men

On the other hand, despite the continued slight decline in reading overall, e-books are increasing the rate of reading among some people. According to Pew, “30 percent of those who read e-content say they now spend more time reading, and owners of tablets and e-book readers particularly stand out as reading more now. Some 41 percent of tablet owners and 35 percent of e-reading device owners said they are reading more since the advent of e-content.”

Samantha Becker, research project manager of the U.S. IMPACT Study at the University of Washington’s Information School, said, “I think it may be too soon to tell whether e-readers are making readers out of non-readers. But it certainly has the potential to be a hook for boys and other reluctant readers if they are enticed by being able to use technology. The other thing that e-books provide is the ability to link to other resources beyond the print, including videos and other enhanced content that will make reading more fun and interesting. This is an underutilized capability of e-books, particularly for tablets, but I think it will be a growing area of development as the market expands, and eventually there will be books written with enhanced content in mind.”

E-book users earn a gold star for reading more avidly than any other group. The Pew study finds e-book readers are “relatively avid readers of books in all formats: 88 percent of those who read e-books in the past 12 months also read printed books. Compared with other book readers, they read more books. They read more frequently for a host of reasons: for pleasure, for research, for current events, and for work or school. They are also more likely than others to have bought their most recent book, rather than borrowed it, and they are more likely than others to say they prefer to purchase books in general, often starting their search online.”

Significantly for publishers who feel the ground shifting under their feet with recent developments such as the demise of Borders and some other traditional bookstores, e-book readers are more likely to buy the books they read, while other readers are more apt to borrow.

“Is this part of a CD moment?” Nash wondered. “We had this moment in the music business where people embraced the CD player over their cassette player, and they started acquiring a significant amount of CDs. At a certain point, that plateaued as people acquired a critical mass of stuff, and then shifted to a more sedate degree of consumption. By consumption, I mean purchase. The amount they listened to remained the same, but the amount they purchased started to taper off. This is highly speculative. I’m not saying this will happen. But as Nassim Taleb (author of ‘The Black Swan’) always points out, every straight line going up at a diagonal stops some time.”

Given that e-book readers are more likely to purchase books than non e-book readers, every publisher will have to cater to them to stay afloat in the rapidly changing book marketplace. Nash observed that figuring out how to do this is the publishers’ problem, not the readers’.

“The interesting thing is the reader doesn’t have a problem here,” he said. “Because for so long, people could only read what a fairly small group of publishers picked for them to read. Readers were living in an oligopolistic world. So we didn’t really have to think very much about readers. They were only peripherally part of the equation. From a cultural standpoint, they were absolutely central. But in terms of talking about the industry, they were an abstraction. They were helpless. Now they have power. Now they can choose not just from a much larger group of publishers than existed before, but also from a bigger chunk of publishing history, as books stay in print longer and books that were out of print get put back into print.”

He added, “I would emphasize how significant it is that books are no longer going out of print. Most books published in 1986 were not available in bookstores in 1990, so there was this forgetting. We’re sort of living in a science-fiction movie where no one forgets, where everything published stays published. That gives readers tremendous power.”

Do E-books Contribute to the Digital Divide?

The Pew poll, which was conducted in English and Spanish, found Hispanics read less than white or black people, and that lower-income Americans read the least: “A fifth of Americans (18 percent) said they had not read a book in the past year. This group is more likely to be: male than female (23 percent vs. 14 percent), Hispanic than white or black (28 percent vs. 17 percent and 16 percent), age 65 or older (27 percent), lacking a high school diploma (34 percent), living in households earning less than $30,000 (26 percent), unemployed (22 percent), and residents of rural areas (25 percent). Those who did not read a book last year also tended not to be technology users.”

Do e-books contribute to the digital divide in which those without access to technology are being left behind in a tech-centered world? Becker said, “I don’t know that e-books contribute to the digital divide right now, though that’s certainly a possibility in the future if e-publishing overtakes traditional publishing and readers are shut out of participating because of excessive restrictions in borrowing and lending, or prohibitive costs for accessing devices and content.

“I think there is some more interesting research to be done around the intersection of reluctant readers and people who also don’t use much technology. It seems likely that those folks are probably living on the margins generally, and lack of reading and use of technology is a symptom of their circumstances rather than a cause. Ensuring that rural, poor, unemployed, and other marginalized groups have access to reading and self-improvement has always been a core value for public libraries, and it continues in ensuring access to technology and digital literacy skills. Librarians see this as part of their mission, and e-book access is becoming part of that mission, too.”

Looking Toward the Digital Future

The Pew study shows that Americans have begun to move toward reading books, newspapers, and magazines digitally, without waiting for the publishing industry to figure out how to survive this shift.

Nash reflected on the history of the publishing industry to frame the current moment. “In the last 150 years, publishing became a weird artifact of the industrial revolution,” he said. “With the industrial revolution, you tend to have this really stark separation between producer and consumer, because you make money off of scale. In an analogue, mechanical reproduction situation, the primary way you’re going to make money is because your marginal costs always decline. It starts high and always it declines. So the more you can print of something, the more money you’re going to make on each additional unit. With digital, the marginal cost of reproduction is virtually zero. What we’re witnessing most clearly is the slow demise of the industrial revolution model. It’s interesting because books began it. Books were the first mass-produced object.”

As Pew’s research shows, only a few years after their introduction, e-books have arrived as an important part of reading in America, whether publishers and booksellers are ready for them or not.

Jenny Shank is the author of the novel “The Ringer” (The Permanent Press, 2011), a finalist for the Reading the West Book Awards. Her fiction, essays, and reviews have appeared in Prairie Schooner, Alaska Quarterly Review, McSweeney’s Internet Tendency, Poets & Writers Magazine, Bust, Dallas Morning News, High Country News and The Onion.