How a $35 Tablet Could Revolutionize Classroom Learning 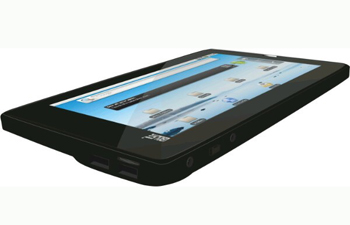 The Indian Ministry of Education is buying some 100,000 Aakash tablets, subsidizing the costs so that they are available to students for about 1,500 rupees, roughly $35.

At $35, the stakes have changed. The price...means that the Aakash tablet will be in the hands of thousands of Indian students."

When Amazon unveiled its new Android tablet, the Kindle Fire, last month, analysts said that its price could well make it a viable competitor to the wildly successful iPad. Indeed, while the iPad has ignited great interest in tablet computing, particularly in schools, that interest has really just been in iPads. The Kindle Fire’s price ($199) is a lot cheaper than the iPad (which starts at $499). But the price tag of the Amazon tablet still makes it a luxury item (albeit a less expensive one) and puts it out of reach for many students.

The I-slate will be an electronic version of the handheld blackboard slates used by many school children around the world. The device will be solar-powered for use in classrooms without electricity. While still in production, it’s being developed by researchers at the Institute for Sustainable and Applied Infodynamics (ISAID) — a joint program of Rice University and the Nanyang Technological University in Singapore. Once mass-produced, researchers say the price should be less than $50.

Promises of these sorts of low-costs devices — under development or in production — have been ongoing for awhile now. But last week marked the official launch — and the actual distribution — of the Aakash tablet, better known as the “$35 tablet.”

The Aakash tablet was developed and manufactured by a British company called DataWind in partnership with the Indian government. The tablet will be available commercially for around 3,000 rupees. The Indian Ministry of Education is buying some 100,000 tablets, subsidizing the costs so that they are available to students for about 1,500 rupees, roughly $35.

Despite that low price tag, the device is actually fairly powerful. It will run Android 2.2, although it does not have access to the official Android App Store. (Users will be able to access GetJar’s app store instead.) It has a 7-inch screen. (It’s resistive and doesn’t have multitouch.) It has a 366 MhZ processor and 256MB RAM. There’s 2GB of flash memory (expandable up to 32GB) and two USB ports. There are options to add a 3G card, but all the devices are WiFi capable. The battery life, however, is its downfall: just three hours.

The Stakes Have Changed

Clearly this is no iPad. But at $35, the stakes have changed. The price, along with the support from the Indian government, means that the Aakash tablet will be in the hands of thousands of Indian students. This gives them access to a mobile and Internet-ready device, which means users can browse the web, use software applications, and access e-textbooks they never would have otherwise been able to afford.

Amazon’s Kindle Fire, even at $199, is still a luxury item for most

With access to the Internet, e-books, and learning apps, it will be interesting to watch how devices like the Fire and the iPad will fare in the price wars against these kinds of low-cost tablets. Sure, they’re probably faster and fancier, but in the long run, do they enable the same kind of easily accessible learning? And isn’t that the point?

Manufacturer Datawind said it can currently produce about 100,000 units a month; that will barely scratch the surface of the demand — even in India, where the government has said it hopes to get all 220 million children online. It’s part of a larger effort to boost literacy and graduation (both high school and college) rates in the country as well. The Guardian reported that the country has raised literacy rates to about 78 percent and has a goal of 30 percent enrollment in higher education by 2020. At this point, only about 7 percent of Indians graduate from high school.

As ThinkDigit observed, the Indian tablet market is actually seeing quite a bit of competition for these low-cost devices. Even though the iPad remains the dominant tablet worldwide, it’s clear that there’s a groundswell of interest and innovation around developing these tools to be far more affordable and accessible around the world. And it’s possible, particularly now that people see the $35 tablet has been achieved, that others will be able to bring the price tag even lower. As Datawind CEO Suneet Singh Tuli noted, his company welcomes the competition to improve the product and drive prices down further.

“The intent is to start a price war. Let it start,” Tuli told the Guardian, challenging others to build a better, cheaper device.