5Across: Beyond the Book: E-Books and Self-Publishing 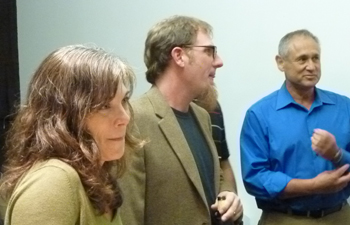 Lorena Jones (Chronicle Books), Kevin Hunsanger (Green Apple Books) and Larry Jacobson (author and speaker) chat before the 5Across taping. See more photos of the shoot "here":http://www.facebook.com/media/set/?set=a.10150367066609029.375248.91063759028&type=1
"We are pretty much at the mercy of Amazon as a monopolist around what the [e-book] format can be, and that is an unfortunate situation." -Ben Clemens
Click here to read the whole series
ADVERTISEMENT

Print books have survived the onslaught of so many new forms of media over the years, from movies to television to the Internet. But digital media finally caught up to books with the introduction and popularity of e-books and e-readers, with lower price points and the convenience of the “buy” button and quick downloads. Not to mention: who wants to carry a bag full of books on vacation when one small e-reader will carry 1,000 of them?

On this episode of 5Across we look more closely at the e-book boom, as well as the growing clout of Amazon. The e-tailing giant now has so many fingers in the book publishing pie, from selling books, publishing books, having tools for self-publishers and so much more. Could it become a monopoly and bully for brick-and-mortar bookstores? And what about the rise of self-publishing? With so many authors going that route, book publishers will have to prove their value to writers more than ever. (Note: We invited Amazon to provide a representative for the show, but they declined to participate.)

5Across: Beyond the Book

Dan Brodnitz is director of the english-language program at video2brain, a leading video training publisher. He is a past publisher at John Wiley & Sons and O’Reilly Media, and interviewer-in-chief at about-creativity.com.

Ben Clemens started out as an art student, painter, and print designer, supporting himself doing four-color separation at a lithography house. Over the past 15 years he’s worked on web-based community and generative design projects with the New York Times, Razorfish, Yahoo, and Current TV. He loves making pictures of all kinds, and turning them into books—most recently working for his six year-old daughter. At Blurb.com, Ben is the Director of User Experience, which involves visual and interaction design for BookSmart, Bookify, blurb.com, and new e-book tools. He blogs at practicalist.com and posts an occasional photo at sweetobscurity.com. Don’t look at his twitter feed @benvoluto, it’s pretty revealing.

Kevin Hunsanger, an owner of the venerable Green Apple Bookstore, has been a San Francisco based raconteur for more than 20 years. He is the “Book Guy” of the KFOG Morning Show, a member of the Litquake Advisory Board, and his writings on food and wine culture have been published in The Nile Guide, the SF Bay Guardian, and The Onion.

A California native, Larry Jacobson grew up on the beaches of the Pacific Ocean sailing, kayaking, swimming, and scuba diving. A recognized expert in the corporate marketing world, he was president of one of the premier incentive travel companies. An avid sailor, he has over 50,000 blue water miles to his name. Larry is a motivational speaker, self-published author and lives in the San Francisco Bay Area.

Lorena Jones is a publishing director at Chronicle Books, where she spearheads the company’s digital publishing and directs the lifestyle and food and drink titles. Prior to joining Chronicle in 2009, she worked for Ten Speed Press in Berkeley for 15 years, where she was the editorial director from 1999 to 2004 and the publisher from 2004 to 2008.

If you’d prefer to watch sections of the show rather than the entire show, I’ve broken them down by topic below.

Amazon: Force for Good or Evil?