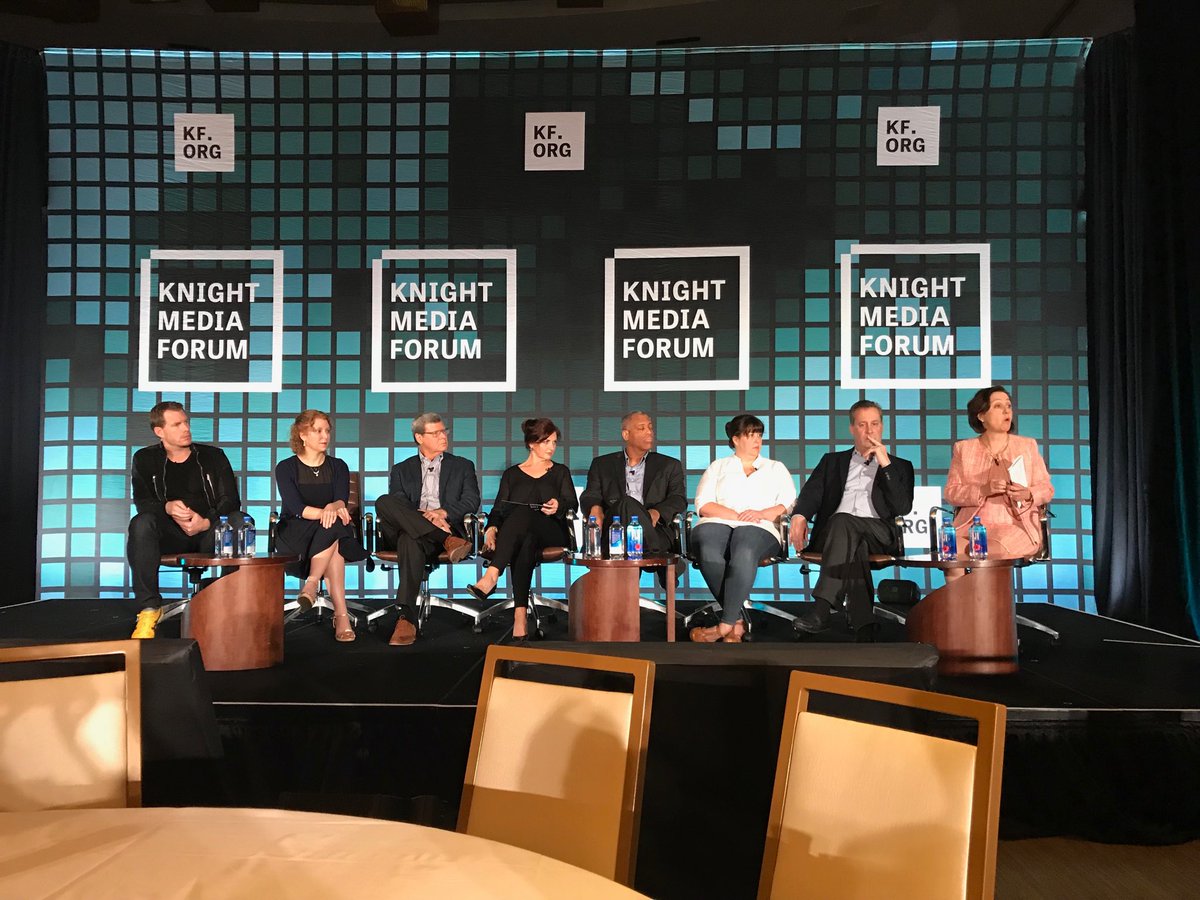 MIAMI – The theme of this year’s Knight Media Forum in Miami was “Strengthening Local News, Community and Democracy.” The annual gathering of librarians, community foundations and journalists hosted by the Knight Foundation opened with a panel of Knight Commissioners who set a pragmatic but urgent tone on trust, media and democracy.

Smart questions from Tony Marx of @nypl: How do we decide what information to trust as facts? How are we going to protect local news? How can we encourage people to get out of their filter bubbles? How can we figure out what to do about dark money? #infoneeds

Over a day and a half, the future of algorithms and technology took center stage, with talks from tech pioneers and authorities Tim O’Reilly, Jimmy Wales and Amy Webb. But more intimate breakout sessions and panels offered a chance to see where philanthropic attention to media is being directed right now: discussions focused on local media collaboratives, national-local partnerships, community-focused journalism, community and ethnic media, and the science of storytelling among other topics.

Implicit in many of these: It’s a given that media has impact on the health of our democracy, and filling the growing gap in professional reporting is of utmost importance. It’s no longer a point that has to be proven each time it comes up, at least for this crowd. Rather, the gathered leaders in media, philanthropy and tech asked more nuanced questions about impact, metrics, news and how to pay for it all.

The time for talking in nice hotels has ended, it's time to DO stuff, says Tony Marx of Knight Commission on Trust, Media & Democracy. "The times require more of us, and our children require more of us." #infoneeds

On Wednesday, a panel of non-profit news outlets and the community foundations that have supported them discussed the impact of news in their communities. At a fundamental level, what the Texas Tribune offers is the “maintenance of an educated public,” said John Thornton, the Tribune’s co-founder. The Tribune now boasts the largest statehouse news bureau in the U.S.

As the media gets hollowed out, the notion that someone in media has your back gets lost, Thornton said. “What’s filled that void is distrust.”

As in Texas, strong local coverage by a non-profit newsroom is making a difference in Vermont. VTDigger covers the state with impartiality, rigor and a 10-person newsroom. “Maybe not at the national level, but when we report, things change,” said Anne Galloway, the nonprofit newsroom’s founder. At the state and local level, you can be more pragmatic, she said, and there’s less political noise crowding out the journalism, even when covering the state legislature. “We give everybody a hard time,” she said.

Are attention metrics a destructive force?

The day before, tech publishing veteran Tim O’Reilly offered an explanation of algorithms in technology, as well as a warning. In response to a question about the incentives of commercial news, he said, “You put your finger on my biggest concern, we have not realized that we are living within an algorithmic society that is optimizing for the wrong thing.”

"You put your finger on my biggest concern, we have not realized that we are living within an algorithmic society that is optimizing for the wrong thing." — @timoreilly #infoneeds

Algorithms, O’Reilly said, are designed with an objective function. Facebook’s News Feed algorithm is designed for engagement. Media, both real and propagandistic, optimizes for that News Feed algorithm in search of likes and shares. “The clicks are always going to be on the sensation,” he said, calling the feedback loop of attention and traffic a destructive force.

Can Facebook be fixed? O’Reilly is hopeful. In many respects, he said, Facebook’s current situation is analogous to Google in 2011. Then, Google faced its own “crisis of trust” and responded with a major update to its search algorithm to punish spammers and publishers of low-quality news and information. That effort worked, and whatever Facebook does not may also.

Still, “We have to find other economic models for the news business,” O’Reilly said. A model built on attention metrics can always be gamed. “You have to create value for people who care about that value. When people pay for the things they care about, you can have a better business.”

What’s the impact on communities?

In rural communities in Colorado and New Mexico, “Small Towns, Big Change” explored urgent questions like how to create robust economies, protect natural resources, and improve quality of life. Journalism itself wasn’t the aim, but rather a means to identify solutions for the LOR Foundation, who collaborated with Solutions Journalism and seven local news organizations. It came about after the foundation learned that most people in the regions it served got most of their news from Facebook instead of local or even national news, said LaMonte Guillory, communications director for the LOR Foundation.

.@LaMonteG shares insights from @soljourno's work in the Intermountain West asking communities "How well do your local news outlets cover the things you care about?" https://t.co/qkhWkByGfs #infoneeds

In Philadelphia, another solutions journalism project has had an impact both in the field of journalism and on the issues it has covered. The Reentry Project won a 2017 Philly News Award for best non-traditional news provider and led to 10 stories produced in collaboration with multiple news outlets. And its work led to changes at the city, in local business practices and in the reentry community’s perception of the media itself:

What comes next for media funders?

Futurist Amy Webb is concerned about the future and urged funders to act. “You have the power to fund the future of news you want,” she said. With the rise of AI, fake audio and video, the alternative could be catastrophic.

The Knight Commission on Trust, Media and Democracy will be releasing its recommendations later this year.