How the Women’s Hackathon at WVU Tackled Diversity in AI 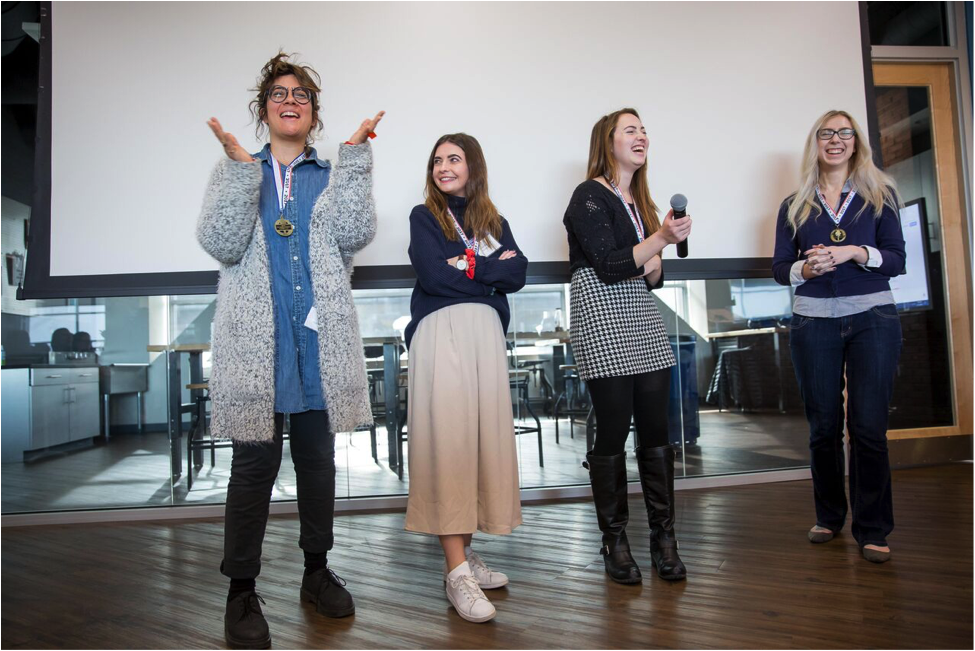 Students, faculty, and professionals from across the country joined together to innovate and diversify artificial intelligence (AI) with MediaShift and the West Virginia University Reed College of Media at the Hack the Gender Gap: Women’s Hackathon event Nov. 9-11, 2017. The event took place at WVU’s Media Innovation Center, and was the fourth in a series of Women’s Hackathons produced and supported by WVU and MediaShift.

The challenge this time was to create a startup that included AI and media, and bridged one important gap, from gender gap to religion gap to disability gap.

"You get a great sense of hope and excitement for the future when you see strangers collaborate to solve real-world problems." -Cassandra Rinker
ADVERTISEMENT

A crash course in diversity and AI

The weekend started with an opening reception and speaker panel, meant to get creative juices flowing and bust stereotypes about artificial intelligence technology.

The panel and weekend events were moderated by MediaShift’s Mark Glaser and USC’s Erin Reilly, a creator, strategist, and educator who works to shine a light on diversity gaps throughout the media and tech industries.

“From race, gender, disability, religion affiliation, sexual orientation, and languages/ cultures around the globe — diversifying artificial intelligence shines a spotlight on designing solutions to address the many gaps prevalent in the current development of AI,” Reilly said. “Hackathons like this weekend help us take action and create the change we want to see and that’s best done when we do it together with many voices and perspectives at the table.”

And some of those voices and perspectives were heard this weekend. Following a short breakfast on Friday morning, attendees were given a brief introduction about the rules and logistics of the event. USC Professor Amara Aguilar followed up with a short talk about some of the challenges in attempting to diversify AI in tech and media.

Around the Center, several stations were set up with current AI gadgets and projects to spark ideas and display examples of the innovation that already exists.

Fanyu Zuo of Loyola University Chicago holds one of the ‘bot’ team mascots given to participants during the Hackathon event. Photo by David Smith.

As day one continued, several speakers added their own experience and perspectives to the mix in an attempt to keep attendees motivated and thinking about ways to make their pitch better. UX Designer Ximena Acosta shared insights on human-centered design and was followed by Megan Tiu from Frenzy.ai, who gave tips and pointers about developing business models and market plans centered around AI technology.

Coffee and ideas were flowing and energy was at its peak after a long day of work. Faculty and professional mentors checked in on the teams, finding that some were struggling to tap into their creative sides.

“At first I was a little worried that my background was simply journalism, rather than entrepreneurship or technology,” said Valerie Royzman, Hackathon participant from Kent State University, who was on the winning team. After the weekend’s event, Royzman decided the challenge was worth it. “I learned so much and left West Virginia feeling very empowered to be a woman, a journalist and just a contributing member to society. The Hackathon challenged me as a creator because it’s not what I’m used to. I’m passionate about creating through words; I talk to people, research and build stories out of what I discover, and I could apply those same skills here, just in a different way.”

After a very long and tiring 14-hour day, participants left the Innovation Center anxious and excited about the next day’s presentations to judges.

Hackathon participants hard at work during the Friday session. Photo by David Smith.

On Saturday morning, crews joined together for a few short hours to finalize their pitches and presentations for the judges. One final guest speaker, Jennifer Ellis from Blackstone Launchpad USC, spoke on the importance of the pitch.

With time winding down and stress levels peaking, it was time for the teams to bring their ideas to the table. With five minutes for each pitch, teams came to the floor and presented their ideas to the judges. From AI personal medical assistants to accuracy tools meant to “call out inaccuracies and biases in the media,” these teams tossed their gaps into the air and knocked them out of the park.

The gold goes to “Context”

In the end, it was Team Mak that took home the prize with their idea for Context, individualized evaluation software meant to personalize a reading experience based on disability. The evaluative process tracks reading levels, offers different fonts, contextual images, highlights important content and breaks down text to develop a “personal reading adventure.” Team Mak offered an in-depth look at potential finances, business plans, market research, and tech specifications.

The team consisted of Brittany Osteen of WVU, Shirin Anlen at MIT, Valerie Royzman at Kent State, and mentor Cassandra Rinker from WVU, who says even though her team won, the weekend felt nothing like a competition.

“It genuinely felt like a space to learn new skills and explore topics in inequality. I was impressed by all the participants, both by their ideas and their empathy for others,” Rinker said. “You get a great sense of hope and excitement for the future when you see strangers collaborate to solve real-world problems. Everyone has something to contribute to these ‘bigger picture’ conversations regardless of their background.”

Kassy Taylor is a graduate student in the Journalism program at West Virginia University and a student contributor to 100 Days in Appalachia. She is a dedicated storyteller and lover of all aspects of the craft.
Tagged: artificial intelligence collaboration gender diversity hackathon west virginia university