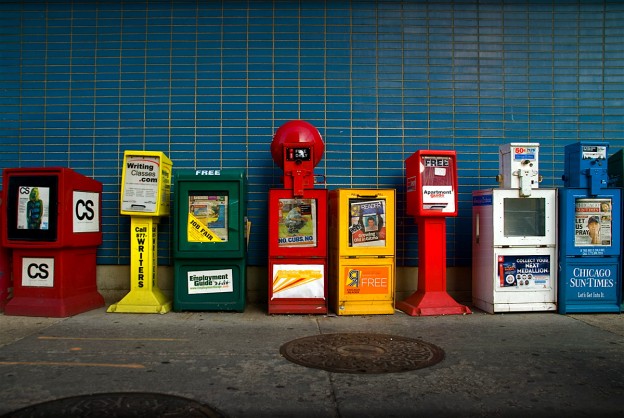 Each term, the University of Oregon invites guest speakers in the academic and professional media industry to participate in the “Demystifying Media” program. The lectures aim to challenge faculty and staff by introducing them to the latest thinking in media research and practice. The third talk in the series for Winter 2017 explored the future – and status – of local newspapers. Coverage of the lectures is provided through a partnership with the University of Oregon.

Christopher Ali thinks that the doom-and-gloom narrative of newspaper journalism in the digital age is incomplete. In fact, he says, that narrative isn’t even half the story.

“So, what does this mean? It means it is time to rewrite the story of local newspapers.”

Ali is an assistant professor of media studies at the University of Virginia and a Tow Fellow at Columbia Journalism School. As part of that fellowship, he’s been working with University of Oregon School of Journalism and Communication professor Damian Radcliffe to understand the ecosystem of newspapers with circulations of less than 50,000.

These smaller papers make up 97 percent of the newspaper industry. Ali calls them “the silent majority,” because in interviewing and surveying nearly 500 people across the small-market newspaper world, the researchers found a very different media environment than the one dominating the news industry narrative.

Instead of desperation, Ali and Radcliffe found innovation, strong community ties and a sense of optimism within these small newsrooms. These newspapers do face hurdles, but not the same cliched issues as metro and national news corporations, Ali argues.

When taken as a whole, the newspaper industry is struggling. The 2016 Pew Research Center State of the News Media report said that the industry had cut 20,000 jobs in the last 20 years. Pew called 2015 “perhaps the worst year since the recession.”

Tracking how these papers currently stack up to the national market is more tricky, he says. The National Newspaper Association stopped collecting statistics from small market papers in 2009, so it’s difficult to compare their revenue, layoffs and closures to the industry as a whole.

Anecdotally, at least, not all small papers are seeing revenue declines. At the The Coloradoan in Fort Collins, Colorado, for example, paid circulation is up over the last two years.

“This is pretty significant,” Ali said. “When we look at the experiences of the papers individually, they’re not reflective of this master narrative of ‘your medium is dying.”

That’s not to say small market papers aren’t facing challenges.The future of the print product is uncertain, Ali says, and small papers in particular face the possibility of corporate buy-outs, and the question of whether it’s beneficial to have a publisher who doesn’t know their community.

However, in smaller communities these newspapers are still relevant, often as the only local source of information, Ali says. In Bruce Mississippi, locals call The Calhoun County Journal for directions and phone numbers. Ali equates it to a local Google.

“Our citizens rely on us for services we would never think about,” Joel McNeece, the publisher of that paper told Ali. “A lot of non-newspaper people don’t realize they take for granted the role that the newspaper plays in the community.”

“Anecdotally, we tend to mock small town newspapers — they’re kind of backward, parochial, when it comes to technology they might be hopelessly analog,” Ali quipped.

He admits that is sometimes the case. At a few papers the researchers looked at, online news was literally a scan of the print paper. But other newspapers were shooting live video, creating podcasts, and were eager to dive into digital possibilities. Five percent of newsrooms said they used Virtual Reality technology. The Herald and News in Klamath Falls, Oregon is incorporating augmented reality into their paper, through a partnership with the local community college.

The biggest challenge small newspapers face in terms of innovating is resources. Trying new things and keeping up with digital trends takes time and money — something small staffs don’t have in abundance.

When Ali and Radcliffe asked the small market news community about the industry buzzword “engagement,” they got plenty of sarcastic responses.

“Engagement is a five-dollar word dreamed up by overpaid consultants trying to sell newspapers on what they already doing — reporting on the lives and concerns of people in their communities,” one respondent wrote.

For reporters in smaller towns, being in touch with the community they live in is just part of the gig, Ali explained. The researchers also found plenty of papers who had carried that engagement into the physical world — hosting roundtables to discuss coverage and community issues, hosting events and even opening up their editorial meetings.

This is an opportunity to both connect with an audience, and to make money, Ali points out. One survey respondent said his paper makes between $500,000 and $750,000 a year doing events.

Building that community of journalists proves a bit harder. One concern the researchers heard about was the difficulty small town newspapers are having recruiting and retaining young talent, Ali said.

Ali stresses that “we need more nuanced language to speak about newspapers.”

Grouping small newspapers into the “monolithic, homogeneous” experience of the news industry simply isn’t accurate, he argues. That narrative creates the perception that all newspapers are “grandma with one foot in the grave,” one survey respondent told Ali. In reality, more than half of the employee’s Ali and Radcliffe surveyed felt “very” or “quite” secure in their jobs, and were optimistic about the future of small newspapers.

“So, what does this mean? It means it is time to rewrite the story of local newspapers,” Ali said. “These small markets have been sorely neglected, and I think it’s time we start filling in the blanks of this story.”

2 responses to “Demystifying Media: What’s the Future of Local Newspapers?”