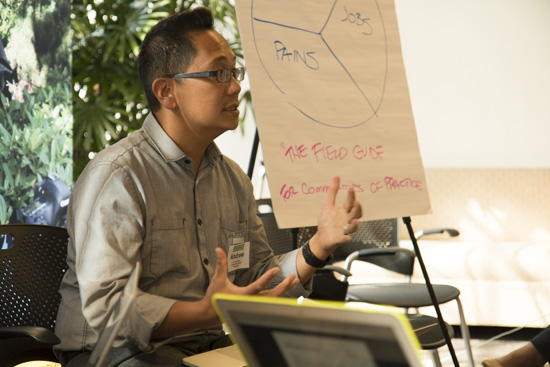 Andrew DeVigal leads a breakout session at Experience Engagement to discuss ideas for a community engagement platform that he plans to make available to the public by April 2017. Photo by Emmalee McDonald.

Looking to help reshape how modern journalists define and practice engagement, Andrew DeVigal is spearheading a new collaborative project that he hopes will better connect journalists with the communities they serve, as well as one another.

DeVigal, Chair in Journalism Innovation & Civic Engagement at the University of Oregon, is a proponent of community engagement, a growing reform movement that aims to make journalism more community-centered and relational. DeVigal and others see engagement as a way to forge connections between journalists, news organizations and community members, building trust and reaffirming journalism’s role as a civic good.

“I believe the importance of local and community journalism is more critical today than it ever has been." -Andrew DeVigal

Led by DeVigal and executive director Regina Lawrence, the UO School of Journalism and Communication’s Agora Journalism Center co-hosted an engagement “unconference” with Journalism That Matters in 2015 and published last year’s 11-part Redefining Engagement series with MediaShift, and it continues to explore ways that the approach can be integrated into journalism education and professional newsrooms.

The Center’s latest project — a digital platform to support engaged journalists — is one that DeVigal sees as a key step in carrying engagement forward. According to DeVigal, the platform will allow engagement-focused practitioners to connect and collaborate in ways that aren’t possible on existing platforms like Facebook or Google Groups.

The new platform will rely on journalists talking to one another and sharing best practices, similar to a social network. But it will fill in the gaps left by traditional social media. Photo by Jason Howie.

In addition to facilitating conversation, the new platform aims to make resources, case studies, best practices and “building blocks” easier to find, so that lessons can be shared and amplified across newsrooms.

“The best way I can describe it is comparing it to what a recipe might look like,” DeVigal said. “As much as people say, ‘Wow, I’d love to make that dish,’ without knowing the ingredients, they won’t know how. Looking at case studies, what we want to do is take recipes and break them down into ingredients and process. We want to make sure people are engagement-ready.”

Furthering his comparison, DeVigal says the platform will connect journalism chefs and cooks throughout the country to make customizable dishes that will fit the tastes of the local community. In doing so, he hopes the platform will facilitate more authentic connections between newsrooms and the public.

“I believe the importance of local and community journalism is more critical today than it ever has been,” DeVigal said. “The role of journalism isn’t just about listening [and reporting]. It’s also about facilitating conversations and becoming mindful about the information we provide so people are able to make decisions on their own.”

At the Experience Engagement conference, DeVigal leads a discussion about engagement. Photo by Emmalee McDonald.

To help ensure that the platform meets the needs of real-world end users, DeVigal and his team organized work sessions at Experience Engagement and ONA16, put together a steering committee to co-design the platform, and created an advisory committee to offer feedback on the site’s beta. Financially, a grant from the John S. and James L. Knight Foundation has helped DeVigal and his team to partner with the Portland-based company FMYI to build out and customize the platform from FMYI’s existing technology.

DeVigal says the platform, which will likely get a name within the coming weeks, is on schedule to go public by April 2017. EdShift will offer an in-depth look as it makes its debut.