Remix: How to Teach Journalism in the Press Box 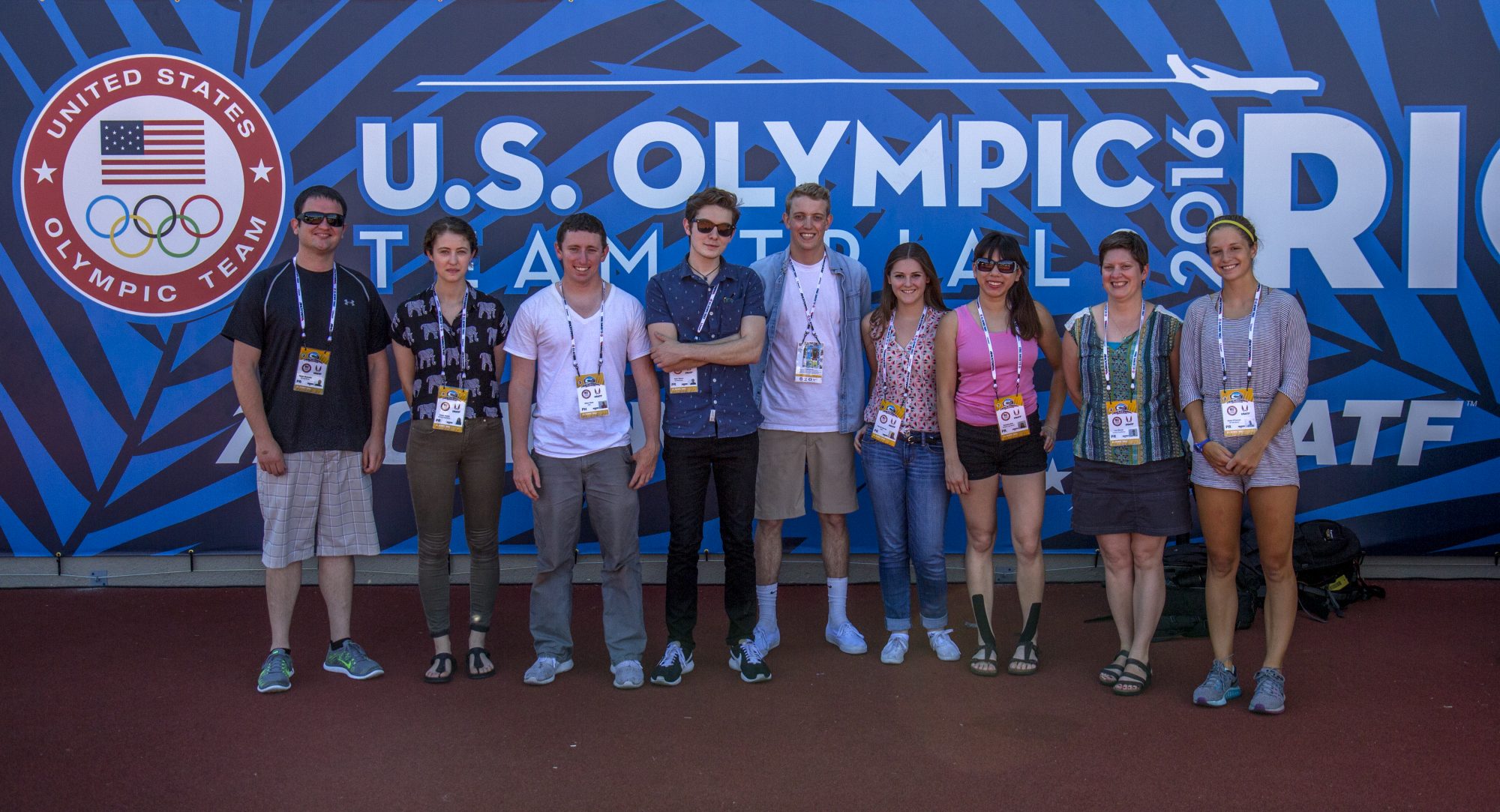 University of Oregon students pose for a team photo during the 2016 U.S. Olympic track and field trials, which they covered as part of a class offered at the School of Journalism and Communication. Photo by Lori Shontz.

When I was a full-time sports journalist, I joked about how I’d teach a sports reporting class. I’d take the students to, say, a baseball game. I’d make it rain. And then I’d announce they had to file two stories anyway even though there had been no game.

This happened to me as an intern for The Morning Call in Allentown, Pennsylvania. It rained at the velodrome, and instead of getting the night off, as I assumed, I had to chase down world-class cyclists as they were leaving and scramble to think of questions. A terrific learning experience.

Now I teach at the University of Oregon’s School of Journalism and Communication, and my spring term class — officially “Sports Bureau” but known by all as “track class” — combines classroom instruction with that kind of on-the-job training.

My students cover the track and field events at one of the sport’s storied venues, Hayward Field, which is in the heart of our campus. They publish all of their work, either on our class website or for professional publications that need coverage of major events. In the past two years, my students have covered the NCAA championships, U.S. nationals and the U.S. Olympic trials for 33 outlets, ranging from The Arizona Republic to The Tampa Bay Times, from the Santa Cruz Sentinel to the Syracuse Media Group. Twenty-five outlets paid the students.

But this is more than a freelance gig. It’s also a rigorous learning experience: The students learn critical thinking skills that will benefit them in any media profession.

Find a sport (or any activity) that resonates with your community

Eugene, Oregon, is Tracktown USA. The sport matters to the city, so students to connect to the whole community. Before they show up at an actual competition, they read history of both the sport and Eugene itself. They attend track social events, where they learn to work the room.

The assignment: Introduce yourself to three people. Say you are new to the track beat. Ask them what you should know.

I invite coaches to the classroom, and they go deep with the students, who begin to realize how much they don’t know or don’t fully understand. The students aren’t getting quotes for stories. They’re listening to learn.

George Walcott, a former Pac-10 sprint champion, demonstrates the technique for starts. Heike McNeil, who has a doctorate in chemistry, details the science of training cycles. Ian Dobson, a 2008 Olympian, breaks down distance-race strategy and explains how low-paid runners make ends meet. Vin Lananna, executive director of Tracktown USA, incoming president of U.S.A. Track and Field and a 2016 Olympic coach, discusses the sport’s challenges — and its potential.

Don’t just be a teacher. Be a coach

A coach’s job is to put athletes in better position to succeed, and that’s what I do at competitions. I might ask follow-up questions with a student in the interview area, then discuss how to do it herself the next time. I might critique a lead and ask a student to revise it on the spot. I might help someone keep track of heights to live-tweet the pole vault.

The assignment: One, maybe two, stories. Students don’t leave the track until they’ve filed — meaning, they’ve sat side-by-side with me as I ask questions and tweak copy.

A bonus: This keeps my professional skills up to date, and that makes me a more effective teacher.

Give students a realistic picture of professional life

Sports journalists don’t have a 9-5 schedule, and track class is on the schedule for Friday night. Three times a term, students spend most of a Saturday at the track. At the Eugene Marathon, they begin reporting at 6 a.m. on a Sunday.

Deadlines are real in a way that classroom due dates are not. As I tell students, basketball players practice free throws, but they can’t simulate the pressure of taking those shots with seconds left on the clock. They have to do it. Here, the students do deadlines.

A bonus: This drives home that sports journalism isn’t really about the sports. It’s about the journalism.

The students are side-by-side with professional journalists. They conduct interviews together. They crowd around the television together to watch replays. They complain together about writing over the roar of the clean-up crew’s leaf blowers. The students learn not just by doing, but also by watching what the pros do.

A bonus: Students learn to keep their own financial records.

Sports teams break down film, right? We do the same. After every meet, students send me an email detailing what they did well, what they need to do better and what they would like me to focus on the next time I edit with them.

That’s metacognition — thinking about thinking — and it’s a crucial but often-overlooked component of learning. This tool is transferable anywhere: football games, the education beat, city council and beyond.

Track class gives students experiences they could never get in a classroom. Watching a meet in a downpour. Writing stories in weather so cold we could see our breath. (Pro tip: fingerless gloves.) Being the last ones in the venue and finding an unlocked gate.

Students work hard: Eight wrote 84 deadline stories in 11 days during the Olympic trials. They gain confidence, and they learn to write both faster and with more authority. “I haven’t felt like a real journalist until this class,” wrote one student involved in several student media publications. Wrote another, “I’ve improved more as a journalist in a shorter time than I can ever remember.”

My favorite moment came on Day Six of the Olympic trials. The post-competition concert stage was next to the media tent, and as a Johnny Cash tribute band rocked out, two students were writing on an East Coast deadline, another was transcribing an interview and two were straining to hear a press conference over the sounds of Folsom Prison Blues.

Everyone made deadline. A terrific learning experience. No joke.