Bulgarian Analytics Startup Aims to Fix How Publishers Use Data 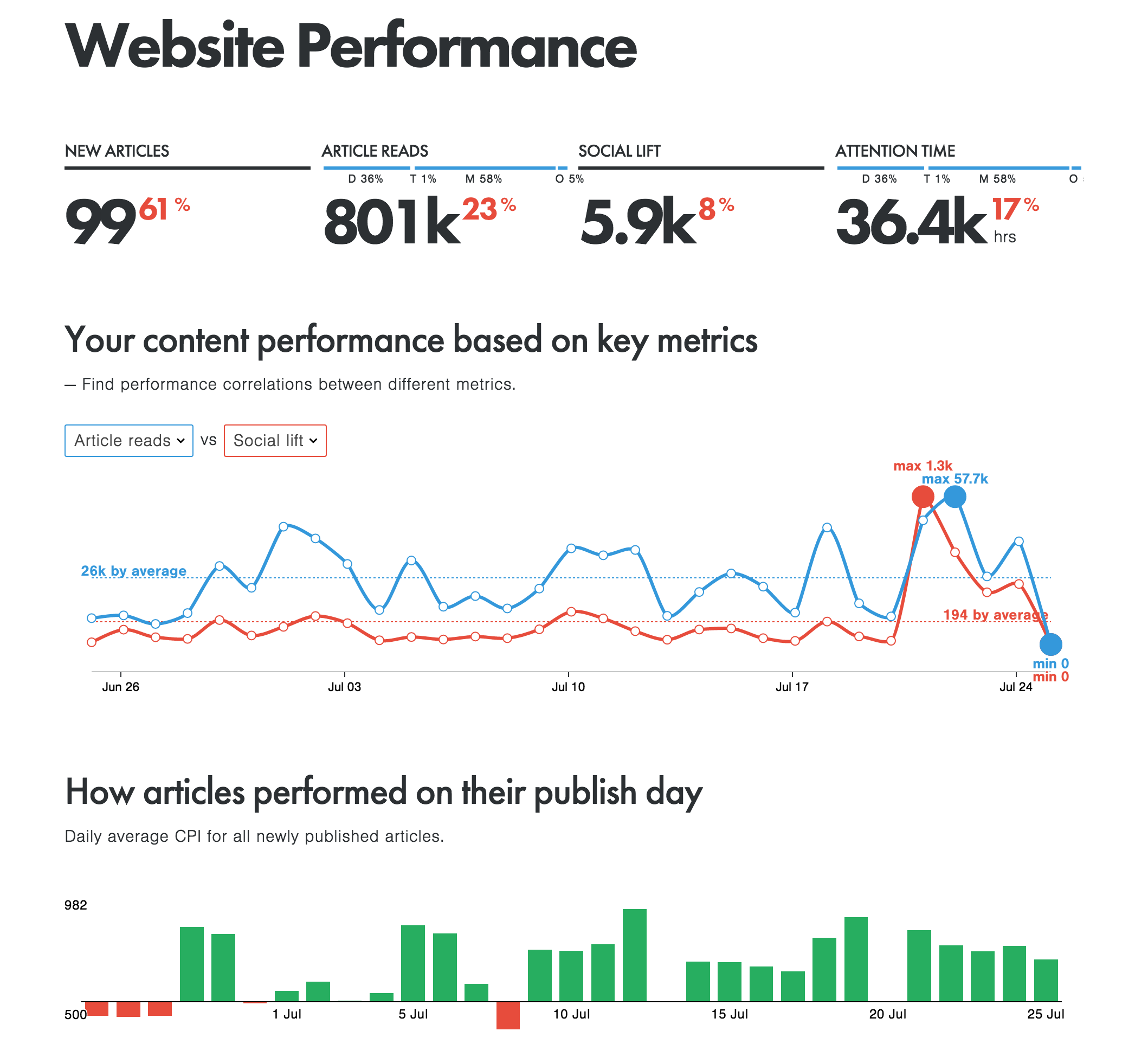 As a matter of fact, 76 percent of editors, CEOs and digital leaders said improving the use and understanding of data is “critical” in a 2016 Reuters Institute survey.

“No matter if you’re a big newsroom or a blogger, you need to use data to calculate your decisions and be more competitive.” – Dejan Nikolić

But in journalism, the systematic analysis of quantitative data is still the exception. Many publishers rely heavily on standard analytics tools and simple metrics to evaluate their content and make decisions about their business model. They have done little to align metrics with editorial priorities and organizational goals, according to another Reuters Institute study.

Several analytics startups, including Serbia-based Content Insights, want to upgrade newsrooms’ blunt analytics weapons. With its customizable software that evaluates the performance of content and writers based on individualized business goals like engagement, Content Insights (CI) promises to upgrade — and simplify — how publishers look at data.

“No matter if you’re a big newsroom or a blogger, you need to use data to calculate your decisions and be more competitive,” said Dejan Nikolić, Content Insights’ co-founder and CEO. “We help editorial teams look at this information directly without data analysts as middlemen.”

Content Insights’ bludgeon to the shortcomings of rudimentary metrics and the slow adoption of more advanced analytics tools is its content performance indicator, or CPI. Measured on a scale from 1 to 1,000 with 500 representing an average baseline, CPI is an algorithm-based index that evaluates how a piece of content performs relative to other content on a publisher’s website.

Anything above 650 represents a strong article, Nikolić said.

CPI scores individual articles against averages of the website or content sections and weights those ratios according to the website’s goals. That way, said Nikolić, the performance of a piece of content can be attributed to authors, sections, topics, articles and the whole website.

In March, the three-year-old startup added $1.12 million to its war chest in exchange for equity from three investors including North Base Media, an investment firm whose portfolio includes News Deeply and CI customer Rappler.

The genesis of Content Insights was Nikolić’s struggle in 2011 to find an analytics tool to help him fairly evaluate and reimburse his scribes at njuz.net, a Serbian satirical website he co-founded.

Sensing a business opportunity, Nikolić and two other analytics brothers-in-arms built a prototype and enlisted more than 30 local and regional newsrooms as early adopters. Four and a half years and 30 paying customers later, the campaign for better analytics looks promising.

One of Nikolić’s editorial allies is Vsevolod Pulya, editor-in-chief of Russia Beyond The Headlines, an international project of government-sponsored Rossiyskaya Gazeta. Content Insights allows Pulya to compare his writers on a fair basis, he said. Unlike Google Analytics or Chartbeat, CPI has also helped him better evaluate content performance and provided insights into what drives reader behavior.

“Certain niche topics,” Pulya told me over email, “won’t get a lot of pageviews, but those who clicked on it would be really engaged readers, improving the website’s overall performance and — probably — creating opportunities for native advertising.”

“The article with the highest amount of pageviews might not actually be the best article,” Baekdal said in an email. “Or having a lot of visitors might not help a publisher make any more money.”

Pulya also noted that his writers and editors care more about how their content performs now that they are using CI’s service.

This is an important point, because newsrooms can only reap the benefits of analytics when the entire newsroom embraces data-informed decision-making. As the Reuters Institute report on media and technology concluded, the lack of a “culture of data” can undermine an organization’s analytics capability.

“There is a huge difference between doing analytics for a web shop and for a publisher,” said Baekdal. “Most analytics tools today try to just be the standard tool for websites, but they don’t distinguish between what type of site it is. That’s not good enough anymore.”

Many publishers have turned to more advanced tools like Chartbeat, Parse.ly, NewsWhip and Google Analytics that provide so-called “universal analytics” to reveal what people are doing on a page instead of just measuring pageviews and visits.

The next big evolution in analytics is what experts are calling “scored metrics,” which take universal analytics, look at the relationships between different signals, such as reader behavior, rank them according to their importance and interpret hints those signals provide. In the news media industry, this trend is called “editorial analytics” — scored metrics tailored to newsrooms’ particular editorial and organizational priorities.

Although a few big publishers, including The New York Times, Financial Times, The Guardian and German daily Die Welt, are leading the way, editorial analytics tools that underpin longer-term goals are still few and far between. Many small newsrooms, according to the Reuters Institute study, still use a range of rudimentary analytics in an “ad-hoc manner” to increase day-to-day traffic.

Vijay Ravindran, former chief digital officer with the Washington Post Co. and an investor and advisor to North Base Media, which invested in Content Insights, told me over email that the pageviews and visits that websites often optimize for are “very crude proxies” for publishers’ goals.

The benefits of editorial analytics

Content Insights, which went through Bulgaria-based accelerator Eleven in 2014, provides scored metrics specifically for publishers. Each CI client can prioritize one of three business models that reflect its unique goals: exposure (for display advertising), engagement/attention (for native advertising) or loyalty (for publishers with a subscription model). Adjusting the weight of these tracks changes how the proprietary algorithm ranks more than 100 metrics, social signals and the relation between them.

Users are able to put the weight on each of these groups according to models they are pursuing. Image courtesy of Content Insights.

Nikolić said CPI lets journalists gain crucial insights into visitor behavior, including why some readers are more loyal than others. “Many tools will tell you that return visitors equal loyalty, but that’s not true. People return for many reasons other than loyalty,” he said.

Han-Menno Depeweg, the digital publisher at Content Insights customer NRC Handelsblad, said the Dutch daily evening newspaper has chosen a mix of engagement and loyalty. “Engagement is necessary for new readers and loyalty for our subscribers,” Depeweg wrote in an email.

Baekdal, who launched his media consulting business six years ago, said customizing analytics according to a publisher’s editorial values and business strategy provides a “far more nuanced view” of content and author performance.

Ravindran shares Baekdal’s opinion about the importance of editorial analytics.

“Publishers are able to adapt the CPI as the world changes around them, and to develop their own unique definition of what successful content looks like,” Ravindran said.

The aforementioned Reuters Institute study goes one step further, stating that unless journalists develop their own analytics tools, journalism will continue to be “shaped by advertising, commercial, and technological priorities.” What’s more, publishing will be at a “huge disadvantage” in the battle for attention with social media, gaming and other sectors.

Comparing two articles published by CI customer Rappler.com, a Philippines-based social news network, illustrates how CPI works. The first article, a piece about a celebrity wedding, got a lot of reads and applause on social media, according to Rappler, but lacked substance. It scored a CPI of 821. The second article contained the full text of a Filipino presidential candidate’s speech and scored far lower on traffic metrics. Yet it earned a higher CPI, 949.

If evaluated on standard metrics, such as page views or likes, the celebrity wedding would easily beat the speech, said Nikolić. When evaluated with CPI, however, the two articles are almost equal in social lift, i.e. social signals with a sharing component, in spite of the big difference in reads and likes.

“The second article’s readers were proportionally much more attentive, engaged and committed in letting their friends know about the content,” Nikolić said.

Although Nikolić said CPI could not “directly influence the bottom line,” it has the potential to contribute to a higher return on investment for certain publishers, including those that rely heavily on display advertising.

“CPI shows you if you could go to native advertising, which means you ought to push certain topics towards readers based on their performance,” he said.

Dutch journalist Depeweg’s said CI’s editorial analytics allow him to promote well-performing articles to publications outside their ecosystem, which in turn would improve their finances.

“CPI helps us to pick stories for syndication and offers our partners around the world only the best content about Russia that we produce,” said Pulya of Russia Beyond The Headlines.

Vsevolod Pulya, editor-in-chief of Russia Beyond The Headlines.

The Moscow-based journalist also said editorial analytics save time and allow publishers to focus on readers’ reactions to content instead of chasing page views.

Ravindran, who left the Washington Post for a virtual reality startup earlier this year, said better insights into visitor behavior enable publishers to figure out better long-term monetization options, such as subscriptions, especially for their most engaged users.

A healthier bottom line thanks to better analytics would certainly help many digital publications, not least those relying disproportionately on ad revenues, but tackling the financial upheavals the news industry has been fighting for years requires more than just additional profit. Publishers need alternatives to the common business models publishers are struggling with.

It seems that editorial analytics cannot win publishers’ war for fiscal stability, but it can help decide a few battles.

Can editorial analytics help with platforms?

According to media consultant Baekdal, editorial analytics cannot by themselves reduce platform dependency, the degree of which largely depends on the publication’s editorial focus. However, “publishers might start to question many of the things they do on Facebook once they start to think about the analytics in a different way,” he stated.

One way CI can help publishers do that is by more accurately valuing traffic and referrals from different sources, Ravindran said.

“CPI can be defined by the publisher to value non-Facebook traffic … and then incent their staff to grow that segment,” Ravindran said. “The first step for any publisher is having the data be smart enough to reflect their long-term goals rather than generic metrics.”

“The goal of going to where the audience is should always be to attract them to your website,” he said, adding that more autonomy would also help with the bottom line.

Although data-informed decision-making is not quite a matter of do-or-die yet, the days when understanding and engaging audiences were a nice-to-have are long gone.

“Editorial analytics are an evolving phenomenon,” the Reuters Institute study says. “It is … about developing a process where quantitative evidence supplements more qualitative editorial expertise and enables continuous evaluation of performance and experiments to improve workflows and results.”

The bottom line, however, is that it won’t be long before editorial analytics will be common in most newsrooms, no matter if they are built in-house or come from third-party providers like Content Insights.

Nikolić, who is selling monthly and annual subscriptions to larger publishers, wants to extend its service to bloggers, small newsrooms and websites soon. “Our end goal is to democratize analytics as much as possible,” he said.

Making use of editorial analytics may not be the silver bullet that gives publishers the upper hand on all of the many fronts they are fighting, but it is quickly becoming an indispensable weapon in the arsenal of media organizations near and far.

Correction: A previous version of this post misspelled Han-Menno Depeweg’s name. We apologize for the error.

On July 13, MediaShift hosted a DigitalEd web conference titled “Beyond Pageviews: Optimizing Analytics.” You can purchase a ticket for $19 to view the recording by clicking here.