How the Los Angeles Times Located Students From ’06 Immigration Protests 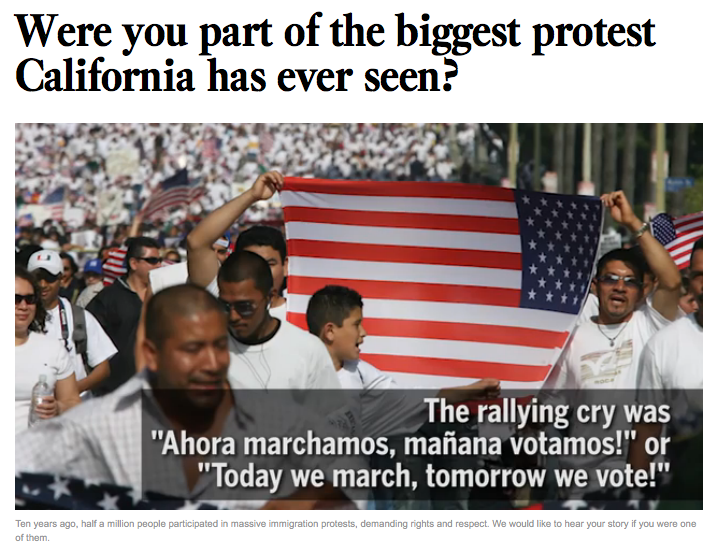 Engagement techniques helped to locate hundreds of students from more than 50 schools and explore the legacy of a social movement on multiple platforms.

Ten years ago, immigrants and their supporters took to the streets in the largest protests California has ever seen. Among them were 40,000 teenagers who walked out of class, many passing the word via MySpace. Their promise: “Today we march, tomorrow we vote.”

During an election year marked by extreme anti-immigrant rhetoric, we wanted to check back with these young people who had vowed to change immigration laws with their votes. But they were hard to find. No studies had been done on this specific cohort, which has been challenging to track because the movement did not stay cohesive.

This is how a team at the Los Angeles Times — including social media/engagement staff, videographers, designers and immigration reporters — quickly located hundreds of students who walked out of more than 50 Southern California schools in 2006 and what we did when we found them.

1. Mine the archives. Turn the images into video.

We scoured Los Angeles Times archival photos and reporting and transformed the material into a video. We also reached out to other outlets for archival materials, receiving audio of the marches from Youth Radio. (If you’re not at a paper with a big archive, consider sourcing your material from a library, local universities, historical preservation groups and online nostalgia groups.)

2. Invest in your callout efforts

Our most successful effort to generate interest was a tight social video, created from the archival images, asking “Were you part of the biggest protest has California has ever seen?” The video listed the schools that participated in the walk-out, which created a sharable hook as young adults found their schools or called out that their school was missing from our list.

More than 11,000 people shared the video on Facebook, and the millennials who walked out tagged many of their friends who participated. In all, the video reached nearly 3 million people and generated more than 8,000 responses, according to Facebook statistics, and it was one of our most successful posts of the month.

We used the video, an online post, a text callout and social media to direct young people to a form (we used Screendoor) where we asked them to share experiences and pictures from the march. We talked a lot about the questions before posting it, aiming for a clear and conversational voice for people who may or may not have been regular readers of the newspaper or website. Nearly 200 people filled out the survey, representing more than 50 different schools.

4. It’s not scientific, but that doesn’t mean it’s not meaningful

The young people who responded were not a true reflection of the 40,000 or so students who walked out of class. But the widespread response made clear to us that this moment resonated with many people. And we were able to very quickly reach a wide group, compared to finding participants through alumni associations or activist organizations. We also encountered a wide range of fascinating stories, such as a doctor in Mexico who left the U.S. because of her immigration status and a mayoral aide in New York who we most likely would not have found otherwise.

To be clear with our readers, we noted in the text that this was not a representative sample and that the stories were not on the impact of these marches on the group as a whole, but instead how the event shaped the lives of individuals.

5. Recognize some things will come up short but still are valuable

We were interested in potentially doing a wider story on other participants in the marches, and for that we tested two other methods to reach a population that would prefer Spanish or texting.

The first was asking participants to text in their experiences using Groundsource. We also translated our video, callouts and texting into Spanish working with our partners at Hoy.

While these techniques did not contribute significantly to our newsgathering efforts, they did help us test out new tools, cultivate partnerships and consider how we could reach a Spanish-speaking audience more effectively in the future.

We also planned to track down the young adults who were in the archival photos and Times coverage, but we changed our approach after reviewing the survey responses. The diversity of experiences supported a richer and more varied project that we couldn’t have done if we’d limited ourselves to the handful of stories from young people in archival photos. Instead, we followed up asking respondents to send a picture of themselves at the time of the marches. We provided specific directions for how to do a yearbook photo. Some located their yearbooks, others did not, but these clear directions helped us get the images we wanted.

Another earlier plan had been to map the growth of this movement, and each young person was asked to share how they heard news of the walkouts and which high school they walked from. We eventually decided this focused too much on the history, and visually we needed to focus our efforts.

Using social media to collect stories helped us to to locate more people faster than if we had used phone calls and old fashioned shoe-leather reporting, but it also meant we had a plethora of individual accounts to synthesize into a story.

To illustrate the transformation of high school students into military veterans, city government aides in New York and San Jose, university students and teachers, we chose an interactive approach. We selected 25 students’ stories, displaying their image from 10 years ago. When a user scrolled over each picture, it changed to an image of the present with text or video about their lives and how the walkouts impacted them.

8. Be flexible with time hooks

Truth, we started this project late. We put the callout on the anniversary of one of the larger marches, May Day, but we had missed the anniversary of the walkouts in March. Our initial thought had been to run the stories with the California primaries. Instead, we published when the U.S. Supreme Court’s deadlock on immigration was announced.

This story uses a moment in time to reflect on social change. If we hit the exact date — March 27 — that would have been great. But the anniversary story is a device to understand the impact of a social movement that can be flexible within a few months.

9. Share stories with respondents, and pay attention to what they say

In the callout survey on Screendoor, we asked if respondents wanted to know about stories. About two thirds said yes. We sent the finished stories to all of them. The response was overwhelmingly positive from young readers who said they were able to see themselves, literally, in our coverage in a way that they had not in the past. Claudia Aldana-Castan, who was an undocumented student in Watts at the time of the marches and is now a college student, wrote with the sentiments many expressed: “Thank you for letting our stories get out.”

For a solutions-oriented approach to anniversary stories check out: 50 Years After Watts: Going Beyond Anniversary Coverage and Building Community Engagement

And for more ideas about how to use audience participation: Searching for a news anniversary angle? Look to your audience

Daniela Gerson is the community engagement editor at the Los Angeles Times. As a journalist and educator, her work focuses on multiethnic communities and innovations in participatory media. She was previously the director of the Civic Engagement and Journalism Initiative at USC’s Annenberg School.