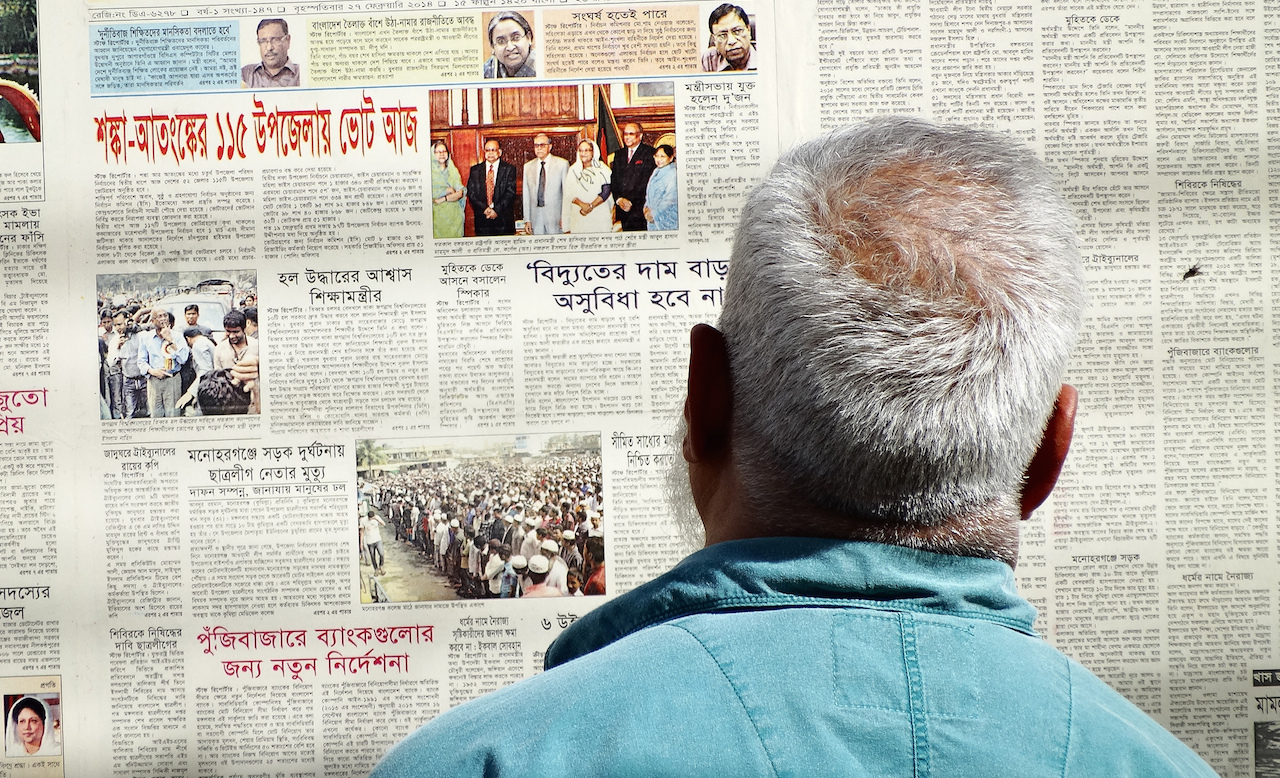 A Bangladeshi man reads a newspaper pasted to a wall in Dhaka. Photo by Adam Jones on Flickr and used here with Creative Commons license.

When Mahfuz Anam, editor of one of Bangladesh’s most respected newspapers, admitted recently to a lapse in editorial judgment several years ago, he could not have predicted the legal backlash that would ensue. Anam’s admission that he published unsubstantiated information accusing Prime Minister Sheikh Hasina of corruption has led to a barrage of defamation and sedition cases against him, along with an arrest warrant and calls for his paper, The Daily Star, to be shuttered.

"Anam's admission should lead to meaningful debate on how to strengthen journalism in Bangladesh, not provoke a swarm of legal challenges." - Sumit Galhotra

The cases filed against Anam this month illustrate the pressures faced by the country’s already squeezed independent media. Lawyers, party members, and political groups in more than 53 districts are among those who have filed sedition and defamation cases against Anam, and a court in Narayanganj issued an arrest warrant, according to news reports. The latest count by The Daily Star today shows the number of cases has climbed to 79 and the total damages being sought for defamation exceeds 1.3 trillion takas or almost USD $17 billion. Sedition can lead to life imprisonment in Bangladesh.

The legal challenges stem from Anam’s admission during a February 3 appearance on a ATN News show that during the military-backed caretaker government of 2007-08, he published information provided by the Directorate General of Forces Intelligence without seeking independent verification. At least 11 reports that painted Hasina, her political opponent Khaleda Zia, and others in an unfavorable light, were published without adequate substantiation, according to reports.

After the response to Anam’s admission on “News Hour Xtra,” The Daily Star published an editorial laying out its position. The intelligence agency has not publicly commented.

Anam called his lapse in editorial judgment “a big mistake,” reports said, a fact that should draw him credit, not condemnation. In its editorial The Daily Star noted that several years after the end of the military-backed caretaker government, journalists continue to publish information from authorities without independent verification.

A screenshot from The Daily Star’s story on the lawsuits against Mahfuz Anam.

Other outlets reported that many Bangladeshi papers had reported the same information at the time. The editor of the daily, Bhorer Kagoj, Shyamal Dutta, said during a talk show this month his paper also published such reports. He said that at the time, editors felt that they had no choice but to go along with the military, The Associated Press reported.

As Anam is held up as an “enemy of democracy” in some pro-government media, other editors have come to his defense. Dhaka Tribune editor Zafar Sobhan dismissed the reaction to Anam in an editorial, writing: “To suggest that [Anam] did so as part of some agenda to derail democracy and institute non-democratic rule is both utterly unsupported by the facts and does a grave disservice to a man who has devoted his life to the service of this nation and who has a long and proud record of serving the public interest and the cause of democracy.”

At a political event on Monday, Prime Minister Hasina called for Anam’s resignation and said editors “will be tried just like we are trying the war criminals.” Hasina’s son, Sajeeb Wazed Joy, who serves as an adviser to the government, demanded Anam be tried for treason, according to reports. Several lawmakers echoed the demand on the floor of parliament, where there were calls for the paper to be closed, the Star reported. In a February 18 post on his official Facebook page, Wazed said that the government had not filed a single case against Anam and that the cases were all civil in nature. He said Anam’s actions contributed to Hasina’s imprisonment in 2007-08 and said the cases filed against Anam were not an attack on the media as a whole.

The pressure against Anam and his paper compound to the pressures already squeezing the country’s independent media. As I noted during my visit to Bangladesh last year, since her return to power in 2009, Hasina has virtually neutralized the political opposition and with it many opposition-affiliated media outlets. Journalists at The Daily Star’s sister publication Prothom Alo told me they face legal harassment, with multiple cases filed against them from across the country including for contempt of court and defamation. Many of those cases remain unresolved. In late 2014, a special war crimes court convicted Dhaka-based British journalist David Bergman on charges of contempt after he reported on its work. And Matiur Rahman Chowdhury’s current affairs talk show, “Frontline” which was known for its critical guests, remains off air more than a year after it was suspended for what was described at the time by the channel’s chairman as temporary technical difficulties.

In October last year, Al Jazeera reported that the Directorate General of Forces Intelligence had allegedly told advertisers to stop advertising in The Daily Star and the Bangla-language daily Prothom Alo. As a result, sales of Prothom Alo — which has daily sales of more than 500,000 copies–has lost more than a third of its usual advertising revenue. The Daily Star’s revenue fell about 25 percent as of October 2015, according to Al Jazeera. (The intelligence agency denied the claims.)

If Hasina, whose party controls almost all the seats in parliament, regards herself a democratic leader, she should ensure the press is able to serve as the fourth estate. Anam’s admission should lead to meaningful debate on how to strengthen journalism in Bangladesh, not provoke a swarm of legal challenges and attacks on the independent media.

Sumit Galhotra is the research associate for CPJ’s Asia program. He served as CPJ’s inaugural Steiger Fellow and has worked for CNN International, Amnesty International USA, and Human Rights Watch. He has reported from London, India, and Israel and the Occupied Territories, and specializes in human rights and South Asia.