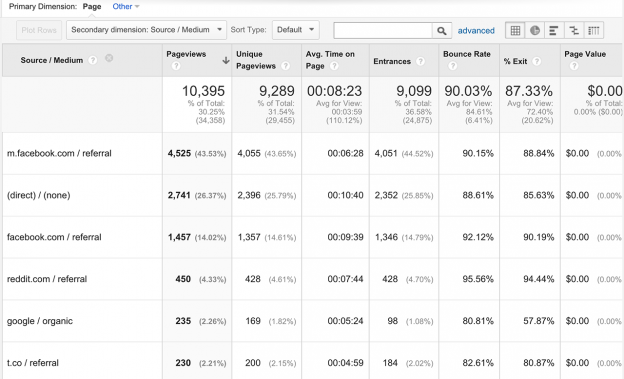 This post was originally published on the Parse.ly blog. It is republished here with permission.

A couple of years ago, NPR played a masterful April Fool’s prank on its readers after hypothesizing: “We sometimes get the sense that some people are commenting on NPR stories that they haven’t actually read.”

"But then we started to wonder...which source of referral traffic is responsible for the highest engaged time?"

To test the theory, NPR posted a link to a “fake” news article to its Facebook page with the headline, “Why Doesn’t America Read Anymore?” The post received hundreds of shares and comments from people who pretended to have read the piece. However, it quickly became obvious that most of these readers didn’t engage with it at all — because this was the actual article (shown in its entirety below).

Here’s a fascinating New York Times Insights report on the psychology of sharing.

The Real Value of Social Referrals

In 2015, the Parse.ly team spent a lot of time looking at where referral traffic comes from after learning that social media now brings in more referral traffic to top digital publishers than search — even on a story-by-story basis.

But then we started to wonder how long readers actually stay on a post after arriving from a particular referral source. More precisely: which source of referral traffic is responsible for the highest engaged time?

Parse.ly looked at the engaged time of more than one billion site visitors across 50 digital media outlets during a one-month period in 2015 to figure out which referrer type generated the longest engaged time among readers.

Perhaps unsurprisingly, we learned that social referrals led to the fewest seconds of engaged time (57 seconds per post). Search traffic fared a bit better at an average of 65 seconds per post. And finally, internal traffic generated the most engaged time per post — meaning that readers who are already on your site and enjoying your content are most likely to spend more time with that content.

That’s why recommending excellent content and encouraging audience loyalty is so important for digital publishers looking to develop their audience. However, for some publishers such as TheAtlantic.com, social remains a great way to generate traffic in conjunction with audience development goals.

Do you think that social referrals are living up to digital publishers’ expectations?

Allie works with Parse.ly’s marketing team. She spends her days telling stories about what content draws in website visitors, and why.